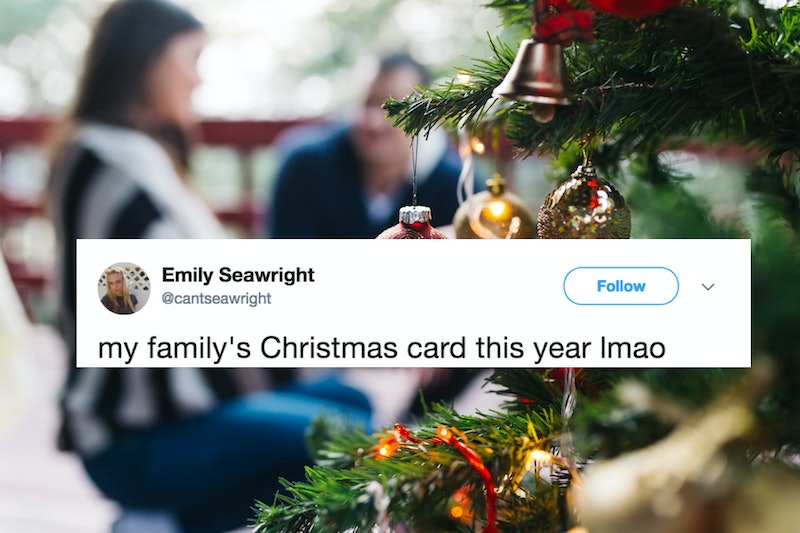 There’s an art to a good holiday card photo — but although I’ve seen plenty of beautiful and/or heartwarming ones in my day, in my mind, the prize always goes to the funny ones. Case in point: This viral "Excited, Engaged, Expecting, Emily" Christmas card photo. Tweeted by Twitter user Emily Seawright (@cantseawright) on Nov. 26, it might just be the greatest family holiday card photo I’ve ever seen. Twitter is, of course, having a field day with it, because, well… it is magnificent. Why wouldn’t they be?

Not much is known about the photo’s context (other than the fact that it’s clearly meant to be included in the family’s annual Christmas card mailing, of course); Bustle has reached out to Emily for comment and will update if/when we hear back. Despite the lack of information, though, the image speaks volumes on its own. It features a family with two parents, several grown offspring, two of those offsprings' partners, a small child, and a dog. The humans in the photo are all holding signs communicating a lot of big, exciting news: The parents are “Excited”; one couple is “Engaged”; and one couple is “Expecting.” One woman, however, stands out from the rest — she’s posed solo, and her sign just reads, “Emily.”

The contrast between Emily’s sign and the others is obviously what makes the photo funny — although in all honesty, I also kind of love the subtle message it imparts if you read a little deeper into it. It’s awesome to be excited, engaged, and/or expecting, of course; however, it’s also awesome just to be yourself, regardless as to whether you're partnered, a parent, or a parent-to-be. That’s pretty rad all on its own.

Interestingly, though, this isn’t the first time this kind of image has made the rounds. In 2015, a photograph featuring a similar “Excited, Engaged, Expecting” setup and a lone man with an “Engineering” sign as the punchline was uploaded to Imgur; you may have also seen a Photoshopped version of that image making the rounds wherein the “Engineering” sign was edited to read “Egg Salad.” Either way, though — engineering, egg salad, or Emily — it’s a joke that still lands, and I love it.

So does Twitter, of course; in fact, a lot of the responses to Emily’s family Christmas card photo are as funny as the photo itself is. A lot of people are making the same jokes (good to know we’re all on the same page here), so what you’ll see below is just a small selection of the superb reactions out there; they’re relatively representative of the whole, though, so if you had some similar thoughts, know that you’re in good company.