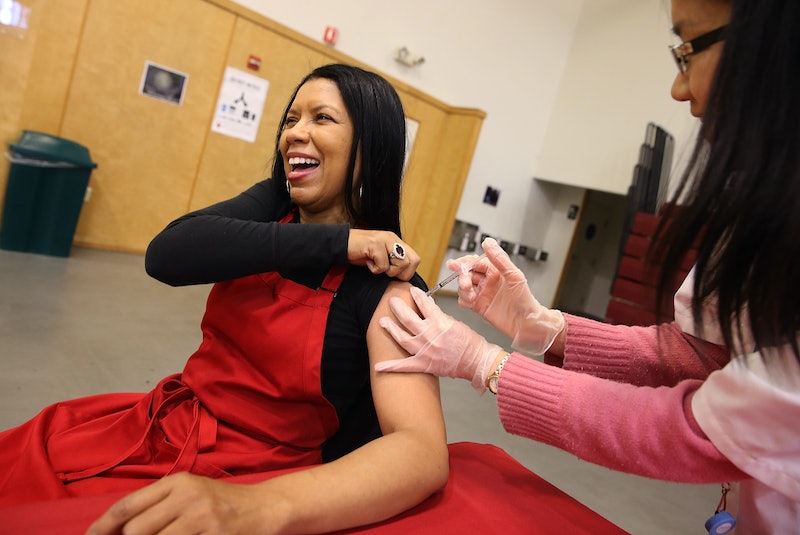 Have you gotten your flu shot yet? If not, get thee to a clinic, POSTHASTE. No, really — go now. Influenza is on the rise, and the type of flu that’s predominating is a particularly nasty strain. According to the CDC, this year, flu season will be worse than last year, so it’s especially important that people take steps to prevent flu infections and to treat the illness properly if they do get sick.

In a December 30 statement, the Centers for Disease Control and Prevention (CDC) reported that there has been “a slow but steady increase in [flu] activity during November and early December” and warned that “[f]lu activity is expected to increase further in the coming weeks.” This data comes via the U.S.Outpatient Influenza-like Illness Surveillance Network, which reports the incidence of influenza-like illnesses among patients visiting a network of 2,800 doctors to the CDC on a weekly basis. The CDC also noted that the “percentage of respiratory specimens in clinical laboratories testing positive for influenza” has been increasing.

As if that weren’t bad enough, the CDC reports that the type of flu that’s going around this season — known as “H3N2” — is especially severe. In previous years when H3N2 has predominated flu season, flu patients have had more severe illnesses and higher rates of mortality. Although it’s impossible to say whether H3N2 will continue to dominate this flu season, the CDC warns that, if it does, young kids and the elderly “may be more severely impacted” than usual.

The takeaway from the CDC’s report is that people should do their best to avoid getting sick — which means washing hands thoroughly, staying away from people who are ill, and getting vaccinated. (And if you do get sick, be sure to take antiviral medication.)

If you haven’t gotten your flu shot yet, it’s not too late. Flu season lasts all the way until March, so getting vaccinated now will still give you months of protection. Getting the shot isn’t exactly fun, but it’s a hell of a lot more entertaining that feeling like a walking corpse for two weeks and struggling to recover while your friends avoid all physical contact with you. Keep in mind that the flu vaccine takes a couple weeks to fully kick in, so you should get your shot ASAP.