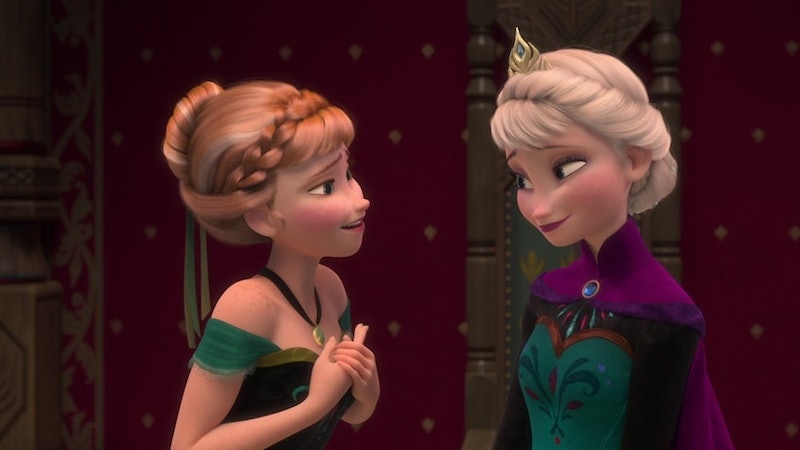 It's another thing Frozen fans won't be able to let go. A new Frozen 2 cast photo hints at Sven's role in the new film thanks to a curious Instagram tag. One that teases Sven might have a voice this time around that possibly sounds a lot like Dwayne "The Rock" Johnson. (Bustle reached out to Disney for comment regarding The Rock's potential involvement in the film.)

On Wednesday (Jan. 30), Josh Gad, better known as Olaf, posted a photo of the Frozen 2 cast — Kristen Bell, Idina Menzel, Jonathan Groff, and a stuffed Sven – getting very cozy and kissy. The caption was curious: "Soon enough..." he wrote, but the tagging of the photo was even curiouser.

While Bell and Menzel were appropriately tagged, Gad also tagged Santino Fontina, who originally played Hans in Frozen and isn't actually in the photo. Perhaps, a hint that Hans will be returning for the sequel, which hits theaters Nov. 22, a week earlier than originally planned.

But, Gad also tagged The Rock as Sven, you know, Kristoff's reindeer who didn't say anything in the first film. Could this photo be a clue that The Rock could play a role in Frozen 2? Fans sure hope so.

While Johnson has yet to publicly comment on this photo, fans have already started hypothesizing that he could be a part of this new movie, which one fan dubbed "Frozen meets Moana." Others were excited at the prospect that Sven could have a voice in this movie that will reportedly take place outside of Arendelle.

But as someone pointed out on Instagram, this could all just be a little Moana callback. "Everyone freaking out about the Rock as Sven," the user @rosiedawn16 wrote, "remember when Maui got his hook back & couldn't shapeshift right? He turned into Sven for a split second, along with a fish, shark, iguana, bug, & pig. Maybe he's referencing that."

It's possible that's all it is a Disney family joke since The Rock hasn't been announced as part of the Frozen 2 cast. Westworld's Evan Rachel Wood and This Is Us's Sterling Brown are reportedly in the new movie, though.

While not much is known about the sequel, the movie's producer Peter Del Vecho told Entertainment Weekly in 2017 that the Frozen sequel will change how you think about the first movie. “Now that we’ve been involved in it for awhile, what’s exciting is it feels like it builds on the first movie,” he said. “You understand things better in the first movie after you’ve seen the sequel.”

It's also possible that fans will get to see the first teaser for Frozen 2 soon. While some are too busy wondering whether or not The Rock will be in Frozen 2, this Insta could just be clue that the first trailer for the movie is coming very soon. Possibly, as soon as this Sunday during the Super Bowl. That would definitely be the appropriate arena for this much anticipated sequel, right?

Or, maybe it'll run during this year's Oscars since those are right around the corner — Sunday Feb. 24, to be exact — and air on ABC, a Disney-owned network. Of course, this is all just speculation since all Gad's photo did was leave fans with more questions about Frozen 2 than answers. Let's just hope the latter will come "soon enough."

More like this
At 28, Lesley Manville Was Acting, Picketing, & Singing Kate Bush Songs
By Olivia-Anne Cleary
Reese Witherspoon Gave Fans Hope For 'Legally Blonde 3' After This Surprising Movie Inspired Her
By Jake Viswanath
22 Movies On Netflix That Are Perfect For The Whole Family
By Bustle Editors
Why Did Meatball Leave 'The Bachelorette'? His Second Chance Didn’t Last Too Long
By Grace Wehniainen
Get Even More From Bustle — Sign Up For The Newsletter