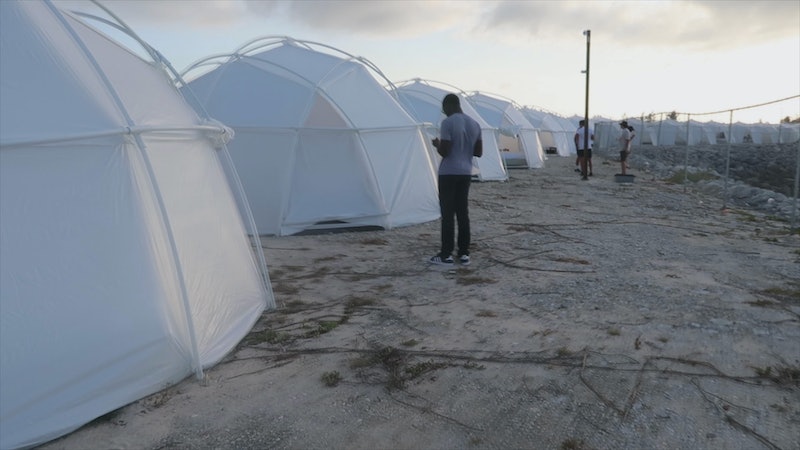 The recent documentaries on the chaotic 2017 Fyre Festival fallout has people, involved or not, reliving the trauma all over again. One of the victims who's gone public with their struggles is Maryann Rolle, owner of the Exuma Point Resort, who was hired to cater the failed event. Rolle started a GoFundMe campaign last week after spending $50,000 from her own savings to pay employees due to never being compensated by Fyre for their work. After just one week, the Fyre Festival employee raised more than she intended to by surpassing her initial goal.

After eight days of fundraising, Rolle has raised $167,373 by people presumably moved and saddened by her story. Her original goal was $123,000. As of Tuesday, the GoFundMe page has been shared over 6,000 times. Rolle appeared in the new Netflix documentary FYRE: The Greatest Party That Never Happened to explain how the events and her involvement with them unfolded.

Hired to feed both festival goers and workers, Rolle said in the film that she had 10 people working with her preparing food for 24 hours straight. “I went through about $50,000 in my savings that I could of have had for rainy day and they just wiped it out and never looked back,” she explained with tears in her eyes. “Personally I don’t even like to talk about the Fyre Festival. Just take it away and let me start a new beginning because they really, really, really hurt me." The Hulu documentary Fyre Fraud also showed dozens of local workers who were never paid for excruciating hours and labor.

The Fyre Festival has become synonymous with this viral photo of food that was served to people stranded on the island of Exuma, including bread, cheese, lettuce, and tomato. Originally, customers were promised extravagant food like local seafood, a pig roast, and Bahamian-style sushi (among other experiences and accommodations), according to People. As explained in Netflix's FYRE, Rolle was hired after festival creator Billy McFarland allegedly fired esteemed restauranteur Stephen Starr.

Event planner Andy King explained that Fyre had a $6 million contract with Starr and when they only had $1 million, McFarland fired Starr over the phone. "I stood there and he said, ‘Can you salvage this?'" King says in the film. He recalled thinking, "'Oh my gosh, I have two weeks to come up with food service for 6,000 kids. This is going to be fascinating.'”

Some are skeptical about the GoFundMe and wondering if it's another scam. However, there's a photo of Rolle on GoFundMe holding a sign reading, "THANK YOU GoFundMe" with a heart. She explains more about her story on the page, writing:

"Back in April 2017 I pushed myself to the limit catering no less than a 1000 meals per day. Breakfast, lunch and dinner were all prepared and delivered by Exuma Point to Coco Plum Beach and Roker’s Point where the main events were scheduled to take place. Organizers would also visit my Exuma Point location to enjoy the prepared meals."

She further admitted it was "embarrassing" revealing she was never compensated, saying, "I was left in a big hole! My life was changed forever, and my credit was ruined by Fyre Fest."

In October, McFarland was sentenced to six years in prison for fraud. Meanwhile, it's been reported that Fyre Fraud ticket holders haven't been refunded unless disputing the charges to their bank. The situation is clearly still ongoing, but hopefully more victims will get help sooner rather than later.