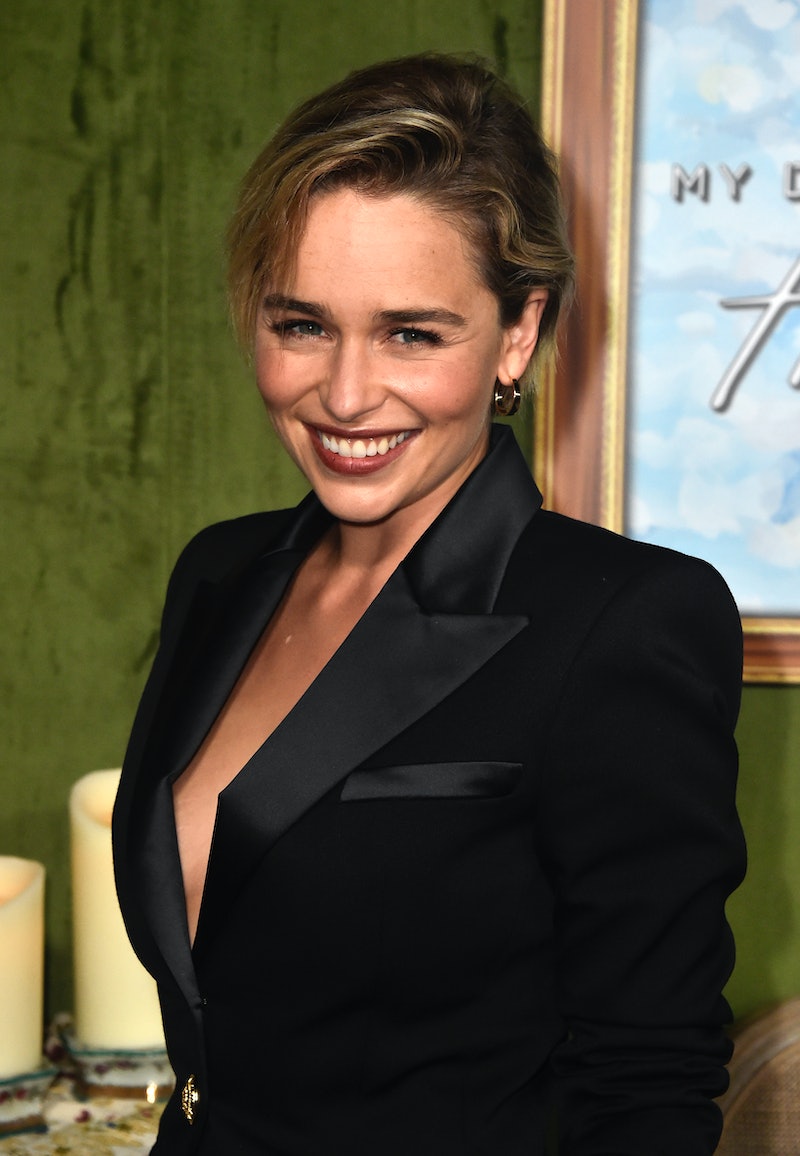 As excitement continues to build ahead of the long-awaited debut of Game of Thrones' final season, a new contest will give a lucky fan (and a friend) the opportunity to attend the GoT premiere as a guest of Emilia Clarke and the details couldn't be more thrilling. Entertainment Weekly reports that the winner of the contest, which is being run by Omaze, will be flown to New York City where they will enjoy a stay in a 4-star hotel and attend the HBO premiere alongside Clarke at Radio City Music Hall in NYC this April. In addition to being one of the first people to view the return of the show's final season, Omaze reveals that the guest will also get to walk the red carpet and share in a toast with Clarke at the official after-party.

Omaze's website reveals that fans can enter by making a donation to a listed fundraiser of their choice. For every $10 donated, fans will be given an additional entry into the contest. Participation will also give contestants the eligibility to win exclusive GoT merchandise. Omaze's rules page additionally indicates that interested candidates may also enter for free by going to the campaign page on Omaze.com and choosing the Alternative Method of Entry option. The website shares that the deadline to enter the contest is listed as March 20, 2019 at 11:59 pm PT with the winner being announced on or around April 3, 2019.

The contest certainly makes the hype surrounding GoT's Season 8 premiere that much more exciting for fans who would love the opportunity to meet Clarke, and potentially, some of the other stars from the beloved franchise.

It seems that watching GoT with Clarke has been quite the hot ticket for fans of the show. In January 2018, Variety reports that Brad Pitt offered to pay $120,000 to watch an episode of the fantasy drama with Clarke, who plays Daenerys Targaryen, mother of dragons on the cable series. The outlet notes that Pitt bid the six figure amount during a silent auction at Sean Penn’s annual charity gala for Haiti, but was eventually outbid by a gala-goer who ended the auction at $160,000. The Ocean's Eleven actor initially bid $80,000, then outbid himself with a $90,000 offer. When actor Kit Harington, who portrays Jon Snow AKA King in the North, revealed that he would join in on the episode viewing, Pitt raised his own bid to $120,000, according to Variety.

Although news of the franchise's ending has left fans with bittersweet feelings, the series and its finale have seemingly drummed-up a great deal of interest about the show's characters and how they will end up. While many details surrounding the Season 8 narrative still remain scarce, the announcement of a reunion episode has given fans the hope of reliving the glory of the show along with some of their favorite characters.

In November 2018, Entertainment Weekly confirmed that a Game Of Thrones reunion special is scheduled to be released sometime after the series' final episode. Vanity Fair additionally reported that the reunion gathering, which will be hosted by GoT fan Conan O'Brien, will cover the making of the series while featuring commentary from many actors from the show, both past and present, including Clarke, Harington, Maisie Williams, Sophie Turner and Sean Bean. The special was reportedly filmed earlier this year in Belfast, Ireland, the city which has been known as the show's home base since 2011. Instead of airing on HBO, the bonus feature will be included as part of a home video box set that will feature all eight seasons of the show, according to EW.

As one of the most popular franchises of the past decade, Game of Thrones and its cast have completely stolen the hearts of fans everywhere. So it's safe to say that this contest is going to make one lucky viewer a very happy camper.