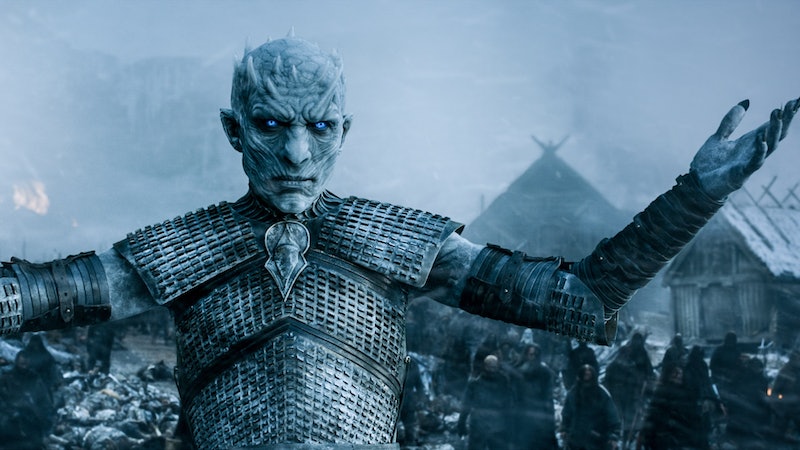 Winter has finally come around in Westeros, and it looks like some dark things are in store for our friends on Game of Thrones. As last week's season premiere revealed, the White Walkers are planning an attack on Castle Black and there's a fan theory about GoT's opening credits maybe having a clue on how they might be able to make their way across The Wall.

According to a thread on Reddit, a screenshot of the opening credits in Season 6 shows The Wall surrounded by a body of water, meaning that if anyone were to attack Castle Black, they would likely have to find a way to get over that 700-foot wall first. But another screenshot of the opening credits from last week's premiere shows that the water surrounding The Wall has now frozen over, which could make it fairly easy for the White Walkers to simply walk around and attack.

During last week's Season 7 premiere, fans watched Sandor Clegane, aka The Hound (Rory McCann), coming to an interesting realization after he has a vision while looking through the fire and claims to see the dead marching past The Wall.

“It’s where the Wall meets the sea. There’s a castle there. There’s a mountain, looks like an arrowhead. The dead are marching past. Thousands of them,” he says.

A lot of fans may have probably been wondering just how the White Walkers were going to get around The Wall, and now this subtle clue may have finally given it away. Though it's a little anticlimactic, it's not too out of the ordinary, and it actually kind of makes sense. Talk of winter coming has been prevalent on the show since the very first season and, though it already looks like the climate over at Castle Black isn't very fun to deal with, things were obviously only going to get worse. They had to see this one coming, right? Either way, it's not looking too good for the men at The Wall.