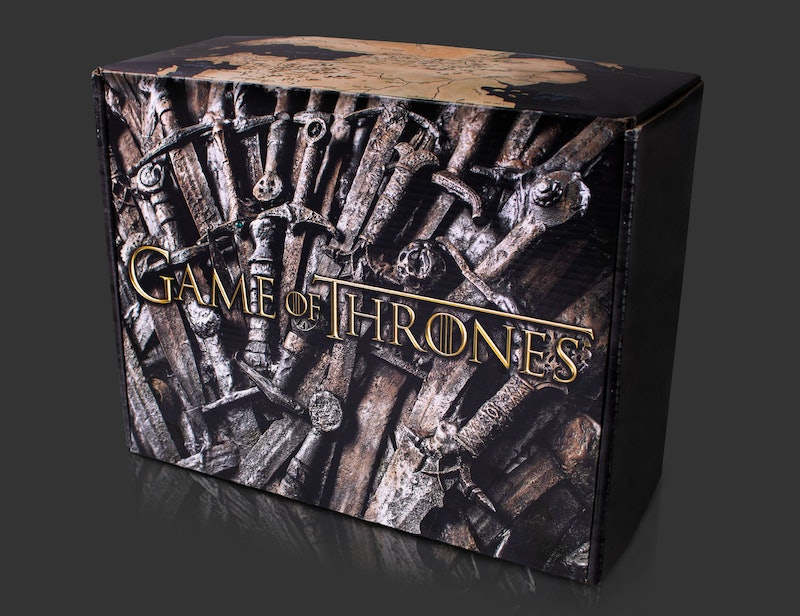 Can’t get enough Game Of Thrones? Here’s a delightful gift to bestow upon your favorite fan—or yourself: Every few months, this Game Of Thrones subscription box from CultureFly brings all the treasures of Westeros right to your door, allowing you to declare your allegiance for the Great House of your choice, to show those White Walkers whose boss, or simply to drink and know things, depending on your priorities. I can’t guarantee that you’ll find any dragon eggs inside, but hey, stranger things have happened, right?

CultureFly has been around at least since 2016 and specializes in licensed pop culture merch. You get a lot of items on their own — their T-shirt selection, for example, is extensive — but if you like surprises, you can also opt for one of CultureFly’s subscription boxes. Generally released quarterly, boxes are priced at $49.99 a pop and guarantee at least $100 worth of merch and gear in every box. Usually, you’ll get somewhere between six and eight items per box, many of which are exclusive or hard to find elsewhere. Offerings include a Supernatural box, a DC superhero and supervillain box, a Nickelodeon box (calling all ‘90s kids), and a Pusheen box. Subscriptions auto-renew, but you can cancel at any time.

Culture Fly hasn’t posted spoilers or complete box contents on their social media feeds for all of the boxes, but they have done it for a few of them. The first box, for example, included a little vinyl figure of Ghost, a House Tyrell planter, a House sigil stamp set, a House Stark sigil notepad, two items themed after House Targeryen and House Greyjoy, a drinking horn (!), and what looks like an oven mitt designed to look like Jaime Lannister’s golden hand:

I’ve gotta say, that oven mitt is pretty spectacular. A bit morbid, perhaps, but spectacular all the same.

Additionally, you can get a look at a few past boxes if you run the URL for Game Of Thrones box’s landing page through the Wayback Machine and take a look at some of the snapshots that have been taken of the page over the past year. Doing just that is how I learned that the third box included an apron that reads “IN THE GAME OF THRONES, YOU GRILL OR YOU DIE,” so, y’know, A-plus on the cheesy-but-wonderful joke front there, Culture Fly.

The fourth box has been available for some time, so images of its contents are available both on Instagram and on the box’s website. Warning: Below are spoilers for the FOURTH Game Of Thrones box. If you’re considering getting one, but you want to keep the contents of the box a surprise for yourself, stop reading now. (And, uh, given that the items are displayed on the box’s website, block the right side of your computer screen from view when you navigate over there to spare yourself errant spoilers.)

Since the current box’s theme is Great Battles of Westeros, everything in it is festooned with the sigils of all the Houses who have been at war during the series. A dry erase board featuring the House Mormont sigil, a throw blanket with an overall pattern of a variety of House sigils, what looks like a T-shirt, a little statue of the House Targaryen sigil, another small item with the House Targaryen sigil and words, and set of four plates featuring the sigils for House Frey, House Lannister, House Stark, and House Bolton. Click or swipe through this Instagram post to see all the items:

The House Bolton plate is hiding behind the House Stark plate; you can see it more clearly over at Culture Fly’s website. And if you click or swipe through this older spoiler post, you can see the throw blanket in all its glory:

Each box CultureFly releases is limited edition; only a certain number are made, so when they’re sold out, they’re gone for good. It’s also worth noting that right now, it’s not clear whether the Game Of Thrones box will continue after the fourth one; after all, the series is wrapping up on May 19. A few folks have left comments on some of CultureFly’s Instagram posts about the latest box asking if the current box is the last one, but the company doesn’t seem to have posted any responses to those questions.

In the meantime, though, the fourth box is still available. Head here to nab one for yourself. Are you ready to take your place upon the Iron Throne?