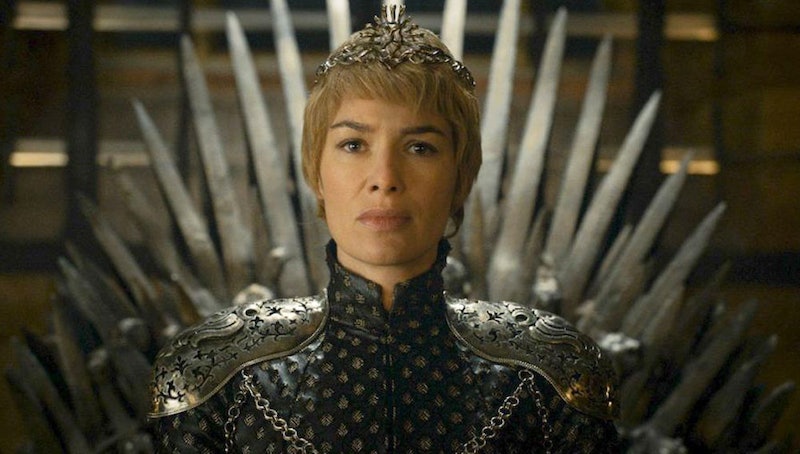 OK, so here we go with another potential Game of Thrones Season 8 spoiler. With the show being based on books, not only do we have the telly for hints, but fans can also trawl through the pages of George R. R. Martin's tomes for clues about what's in store next series. Recently, some eagle-eyed fans stumbled across a Game of Thrones theory about Cersei Lannister’s death that could change everything. In fact, it's almost too much to handle.

On the off chance you have been on a TV/social media/media/everything shutdown for the last seven years, and aren't familiar with Cersei, she is the female boss of the rich as hell, cunning as heck, and brassy blonde Lannister clan. Not female boss in the Tulisa sense, but more in the evil, power-hungry, and willing to do anything to get to the top sense. So like, not as empowering as it sounds.

Many fans that are eagerly awaiting Game of Thrones Season 8 might well be pleased to hear that villain du jour herself, Cersei, might soon leave this mortal coil. But how could such a mighty oak be felled and who in the name of Ned Stark could manage such a feat? Prepare for your mind to be blown.

Since the sad and untimely death of her second eldest son Tommen, who sadly chose to take his own life at the end of Season 6, Cersei has been the head of the family as well as the top dog in Westeros. She has been ruling the Seven Kingdoms with an iron fist and it's safe to say, she is a very feared and disliked leader. Even her own brother/lover Jaime Lannister is starting to have his doubts. So, will she finally get her comeuppance next series?

Desperate to find out what awaits Cersei, eagle-eyed fans have been trawling through R.R. Martin's books looking for subtle hints. And by the sounds of things, it appears as though all that digging has paid off. One super fan on Reddit has done some serious ground work and reckons he knows that Cersei is definitely going to be killed and how.

Majid Alammari found an excerpt in Martin's book A Clash of Kings which suggests that Arya Stark will murder Cersei. Arya, who has a few erm, shall we say, issues with Cersei (and others) that need resolving, has learned to be a master assassin from the uber mysterious Faceless Man. Now, she likes to kill to feel better about everything that's happened to her family, and Cersei has been at the top of her list for a while now, so this fan theory is actually very plausible.

The telling excerpt in the book reads:

"On that we agree," Tyrion smiled. "And for Ser Cortnay’s death, well, we know Stannis hired sellsails from the Free Cities."

"Perhaps he bought himself a skilled assassin as well."

"A very skilled assassin. There are such. I used to dream that one day I'd be rich enough to send a Faceless Man after my sweet sister."

Wait. Sorry, is that Tyrion saying he is going to hire Arya Stark to kill his sister? Oh, my days, this family makes your average family barney look like a walk in the flipping park, doesn't it?

However, as another Reddit user, LordDragon88, pointed out, Game of Thrones fans shouldn't take what the books say as gospel, explaining: "Prophecies aren't a guarantee and they can be read a hundred ways and mean that and more."

Well, I suppose this prophecy really could mean a hundred different things and is changeable with time.

Needless to say, the scriptwriters over at Game of Thrones HQ have had a mammoth task trying to satiate the wants and needs of fans. However, after that Season 7 finale, I'm in no doubt that Season 8 will deliver and have us all screaming at the telly. Perfect night in, really.