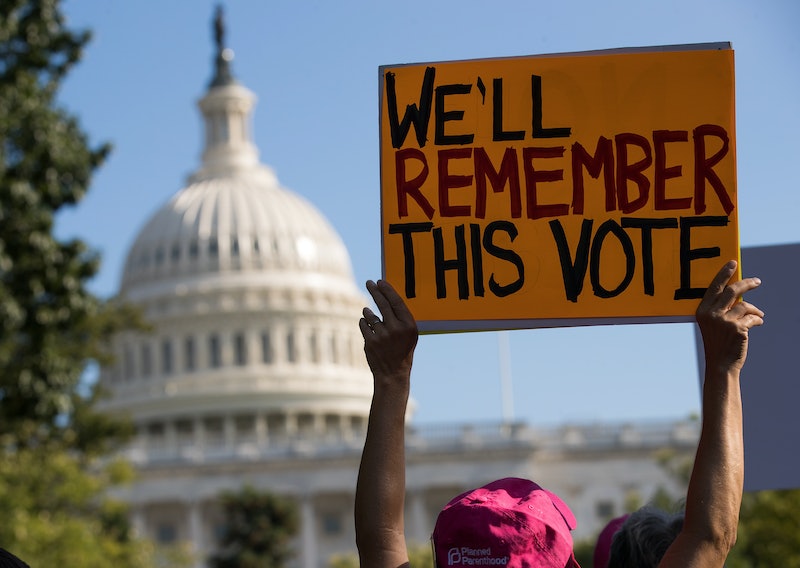 On Monday, a piece of anti-abortion legislation in Georgia moved one step closer to becoming law. The so-called Georgia "heartbeat" abortion bill, or HB 481, passed the state's Senate Committee on Science and Technology, with the vote falling along both gender and party lines. That three Republican men voted in favor of moving the bill forward, and two Democratic women voted against it, was a fact not lost on the bill's opponents.

"I think that sends the message loud and clear that lawmakers who are voting in support of HB 481 don’t care what their constituents have to say and don’t care what the women of this state have to say," Barbara Ann Luttrell, Director of Communications for Planned Parenthood Southeast, tells Bustle. She pointed to the crowd of protestors who gathered at the state capital to protest the bill, as well as to testify against it.

"That’s very dangerous for them and their seat," Luttrell says of the male senators who voted to pass the bill out of the committee. "Because women are watching, and women will be voting against them in the next election if they’re voting against women’s rights this legislative session."

HB 481 would make abortions illegal once a "fetal heartbeat" is detected, which is roughly six weeks into gestation, and also before many women even know that they are pregnant. The bill would provide exceptions in instances of rape or incest — so long as there is a police report, as well as if the woman's life is in danger or the fetus has severe health problems, according to Atlanta NPR affiliate WABE. It's important to note that the term "fetal heartbeat" does not necessarily refer to an actually beating heart. Rather, medical professionals told HuffPost, locating a "fetal heartbeat" may just mean that there is detectable cardiac activity.

Republicans are currently in the majority in Georgia's state Senate, which means this governor-supported bill may move quickly through the chamber. However, bills like HB 481 often face lawsuits the moment they are signed into law, meaning it's likely that this would face a battle in the courts. Notably, these so-called "heartbeat bills" have historically failed to stand up to legal challenges in the long run. But as the Associated Press reported Monday, many anti-abortion advocates appear emboldened in light of the Supreme Court's current conservative majority.

Democratic state Sen. Valencia Seay, who attempted to push through amendments altering the bill on Monday, said in committee that she was tired of her male colleagues couching their anti-abortion legislation in terms of "common sense."

"Common sense comes from us who have delivered, who have given birth, and who respect women making a choice for themselves," Seay said, at one point gesturing to the only other voting woman on the committee, state Sen. Jennifer Jordan. "And I just wanted the record to say that my heart is heavy."

"No man can give birth," she added. "So I just do not appreciate consistently hearing 'common sense' as if I don’t have common sense."

Luttrell points to Seay's comments while speaking with Bustle. "If the committee members cared about trusting doctors or trusting women, or if they cared about common sense or being medically and legally sound — as the bill’s sponsors claim — then they would listen to the lines of people blocking off their day to make their way to the capitol to testify in opposition to HB 481," she says.

Indeed, after committee members voted to move the bill forward, protestors outside the room began chanting "shame, shame," according to video circulated on Twitter.

"It is certainly not that they’ve not heard from their constituents," Luttrell says. "It’s just that they’re not listening."