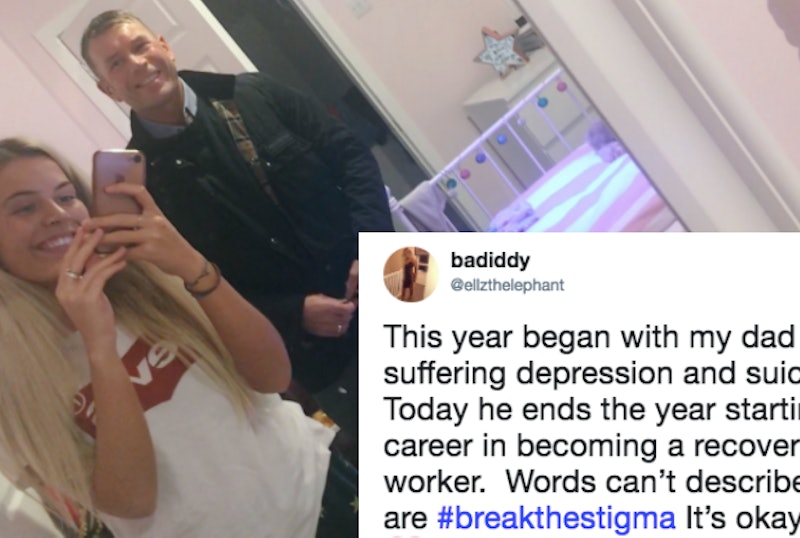 Mental health stigma has long been a major issue worldwide — and sadly, it's still ongoing today, making efforts to break the stigma more important than ever. A young woman’s tweet about her father’s depression has done just that, drawing attention not only to the importance of mental health awareness, but also to the hope that things can and do get better. What’s more, the very fact that the tweet has gone viral in the first place offers even greater encouragement: Not only are people speaking out about these important issues, but moreover, people are listening to them.

In June of 2014, Brian Wilkie’s son Jordan, then 22, died by suicide. As a result, Wilkie’s daughter Ellie tells Bustle, “Mental health is massive in my family”: The loss of Jordan, who was Ellie’s step brother, “stemmed [her] dad’s depression and ultimate breakdown.” After the first anniversary of Jordan’s death, Wilkie sought treatment — but it can sometimes take a lot of trial and error before finding effective treatment, and he began to feel worse. In January, he attempted suicide in the family home in Edinburgh.

But he survived — and he’s been on the road to recovery ever since. It hasn’t been easy, of course, for Wilkie or for his family; says Ellie, “In the beginning, my whole family fell into the darkest hole. As my dad was the rock, him falling apart left [us] lost and unable to see a breakthrough.” But he sought help: He’s received specialist treatment, he began going to the gym regularly, he gave up alcohol, and he puts his energy towards helping others. He is now a recovery support worker.

The family, too, has recovered along with Wilkie. “As my dad gained the help, the family did, too,” Ellie tells Bustle. “My dad’s headspace was so low with depression he truly couldn’t see the family around loving and support[ing] him. His recovery has now meant we are stronger and closer than ever.”

In tribute to Wilkie’s recovery and her family’s strength, Ellie posted a photograph of her dad and herself to Twitter on Nov. 22. The photo is simple; taken with a smartphone in a mirror, it shows father and daughter in her bedroom, both smiling together. “This year began with my dad mentally suffering depression and suicide attempt,” she wrote. “Today he ends the year starting his new career in becoming a recovery support worker. Words can’t describe how proud we are.” Using the hashtag #breakthestigma, she added, “It’s OK not to be OK.”

And she’s right: It’s OK not to be OK. And we need to make sure that message is heard loud and clear.

This is why breaking the stigma is so important — and acknowledging that, as Ellie puts it, it’s OK not to be OK can go a long way towards accomplishing that goal.

Ellie’s Twitter post went massively viral; as of this writing, it has received nearly 30,000 retweets, almost 170,000 likes, and hundreds of replies expressing support and solidarity. The ITV morning television program This Morning even reached out to the Wilkies to feature their story on the show; however, news of Prince Harry and Meghan Markle’s engagement unfortunately resulted in the segment getting pulled.

This Morning released a statement on Twitter about the schedule change, writing, “Unfortunately due to yesterday's breaking news, we had to reschedule some of our planned features. Ellie and Brian had prior commitments this week, but we have extended an open invitation so they can share their story with us when they next become available.”

Some Twitter users have noted that the schedule change is problematic, especially consider that both princes — Harry in particular — have made mental health awareness a large part of their work; however, the Wilkies’ story is still being told loud and clear: Media pickups include those ranging from the BBC to BuzzFeed, and the power of social media has continued to pass along the family’s message of hope.

Ellie describes the story going viral as “scary yet amazing.” She tells Bustle, “I knew it had the public captivated because it’s clear they need this. Mental health is a taboo hidden away and never spoken about. We are just real people with a real story hoping to engage the public to help save people in their darkest days.”

For those who may either be dealing with something similar to that which her dad and family have gone through, or for those who know someone who is, she has these words of advice: “In the beginning, you may feel resentful towards [your] family member; however, my advice is, stick by them regardless. They will need it and thank you for it. Keep your family together and reinforce constantly that it’s OK not to be OK. Eventually there will be light. It will take constant effort; however, with love and support, we can end the stigma.”

If you or someone you know might be at risk for suicide, you can call the National Suicide Prevention Lifeline at 1-800-273-8255 in the United States and the Samaritans at 116 123 in the UK.

More like this
6 Abortion Advocates To Follow On TikTok
By Sara Youngblood Gregory
8 TikTok Pasta Recipes To Try Out At Home
By Emma Garza
TikTok’s “5-9 Routine” Trend Is Here To Boost Your Productivity
By Courtney Young
What Is "The Ick?" The TikTok Dating Term, Explained
By Courtney Young
Get Even More From Bustle — Sign Up For The Newsletter