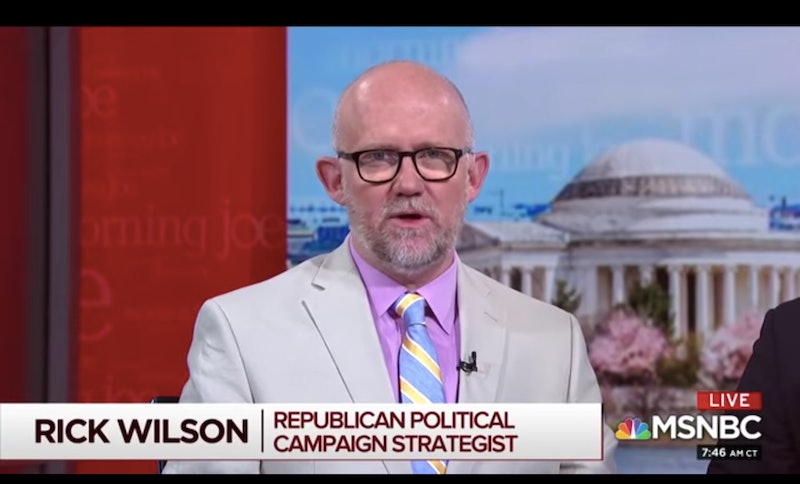 During an interview on MSNBC Monday, a GOP strategist's rant about Trump and his supporters was bleeped out by the network, leaving viewers to wonder what exactly the strategist was saying about the president's base. Rick Wilson, a longtime conservative Trump critic, later explained on Twitter that he was seeking to further clarify his comments regarding congressional support of Trump when his interview was briefly muted by MSNBC.

Wilson appeared on MSNBC's Morning Joe to discuss his new book, Everything Trump Touches Dies: A Republican Strategist Gets Real About the Worst President Ever. During the interview, Wilson was asked by host Joe Scarborough about how he would explain the Republican party's welcoming reaction to Trump. In his response, Wilson first suggested that Trump has been a long-awaited leader for many members of the party, noting:

They love the fact that Donald Trump finally gives them this sort of id of the Republican Party ... They’re finally given permission to say the ugly things they kind of wanted in their secret hearts for a long time, and the monster got out of its cage in terms of a lot of the populist messaging that worked to motivate Republican primary voters for a long time.

However, Wilson then added that he believes there are many people who don't support Trump, but will not say so publicly. "There's a bigger never Trump movement out there," Wilson asserted. "There's just a huge courage deficit in this country."

Right after he uttered this sentence, Wilson's audio was muted and viewers could only see silent video of him speaking and gesturing. On Twitter following his interview, Wilson noted that, while he was muted, he had been reflecting further on the "courage deficit" of members of Congress when it comes to denouncing Trump. As Wilson wrote: "I said 'Washington is full of profiles in chickens***. You and I both get calls from members of Congress who say I can't stand this a**hole.'"

Audio was returned to the interview after about seven seconds of silence. When the sound resumed, Wilson was still discussing lack of congressional support for Trump. "These guys [members of Congress] call us and they express this unbelievable, this disgust with Trump. They’re not all bought into this," Wilson asserted. He then indicated that he believes that there are only around 40 to 50 members of Congress who completely support Trump.

For their part, Morning Joe's hosts, Scarborough and Mika Brzezinski, reacted to Wilson's bleeped comments with a bit of surprise. Brzezinski questioned Wilson afterwards, saying, "Are you saying that on TV?" Scarborough also told Wilson that he owed him a dinner, referencing the seven-second delay that had been implemented by MSNBC.

On Twitter after the interview, Wilson also expressed surprise that his words had received so much attention. He jokingly noted that if people considered his reflection on Trump supporters an "expletive-filled rant," they needed to "get a lot out more."

Thus, MSNBC's (and the public's ) reaction to his comments may have come as a surprise to Wilson. Nonetheless, the comments indicate the steadfast nature of Wilson's opinions on Trump — and perhaps provide some food for thought regarding how members of Congress truly perceive the president.