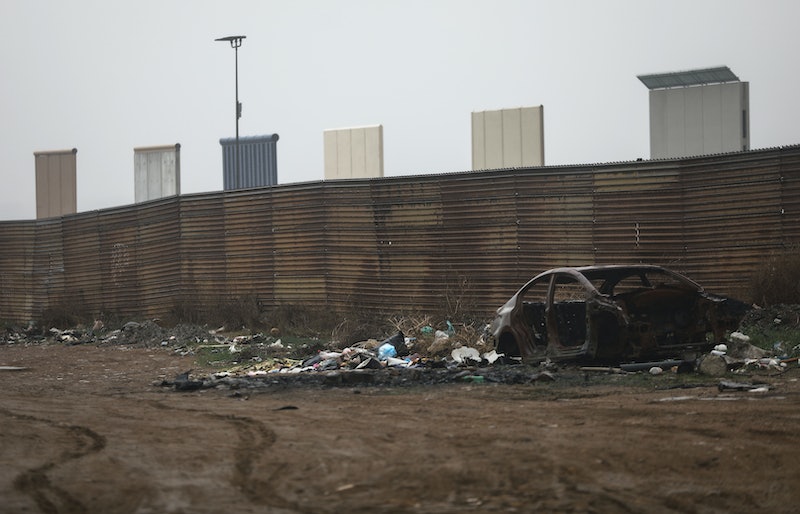 As of July, the latest info from a government report on Trump's border wall reveals that the project is at risk of blowing through the budget too quickly, not meeting deadlines, and generally not working as well as it was supposed to. The report, which was released by the Government Accountability Office, also found that the Department of Homeland Security (DHS) hadn't completed the full analysis necessary to build the wall efficiently.

The report reads in part,

DHS plans to spend billions of dollars developing and deploying new barriers along the southwest border. However, by proceeding without key information on cost, acquisition baselines, and the contributions of previous barrier and technology deployments, DHS faces an increased risk that the Border Wall System Program will cost more than projected, take longer than planned, or not fully perform as expected.

Trump's wall has been one of his more controversial (and kind of confusing) endeavors in office. In March, a spending bill of $1.6 billion dollars for border barrier funding was approved by Congress, but White House officials have suggested that the cost of the wall will be way closer to $8 billion — and with these delays, it could cost even more. But no one has clarified where that additional funding will come from.

And that's not the only piece of conflicting information about Trump's wall. Trump has insisted as recently as July that the construction of the wall has already begun, when in reality the only part of the "wall" that's been completed has been the replacement of seven miles of fencing, which were already scheduled to be replaced.

Regardless of the actual cost of the wall, there's still fundamental disagreement between lawmakers about whether a border wall is a good use of funds, to begin with.

Katie Waldman, a spokesman for the DHS, told CNN that the border wall would, in fact, be an effective strategy to deal with illegal immigration. "Walls have proven to be extremely effective at deterring illegal entries and the smuggling of illicit drugs into the United States," she said.

Others have argued that a wall won't be effective whatsoever in solving the illegal immigration issues plaguing America today, and that smugglers and undocumented immigrants have historically been able to move through similar obstacles to get into foreign countries.

Still another opinion comes from Jason Johnson of The Washington Post, who argued in June that the creation of a wall is a sign of a "failing society," regardless of whether it helps the immigration problem, specifically. Johnson wrote,

Rather than solving our problems by trying to keep immigrants (and foreign goods) out, President Trump should work with Congress to develop a humane immigration policy that prevents the separation of families and offers a real solution to beneficiaries of Deferred Action for Childhood Arrivals program. This policy should also recognize the vital role immigrants play in the U.S. economy. In my home state of Texas, for example, 1 in 6 residents are immigrants. Were those Texans to disappear overnight, the state would all but cease to function.