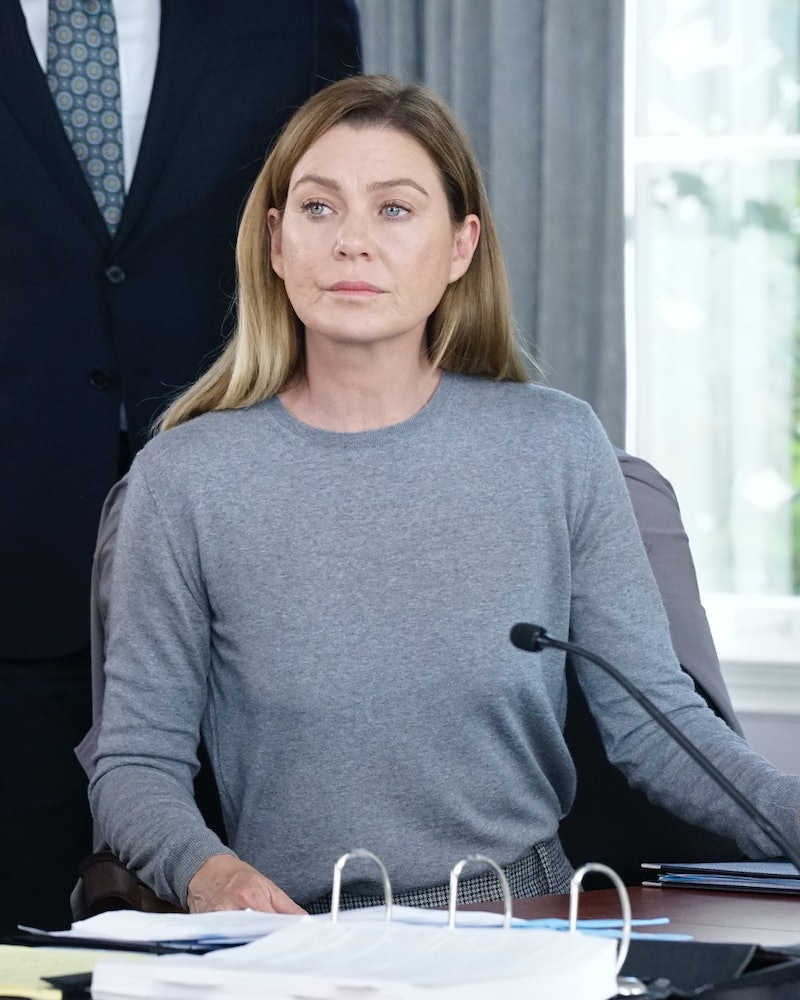 Life has never been easy at Grey Sloan Memorial, but a recent theory about Meredith's cellmate on Grey's Anatomy hints that a dark storyline is brewing unlike anything fans have seen on this show before. Last week's episode, titled "Whistlin' Past the Graveyard" saw Meredith spend some time locked in jail — and while she initially didn't get along very well with her cellmate, the two of them became relatively friendly by the time Mer was sent home.

While assembling a puzzle together, Meredith mentioned that she was a doctor and recounted the story of how she wound up in prison in the first place. It was then that her cellmate, Paula, opened up about her own tragic tale which involved being separated from her kids. This prompted Meredith to post her cellmate's bail in yet another act of kindness. However, despite the seemingly happy outcome of that storyline, some viewers believe that Meredith's generosity could end up coming with dangerous consequences.

Reddit user 51kmg365 recently theorized that Meredith's former cellmate may not be the nice person she's made herself out to be, and could prove to have sociopathic tendencies. "I’m betting Mer’s decision to post bail for her cellmate is going to come back to haunt her," the user wrote. "The way that scene was shot when she was being released gave me an eerie feeling and I was skeptical of her story to begin with." Redditor 51kmg365 added that the character only started confiding in Meredith after learning that she was a doctor who has a soft spot for those in need.

If that's true, then it's possible that the woman completely fabricated her story in the hopes that Mer would take pity on her, mother-to-mother. And while the prediction may seem a little wild even by Grey's Anatomy standards, several fans seem to agree with the theory, believing that the woman may not be who she says she is. This, in large part, is due to the abrupt way the episode ended. The happy music that was playing prior to the final scene just stopped, which could be a hint that Meredith's good deed won't go unpunished.

It's definitely a dark way to perceive such a thoughtful act, though it would help to explain why this seemingly random storyline was introduced out of the blue like this. Meredith already has a lot on her plate this season, what with her medical career being in jeopardy and a potential prison sentence looming on the horizon if she continues to miss her community service hours. Why have her post bail for her cellmate on top of everything else unless it's going to lead to a bigger plot twist down the road?

Maybe Paula will go on to make a positive contribution to Meredith's world in the future. But given that this is Grey's we're talking about, a darker outcome is just as (if not more) likely. And Mer's decision may end up costing her a lot more than just bail money.

More like this
'The Queen’s Gambit' Season 2 Tweet Wasn’t From Anya Taylor-Joy
By Mary Kate McGrath, Jack Irvin and Grace Wehniainen
Netflix Shut Down 'Bridgerton' S3 Rumours About A “Very Dark” Storyline
By Bustle
Shonda Rhimes Responded To The Surprise Exit Of A Day 1 'Grey's Anatomy' Figure
By Grace Wehniainen
'Happy Valley' Recreated This Moment From S1 In Its Penultimate Episode
By Sophie McEvoy
Get Even More From Bustle — Sign Up For The Newsletter
From hair trends to relationship advice, our daily newsletter has everything you need to sound like a person who’s on TikTok, even if you aren’t.