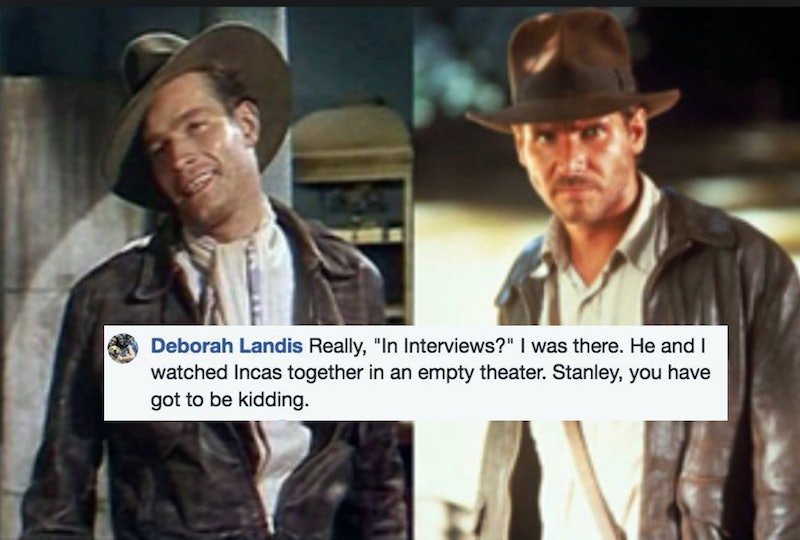 Mansplaining is perhaps the world’s most cringeworthy form of expression. If you need evidence of that, look no further than this guy who tried to mansplain Indiana Jones’s costume to the costume designer herself. If it weren’t so awful, the succinctness of the whole debacle would almost be beautiful, at least karmically speaking.

Yesterday, screenwriter Max Landis (@uptomyknees on Twitter) tweeted a photo of the Facebook comments section below a clip from Jeopardy! someone had posted. The Jeopardy! question on the screen reads, “Charlton Heston’s wardrobe in 1954’s “Secret of the Incas” inspired the clothes worn by this adventurous character 27 years later.” The answer is Indiana Jones. (Excuse me, “Who is Indiana Jones?)

One Facebook commenter, however, was not satisfied by that answer. “The Jeopardy question is wrong,” the commenter writes. “The movie is The Greatest Show On Earth.” Landis’ mother, Deborah Landis, responded to the commenter writing, “No. The question was exactly right because I provided it.”

You see, Deborah Landis was the actual costume designer for Indiana Jones. So, it’s pretty safe to assume that she knows the answer to a question about the costumes for the movie. “Raiders of the Lost Ark is almost frame for frame Secret of the Incas,” Ms. Landis continued in her comment. “Heston later wore the same gear in Greatest Show. But his adventurer/treasure seeker cane [sic] first.”

If you think that’s where the conversation ended, you’ve grossly underestimated the relentless nature of mansplaining. The commenter continued to refute Ms. Landis’s response in yet another comment. “Greatest Show came out in 1952,” he wrote. “Incas came out in 1954. Spielberg acknowledges he was inspired by Greatest Show in numerous in [sic] interviews.” Ms Landis was having absolutely none of it.

“Really, ‘in interviews?’” she wrote. “I was there. He and I watched Incas together. Stanley, you have got to be kidding.” Get out of here with that mansplaining nonsense, Stanley. Ms. Landis is most certainly not here for it.

Max Landis also tweeted a photo of a side-by-side comparison of the costume Heston wore and the one Harrison Ford wore as Indiana Jones. Just in case you needed a visual representation of what Deborah Landis already confirmed.

The internet seems to be, by and large, Team Deborah. Max’s initial tweet has been shared over 24,000 times and has over 90,000 likes. If you want to feel good today, peruse the responses to Max’s tweet for people serving additional tea to Stanley and saying how wonderful Deborah is.

This, of course, is not the first time someone has tried to mansplain a woman’s job to her. A few months ago, a male panel host interrupted a female physicist to the point of an audience member yelling, “Let her speak, please!” Jim Holt, the panel host, has since apologized to Veronika Hubeny, the physicist and only female on the panel about cosmology. If you haven’t yet had your fill of all things cringeworthy, you could also watch this guy mansplain comedy to a female standup comedian. In case there was any question about the guy’s stance, he literally says the words “Men are usually funnier” to her. If you felt a jolt in the earth, that was just me aggressively rolling my eyes.

The list of things men continue to mansplain to women doesn’t stop at jobs. It’s everything from why we should or shouldn’t like something to our personal relationships to feminism. I literally had a guy to tell me what Midol does once. To quote a great philosopher of our time, “Stanley, you have got to be kidding.”