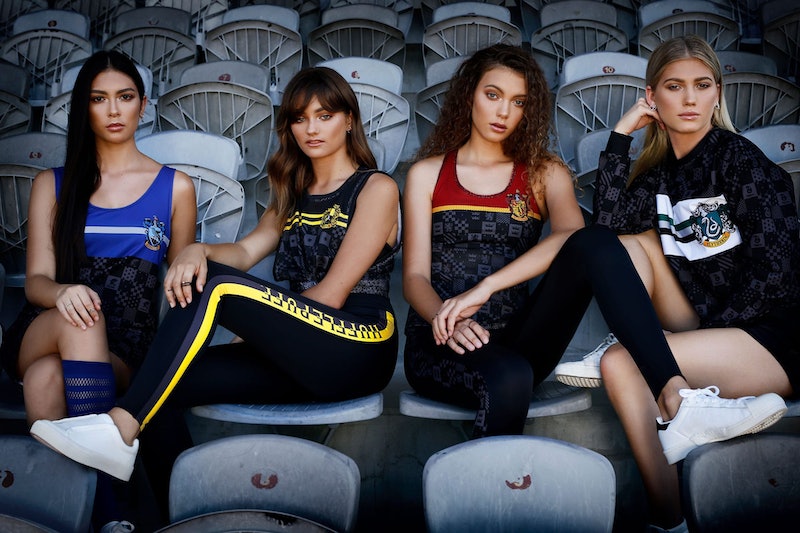 Following up on the success of its first line of Harry Potter-themed attire, Australian designer BlackMilk Clothing has Harry Potter activewear for your next Quidditch tryout. The Brisbane-based company released a lookbook for its new "Team Hogwarts" line, and I have pictures of all the awesome pieces that you can wish for below.

"Team Hogwarts" features tees, tanks, sweatshirts, leggings, and dresses, all started at the low, low price of approximately $53.65 U.S. dollars. Each of the four Hogwarts houses has a complete set of these items available, so you won't have to worry about being able to find that ~perfect~ Slytherin dress for next year's Yule Ball.

BlackMilk's first Harry Potter line debuted this summer to predictably rave reviews, and many of those pieces are still available on the clothier's website. The company "has a licensing partnership with Warner Bros.," according to The Daily Mail, and has released Lord of the Rings and Batman merchandise since opening in 2009. At the time of this writing, BlackMilk Clothing has lines based on Labyrinth, DC Comics, and Marvel Comics available for purchase in its online-only store.

Because this is everyone's first question when they see a new dress: No, it does not look like any of BlackMilk's new Harry Potter dresses have pockets. But their leggings do! Wand pockets, at that.

Check out the awesome items available in BlackMilk Clothing's new line of Harry Potter activewear below, and share your favorite items with me on Twitter!