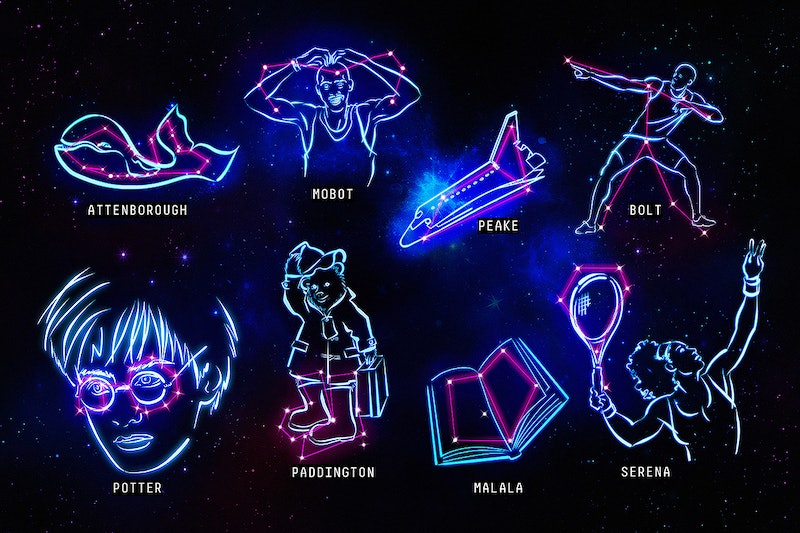 Worried that the old Greek and Roman constellations were unable to get children excited about the stars, scientists in the University of Birmingham Astronomical Society have developed new constellations named for Harry Potter, Malala Yousafzai, Paddington Bear, and others. The "Look Up To The Stars" project is sure to have kids of all ages looking up into the night sky in search of these new constellations.

Look Up To The Stars is part of The Big Bang Fair, which will take place in Birmingham on Mar. 14-17. According to a University of Birmingham press release, a study conducted by The Big Bang Fair found that "72% of the 7-19 year-olds that were polled said they have never looked up at the night sky to find a constellation, while 29% admitted they wouldn't be able to recognise a single classical constellation by name if shown them." As a mythology nerd, that makes me terribly sad.

The good news, of course, is that the intrepid folks of the University of Birmingham Astronomical Society came up with eight new constellations using stars from existing, named clusters. They are:

The Big Bang Fair has published a list of all eight new constellations, with recommendations for when and where to look up into the night sky if you want to see them. A few will be easy to find for avid stargazers, because they use commonly known, named stars. Bolt contains Orionis, the brightest star of the Orion constellation, and Malala uses Polaris, the North Star, as one corner of its book.

Two names familiar to Harry Potter fans also make appearances in the new constellations, though not in the one named for Harry Potter. Instead, you can find Bellatrix in Paddington and Regulus in Peake. Potter does contain one famous star, Izar, which is mentioned in Star Trek, according to The Big Bang Fair.

Look Up To The Stars hopes to inspire kids to get involved in STEM fields, so be sure to take the kids in your life out tonight and find all these new constellations up in the sky.

More like this
16 Novels That Paint A Realistic Portrait Of Abortion
By K.W. Colyard
Everything You Need To Know About The 'Knives Out' Sequel
By Grace Wehniainen
At 14, Jenny Han Wrote Rom-Coms About Her Friends & Fan Mail To Leo DiCaprio
By Alyssa Lapid
Everything To Know About 'Scream 6'
By Jack Irvin and Jake Viswanath
Get Even More From Bustle — Sign Up For The Newsletter