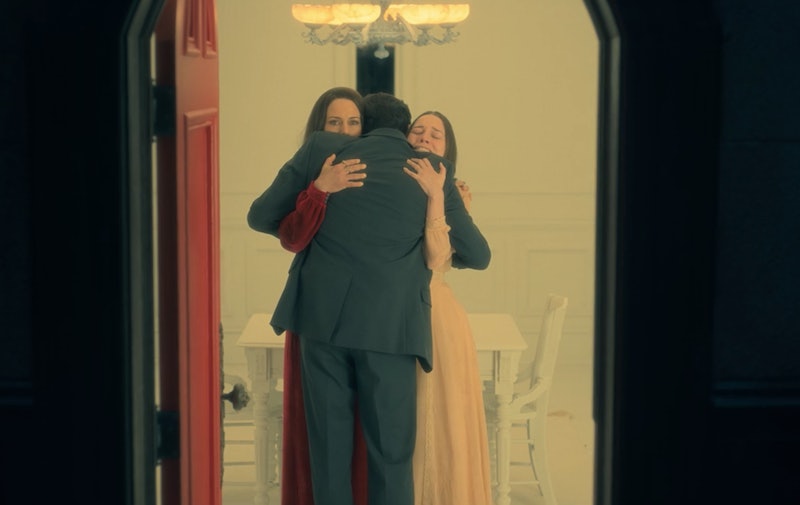 Netflix's newest hit, The Haunting of Hill House, revolves around a haunted house, lifelong trauma, and a red room. The haunting and heartbreaking story has enthralled audiences so much that theories keep popping up about everything, from hidden ghost backstories to what the end really means. Well, for those that love conspiracy theories, you're going to need to take a step back, because a Haunting of Hill House theory about the red room was just debunked by creator, Mike Flanagan.

In a recent interview with TVLine, Flanagan — the creator, director, and co-executive producer of Hill House — said that while he appreciates the excitement behind the fan theories, there's no need for them. Specifically, he explained, there's no hidden meaning in the final few minutes of the series. “I’ve said a lot about the ending, and I’m reluctant to say more," he said. "I like that people are able to put their own spin on things, so I’m not eager to take that away from them... In this case, though, the ending can be read at face value.” In other words, what you see is what you get. The remaining Crain family is actually fine (so he says).

The theories behind The Haunting of Hill House's ending are endless and while some are kind of out there, others aren't so crazy. In the weeks following The Haunting of Hill House's release, there's one theory in particular that seemed awfully convincing, especially since it came straight from the cast. Oliver Jackson-Cohen, who plays adult Luke, theorized that the Crain siblings never really got their happy ending, as the episode seems to suggest. He explained to The Wrap that every sibling's fantasy shown by the Red Room featured a red prop or costume piece (like Luke's red converse). And then in the last scene, while celebrating Luke's 2 years of sobriety, the surviving siblings were eating a red cake, suggesting they were never saved from the house and were still stuck in the Red Room. It's almost too genius not to be true. However, Flanagan wanted to deflate that theory too.

“If they’re still in the Red Room, it robs Hugh’s sacrifice (and the show itself) of any meaning,” he said. “For me, it ends exactly as it appears to.” If they're all actually dead or the ending was all an illusion and no time has passed at all, leaving them still trapped in Hill House, then what Hugh did, staying behind so that his children would be allowed to leave, was for nothing. His beloved children would still be suffering despite it all (unless that was part of the illusion too, but that's getting a little too conspiracy-theory-crazy).

Speaking of the ending, Flanagan also added that, lest fans get confused, The Haunting of Hill House does not have a happy or uplifting ending. “Hugh is dead, Nell is dead, Olivia is still dead,” he told TVLine.

“I always looked at it as just having a hint of peace, just a glimpse into the fact that life goes on, and there’s some acceptance for the surviving characters... Acceptance, peace and a little forgiveness doesn’t lessen the loss they experience in that episode; it only shows that life has a way of going on, and that these characters are finally accepting of that.”

For a show that delved into the topics of trauma and grief, it truly is the best ending to show how they conquered through it all and moved forward with their lives.