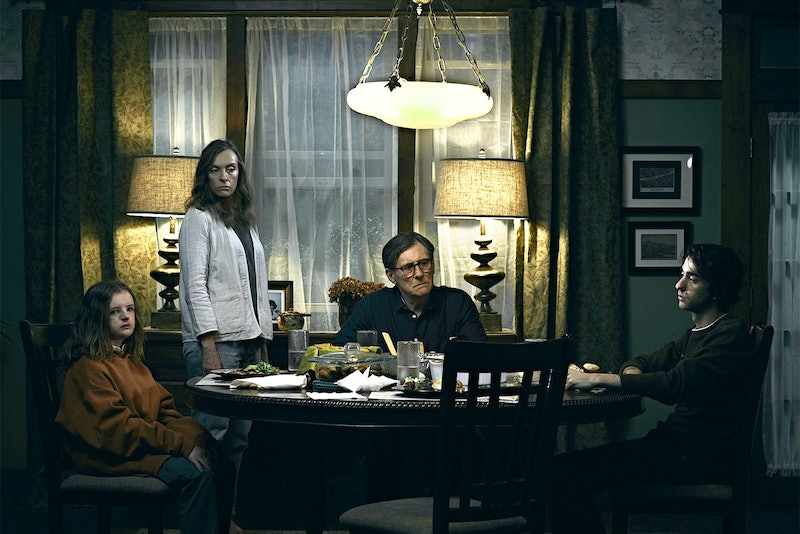 The new horror film Hereditary has already been hailed as this generation's The Exorcist, a benchmark so impressive that audiences are coming up with the highest of expectations. For those only familiar with the parodies and general idea of The Exorcist, what makes it and Hereditary truly frightening aren't their supernatural scares, but their natural settings — the realistic family dynamics at the heart of both films grounding them in reality before shattering the familiar world before our eyes. In the exclusive clip from Hereditary below, you might not even realize you're watching a horror film; the frustration and anger expressed by star Toni Collette wouldn't be out of place in a straightforward family drama or generational grapple.

The film follows the Graham family in the wake of their reclusive maternal grandmother Ellen's death. Ellen's daughter Annie (Colette), seen in the clip, had what could charitably be called a tense relationship with her mother. The two were estranged for years, and now, with Ellen's death, Annie has to confront not only their relationship, but the horrifying idea that Ellen's sick mentality may have passed on to Annie and her family.

Annie's children, older son Peter (Alex Wolff) and daughter Charlie (Milly Shapiro), had wildly different relationships with their grandmother; younger Charlie was grandma's clear favorite, while Annie actively kept her son away from her mother to avoid Ellen's manipulations. Husband and father Steve (Gabriel Byrne), meanwhile, tries to mediate as best he can, but watches mostly helpless as his family deals with Ellen's death in increasingly destructive ways.

Ellen's descendants slowly realize there's something more sinister at work than grief and mourning — something, as the title implies, that's familial destiny. But even with terrifying elements edging in from Hereditary's corners, the heart of the film, and what makes it so unsettling, is how easily relatable the flawed relationships at the heart of the film are. For anyone who's had a toxic relationship with a parent or relative, the film will be a frightening mirror even without the darker implications, that even inadvertently children mirror family behavior and dynamics in ways they might not even realize.

Annie's job is building detailed miniatures of spaces real and imagined, and the film often zooms into what seems to be a model only to populate it with actual characters in a scene, or zooms out from a scene only to reveal it to be a miniature in progress. Hereditary blurs the line between the models and reality of the film in the same way it blurs the idea of everyday relationships with eerie unreality; the two are separated by the thinnest of margins. When Peter starts seeing ghosts, how much of it is truly otherworldly and how much is a manifestation of his isolation and grief? Which even comes first?

The exclusive clip shows Annie attending a grief counseling session, barely able to articulate her feelings of guilt and anger. Her mother is dead and yet still able to dominate Annie's life; there doesn't need to be a murderous ghost for that idea to be equally upsetting and disturbingly familiar. Even those who've been in toxic relationships without the fraught family element know the mixed intensity of relief and sadness, pain and guilt at any joy it's over.

Most horror movies attempt to scare their audiences by presenting on-screen avatars, characters the audience can see themselves in, and then threatening the audience by threatening them. Many times the relationship is surface-deep — teenagers in '80s slashers, a lone woman running and afraid — and it's easy to laugh off their choices, their outfits, and their actions.

Hereditary doesn't give audiences that easy out, though. By presenting a flawed family trying to work through emotional issues we can all easily relate to, the movie makes viewers as invested in the characters' well-beings as much as they are in their own. And when things take a sinister turn, audiences are dragged into a much darker and more frightening place than they ever expected.