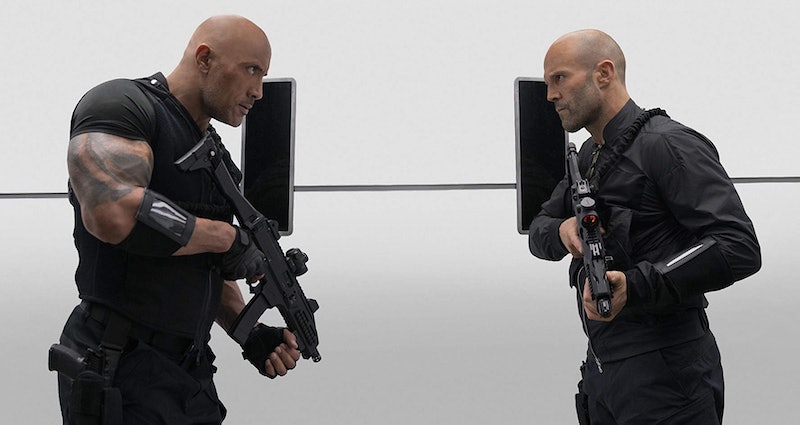 Spoilers ahead! As a part of the Fast & Furious universe, Hobbs & Shaw is a star-studded affair that features Dwayne "The Rock" Johnson and Jason Statham reprising their respective roles as lawman Luke Hobbs and former villain Deckard Shaw, plus some major new characters. Vanessa Kirby plays Shaw's sister and MI6 agent Hattie, and Idris Elba is the villain of the piece — super soldier Brixton Lore. There are also some pretty significant cameos in Hobbs & Shaw, including Kevin Hart, who has a couple of funny scenes as an air marshal.

It's not too surprising to see him, considering the comedian's friendship with Johnson. They worked together on 2017's Jumanji: Welcome to the Jungle and will both be back in the upcoming sequel, The Next Level. They seemed to have a blast on the movie's press tour and are basically pros at roasting each other.

In Hobbs & Shaw, Hart plays US Air Marshal Dinkley. And although he doesn't share much screen time with either Johnson or Statham, his character ultimately becomes instrumental to the success of their mission.

Dinkley is sitting in front of Hobbs and both Shaw siblings on a commercial flight to Moscow and overhears the two bickering about the mission at hand, which is to extract a dangerous virus from Hattie before Brixton and the company he works for, Eteon, use it to wipe out the majority of the human race. The two are in the middle of debating the necessity of Hobbs's involvement when Dinkley suddenly interjects, introduces himself, complains about the mundane life of an air marshal, and offers that he could be a useful addition to their team.

And though Hobbs and Shaw dismiss Dinkley at first, he proves to be right about that. The air marshal winds up assisting the trio by securing a last-minute flight to escape to Hobbs's home country of Samoa. Hobbs and Shaw thank Dinkley with a phone call (which takes place while the air marshal is on the toilet), but when he gets too chatty and once more suggests that he join the two on more missions, Shaw gets annoyed and throws Hobbs's phone out the car window.

That phone call is the last we see of Hart in the film, but there's a chance he might have a bigger part to play in any possible upcoming sequel to the spinoff. After all, he and Johnson have a tried and tested comic chemistry, which — as seen in the film — also jives well with Statham and Johnson's dynamic. And who knows, Dinkley's persistence might just land him a bigger role in the next movie, which they could very well call Hobbs, Shaw & Dinkley.

But a second Hobbs & Shaw movie has yet to be confirmed by filmmakers, though the multiple mid and post-credits scenes in the film seem to suggest that we'll be seeing the unlikely duo do more jobs together. This partnership and Hart's character are now part of the Fast cinematic universe at large, so who knows? We might just see them all together again in the upcoming Fast & Furious 9.