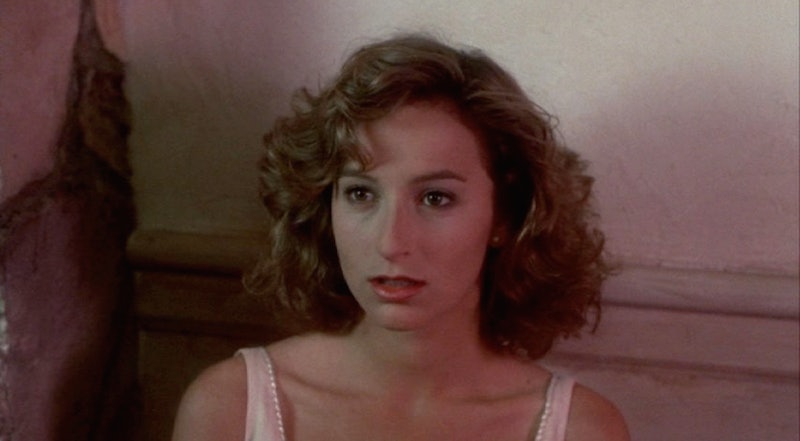 Many iconic moments in Dirty Dancing have contributed to the film's enduring legacy: "I carried a watermelon," crawling on the floor to "Love Is Strange," the lift. But the moment that has stood out beyond all the rest is Johnny's line, "Nobody puts Baby in the corner." (Sometimes written as, "Nobody puts Baby in a corner.) It was ranked number 98 on AFI'S 100 Greatest Movie Quotes of All Time. Though the film is only 30 years old, the Dirty Dancing quote has the classic appeal that "Frankly, my dear, I don't give a damn," and, "Here's looking at you, kid," also carry. And while many know of the quote, the line often serves as a personal mantra for fans. But what is it about "Nobody puts Baby in the corner" that makes it just as impactful now as when Dirty Dancing was released? The 30-year anniversary demanded that the quote be taken out of the corner, dusted off, and given the attention it deserves.

The line leading up to the big, final dance in Dirty Dancing has solidified its place in pop culture by being referred to in a wide array of TV shows, including Gilmore Girls (made all the more epic considering Emily Gilmore actress Kelly Bishop played Baby's mom), The O.C., Weeds, Community, Supernatural, RuPaul's Drag Race, and Designated Survivor. Seth Rogen spoofs it in This Is The End. A Fall Out Boy song and an episode of Veronica Mars were named in honor of it. But is "Nobody puts Baby in the corner" an empowering statement? Another example of the damaging stereotype that a man must speak up for a woman? Or just a damn good line that Patrick Swayze delivered with enough assertive charisma that you can't help but quote it? (Yes, no, and hell yes — though it's more than just Swayze's charm that makes the line work after all these years.)

In the plethora of thinkpieces that have been written by people whose formative years were spent watching the film, Dirty Dancing is often lauded as "liberal," "subversive," and "sex positive," and was even called a "feminist masterpiece." And while you can find flaws with the movie, the story of Baby, who offers to learn a dance so that Penny can get an abortion, is all of those things. But it's also a love story that highlights how you can simultaneously want to change the world while desiring to look as good as Penny on the dance floor with Swayze's Johnny Castle by your side.

After Frances "Baby" Houseman saves the day multiple times by providing the money for Penny's abortion, learning the mambo to cover for the dancer, and getting her father to care for Penny after the abortion ends up not being performed by a legitimate doctor, Johnny sees Baby as the fearless young woman that she is. She instigates their sexual relationship and when Johnny is blamed for stealing, she admits he couldn't have done it because she had spent the night with him, even though she knows it will severely disappoint her father.

When Johnny returns to Kellerman's to do the final dance of the season his way with Baby, he stands up to her father by pulling her away from that damn corner. But the story goes that Swayze didn't want to say the line. The writer of Dirty Dancing, Eleanor Bergstein, told The Huffington Post for a 2017 article that, "I don't think anybody thought it was too great a line." Her words support the legend that Swayze didn't like it, saying, "Patrick didn't want to say it, but I just said, 'Well, just say it once and then the next time, just go up and do the speech and maybe we won't use it.' But we decided to use it."

In his memoir, The Time Of My Life, written by him and his wife Lisa Niemi, Swayze confirmed that he didn't want to say the line, as The Daily Mail reported. However, he was able to admit it worked in the film and even used it himself later in life to describe his fight against cancer. "We did a lot of rewriting for the big final scene, but one line that I hated stayed in. I could hardly bring myself to say: 'Nobody puts Baby in a corner.' It sounded so corny," Swayze wrote in the book. "But, seeing the finished film, I had to admit it worked. And of course it became one of the most quoted lines in the movie. I quote a version of it myself these days, saying, 'Nobody puts Patrick's pancreas in a corner,' when people ask how I'm coping with cancer."

Swayze lost his battle with cancer in 2009, but the actor used the famous line with humor, in order to show his unrelenting spirit after being diagnosed with terminal cancer. And this is a testament to the quote's power.

Another interesting anecdote that highlights the strength of the line is how it ended up being translated into German. In order to make Swayze's mouth match what was being said in German, Bergstein told The Huffington Post that "Nobody puts Baby in the corner" was changed to, "My baby belongs to me, this is clear" in Germany.

"I said, 'Oh, my God, I'm going to be thrown out of feminist heaven, what is this?!' But it turns out that there was as huge and explosive reaction to that line in Germany, as iconic a line as 'Nobody puts Baby in the corner,'" Bergstein said. (Bergstein's story also confirms that despite what it sounds like Swayze is saying, the line was written to be "the corner.") "That actually delights me because that means that it's [about] the place in the story rather than the line itself, and I was always afraid that line was going to end up on my tombstone," she said. The line could still end up on her tombstone, but there are far worse things to be remembered for than the love between Johnny and Baby.

These two accounts from people who were essential in making the movie are extreme examples of the two meanings that "Nobody puts Baby in the corner" has for people. For some, it's an emboldened statement where they replace the name "baby" with their own names and use it as a demand for respect and to show that they will not be underestimated, overlooked, or ignored. For others, it's a romantic, sweep-you-off-your-feet line that's about someone seeing you for who you really are.

But to Bergstein's point, perhaps Swayze could have said anything in that moment before he whisked Baby onto the stage and it still would have caused generations of humans to collectively swoon. But the original quote works on so many levels beyond what's occurring in the narrative. Yes, Baby is literally sitting in the corner, but it's the deeper meaning behind it that makes the quip electrifying. Johnny is saying that Baby doesn't deserve to be shoved aside or silenced — she's a star. And, in case the Housemans needed evidence, Baby then shows what a great performer she is in the climatic final dance.

But Johnny wasn't just talking about Baby's quick ability to learn a dance routine, which — let's face it — probably wasn't that impressive to a professional like Johnny Castle. He was talking about the type of person Baby is. A woman who protects another woman's right to choose and calls out the man who impregnated her for not taking responsibility. A woman who risks her own reputation to defend someone else's honor. A woman who admits when she is wrong. A woman who sees inequality between classes and calls it out for what it is. Baby was a social warrior, who actually backed her beliefs up with actions. And no one like that should ever be relegated to sit in the corner.

Perhaps the quote in its original context is not 100 percent empowering for women since Johnny was the one to say it. Sure, it would be much more of a feminist moment if Jennifer Grey's character stood up and said, "Nobody puts me in the corner." However, it's still extremely powerful in the fact that it comes from someone else seeing the bravery and goodness inside of Baby. After she had to speak up to defend Johnny, he returned the sentiment by standing up for her in front of her father. And in return, Johnny actually earned respect from Dr. Jake Houseman for doing so.

In this way, "Nobody puts Baby in the corner," is both one of the most empowering and romantic quotes of all time. Just like the movie it is featured in, it highlights that being true to yourself and being in love don't have to be mutually exclusive — and that people and love don't have to back down in the face of adversity. So whether you use the quote to define your personal attitude or want someone to say the quote to you, "Nobody puts Baby in the corner" is a reminder that standing up for what is right is timeless, courageous, and sometimes — like in the case of Dirty Dancing — extremely romantic.