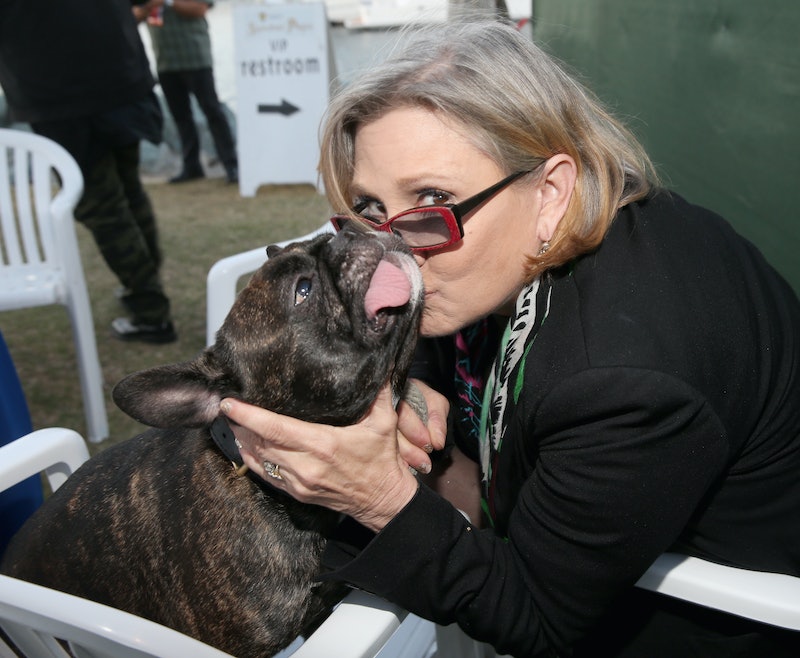 "Never go with a hippie to a second location." It's one of the absolute best lines in NBC's 30 Rock, a show that delighted in one-liners. It's absurd, but somehow retains an air of sensibility, through it's no-nonsense assertiveness of Alec Baldwin's Jack Donaghy. In 2009, Tina Fey declared it among 30 Rock's top 10 lines to The Daily Beast.

The hippie in question, of course, was one of that show's absolute best cameos, the wonderful Carrie Fisher, who died Tuesday at age 60, playing Rosemary Howard, a pioneering female comedy writer who Fey's Liz Lemon had idolized as a child. She inspires Liz with her tales of the boundary-pushing work she and other writers had written with devil-may-care attitudes in the 70s, making Liz wonder if she's become too much of a follower, putting career above her creativity and values.

Liz ends up quitting her job and following Rosemary to her apartment, which she soon discovers is awful. She's not sure it has a bathroom, and the F train runs right by the window ("Don't even think about jumping for that train," says Rosemary). The woman Liz had idolized turns out to be a sad alcoholic who never got her life together, and Liz flees, allowing Fisher to send her off with a classic bit of 30 Rock meta-commentary:

The whole character is full of this kind of meta-comedy. Liz is a consistent Star Wars geek (even dressing up as Fisher's Princess Leia for her wedding), and her first meeting with the star, at a book signing, plays on the interaction Fisher undoubtably has had with crazed fans before. Liz opens with, "I don't want to sound like a weirdo fan, but I am obsessed with everything you've ever done," before launching into embarrassing stories of her youth, to which Rosemary deadpans, "You're going to kill me, aren't you?"

But beyond that, Rosemary is imbued with the best of the Carrie Fisher we know and love — a legend of the 70s that did too much cocaine, wrote some impressive stuff about it, and lived out to be the kind of kooky middle aged woman we all wish we could be. She alternates between tough and warm, intelligent and unhinged.

For Liz Lemon, she represents an important moment. The core challenge for Liz in 30 Rock is balancing her liberal creative streak as a comedy writer with a more conservative safe path represented by Baldwin's Jack Donaghy. She is torn between wanting to be an outsider, a radical, a weirdo, and wanting the security (and money) that comes with respectability. For seven seasons, Liz waffled between the two positions, wanting to be herself, but worried she'll turn out just like Rosemary. At the end of the episode, she goes to Jack and asks him to teach her how to do "that thing that rich people do where they turn money into more money."

But Carrie Fisher managed to prove, that sometimes, you can have it all. She made tons of money in the most profitable movie franchise of all time, and she did it while having fun and banging Harrison Ford. She came back for the reboot and the paycheck, and gave some of the most off-the-wall hilarious interviews anyone ever has while she worked for Disney, the corporate behemoth. Rosemary may have showed Liz Lemon that she needs to make compromises, but Carrie Fisher proves to us all, that maybe, if we're lucky, we don't.