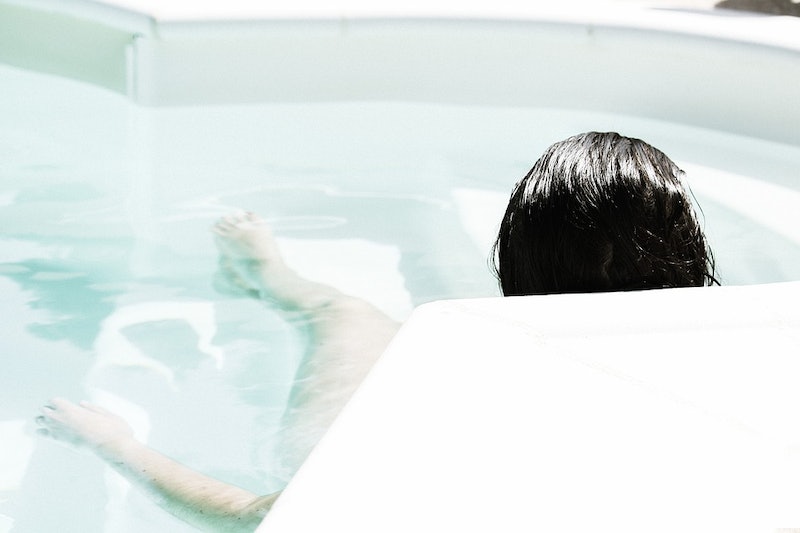 When the temperatures outside are on the rise, fitness goals tend to melt away. It's not that we're lazy — it's just too darn hot! Luckily, a new study might have found the cure for summer sluggishness. Research shows if you take a hot bath after you exercise you can improve your physical performance in warm weather. As if we needed one more reason to treat ourselves to a lavender-scented soak!

For the study, published last month in the Journal of Strength & Conditioning Research, nine amateur runners completed 5K runs in brutal 90-degree temperatures on four occasions, each time prepping for the run in a different way. Before the first of the treadmill time trials, the eight men and one woman didn't prep for the hot temperatures at all, resulting in a run that was later found to be their slowest time. On a following occasion they precooled their bodies by plunging their arms into buckets of cold water while donning cooling vests and undergarments fitted with ice packs for 20 minutes. Another time, in what seems like sheer torture, the researchers acclimated the runners to the heat by having them bike for 90 minute periods in 99-degrees lab conditions over the course of four consecutive days before they repeated the 5K run. For the final run, they combined both heat acclamation and cooling techniques.

The researchers, from the UK and Malaysia, found that the marathoners ran significantly faster after the precooling protocol than with no temperature prep, improving their time by four percent. A review of past precooling research found that reducing body temperature prior to exercise via cooling packs and vests, cold drinks, water application, and good old fashioned air conditioning can have a beneficial effect on runners' performance. Some Olympians even use these techniques to improve their times when competing in hot weather. Surprisingly, however, their runners' chilly time wasn't the one to beat. Four days on those sweltering bikes paid off, as the heat acclimation prep showed the most significant change, dropping the participant's treadmill race times by a whopping 6.5 percent, though combining the precooling with the heat acclimation made no further improvements.

These results suggest that heat acclamation can be far more helpful for athletes' performance than precooling, though, as the New York Times points out, sometimes pre-race conditions do not allow for a prolonged periods of well planned heat acclamation. In these cases, the cooling vest and frozen underwear is recommended as a handy "stopgap."

Those looking to improve their aerobic workouts this summer can train outside to slowly acclimate your body to the summer heat — or a bath might have a similar effect. Carl James, the study's first author and physiologist at the National Institute of Sport in Malaysia, suggests that athletes looking to desensitize themselves to heat should run a very hot bath, about 104 degrees Fahrenheit (as hot as a hot tub, for reference), and soak for 30 minutes after each half hour-long run.

What's more, the bath does double duty, helping to adjust your temperature while soothing those achey muscles. Sounds almost too good to be true!