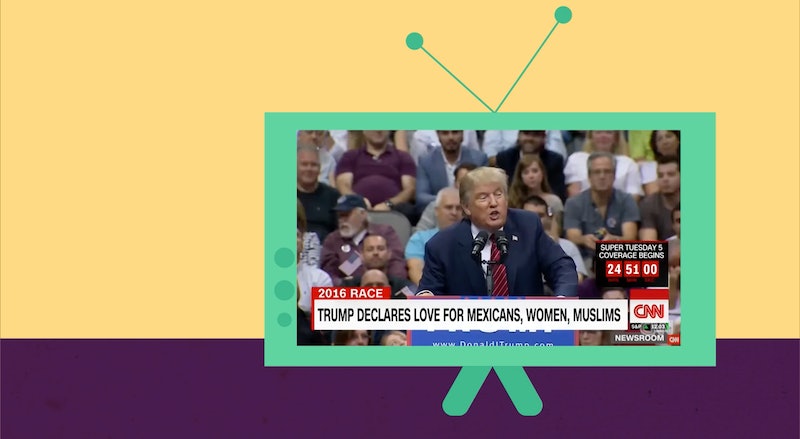 Back in January, following Donald Trump's inauguration, millions of women around the world marched in solidarity to stand up for their rights. They did so with good reason. Just 100 days in, Trump's presidency has already hurt women, both in the United States and around the world. Bustle took a closer look at how Trump is impacting millennial women everywhere, producing a short video exploring how a 22-year-old millennial woman in six different countries would potentially be affected by his regressive policies.

Most recently within the borders of the United States, the American Health Care Act has left women — and men — infuriated. Under the bill, both pregnancy and sexual assault could be considered pre-existing conditions, making women especially vulnerable to hiked-up health insurance premiums. On top top that, Planned Parenthood could lose funding and birth control would no longer be covered.

Though these potential changes to the health care system would most definitely affect American millennial women, the bill's policies are just the cusp of Trump's true impact on women both in the United States and around the world. This video highlights how profoundly Trump's presidency can (and will) negatively impact women in vastly different parts of the globe. From the global gag order and the defunding of Planned Parenthood to immigration reform, pollution, and a xenophobic attitude towards refugees, Trump's presidency will be felt by women in numerous corners of the world.

Here is an explanation of what a millennial woman from each of the six nations listed in the video could face as a result of Trump's presidency:

The video starts off in America in the state of Mississippi, where women already face an uphill battle to attain affordable, quality reproductive health care. The state currently only has one Planned Parenthood clinic. Thus, if a woman needs treatment for an STD, birth control, or other reproductive health services, she could have to drive hours from her home to acquire this care. Moreover, if Trump achieves his objective and defunds Planned Parenthood, this clinic could close, meaning women in Mississippi would have very few options for affordable, accessible reproductive health care.

The video then moves to Venezuela, where women are already experiencing a deadly economic crisis and political unrest under President Nicolás Maduro. Trump's secretary of state, Rex Tillerson, has called for a “negotiated transition to democratic rule” in the country. And while relief is certainly needed for Venezuelans, democratization efforts spearheaded by the United States could potentially cause even more unrest and government crackdowns in the country. This partially due to the United States' complicated relationship with Latin America and Venezuela. This unrest could further threaten women's (and men's) physical and economic security.

The video then shows a woman from nearby Guatemala, who was brought to the United States undocumented as a child but was provided protection from deportation under the Obama administration's Deferred Action for Childhood Arrivals. However, the status of DACA is perpetually in question under Trump, and Immigration and Customs Enforcement has already deported at least one individual with DACA status.

Moving over to Namibia, the video features a pregnant woman visiting her local Namibia Planned Parenthood Association (NPPA). Unfortunately, under Trump's presidency, the global gag order has been reinstated, meaning that NPPA does not receive foreign aid from the United States if it so much as mentions abortion as a family planning option. Thus, under Trump, this Namibian woman's right to full reproductive freedom is completely hampered, as is NPPA's ability to do its job.

Next comes the story of a Bangladeshi woman, who must endure heavily polluted air on a daily basis. According to the World Health Organization, 37,000 Bangladeshi residents die of air pollution-related complications each year. To make matters even worse, Trump, whose company has clothing factories in Bangladesh, contributes to this pollution, and, if his Regulations from the Executive in Need of Scrutiny (REINS) Act is passed into law, his company will likely face little, if any, further environmental regulation. The proposed law mandates that government agencies cannot pass any new environmental regulations unless the costs to America can be balanced out, something which would be exceedingly challenging.

Finally, the video features a Yemeni woman who has faced years of violent civil war in her country. Under Trump's proposed (but currently halted) travel ban, this woman, her friends, and family members would not be eligible to come to the United States as refugees or immigrants from Yemen. And for this woman, waiting to leave the country due to the ban could be deadly, as women are subject to violence and sexual assault in the midst of the war.

Overall, it's clear that the Trump administration's policies have already affected or have the potential to affect millions of women around the world in a variety of different, yet equally harrowing ways — from infringing on their reproductive freedoms to threatening their immigration status and posing risks to their safety, health, and security.

For the sake of all women, it is incredibly important to take action to resist Trump's policies. Consider calling and writing your representatives to advocate on behalf of women. Also, think about donating to Planned Parenthood and other nonprofits that support women's rights and freedoms. Finally, make sure you are registered to vote in the 2018 midterm elections, as making your voice heard is one of the best ways to resist policies that are unjust for women (and men) everywhere.