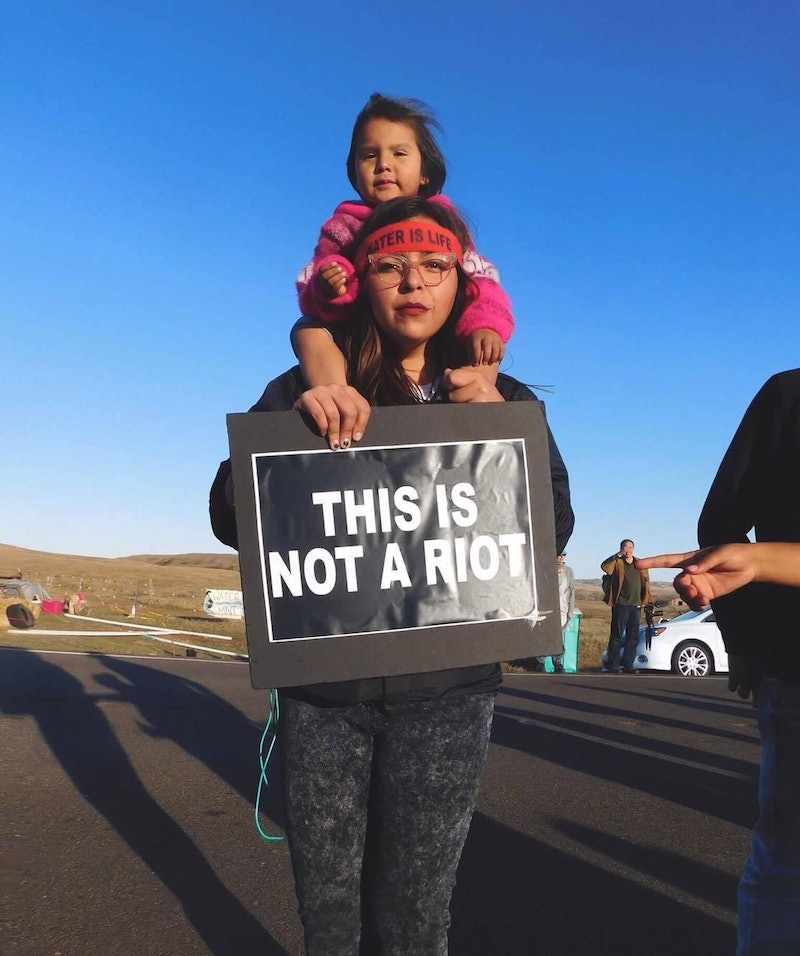 In this op-ed, Eryn Wise, Jicarilla Apache/Laguna Pueblo, sheds light on the sexual abuses that happen in Indigenous communities as a result of extractive industries.

In 2016, I found my feet on the ground in seemingly nowhere North Dakota fighting the Dakota Access Pipeline alongside thousands of Native and non-Native people from across the world. As anyone who witnessed the occupation of Standing Rock can attest, the immensity of the camps and sheer Indian-ness of its occupants demanded an immediate place in history. I stared around in awe and kept imagining Thomas Builds-the-Fire saying to historians years later, “Every Indian in the world was there.”

Though I was amazed at the resurgence of Indigenous resistance before me, I couldn’t stop counting the women. “One, two… three. Had it happened to her? One, two… three.” Over and over, I tallied aunties, grandmas, mamas, daughters, and big sisters like me, gnawing on the undeniable fact that Native women are 2.5 to 3.5 times more likely to experience sexual assault compared to all other races. It was devastating to stare out at the generations of life-givers knowing what we all carry in our blood memory. But soon weeks, and months came to pass and I, alongside all the women I’d obsessively counted upon my arrival, became focused on and accustomed to various attacks from our opposition.

A boom in the oil industry had introduced many small towns to an influx of non-Native male pipeline workers. This caused the ratio of men to women in said communities to change drastically. On average the ratio is around 10 to one, and in some places it can be as high as 20 to one. As Christine Nobiss, also of Seeding Sovereignty, has previously written, the rise of violent crime is directly coincident with the oil boom: “It may not be obvious to non-Native people, but the health and safety of Native American people is directly linked to the health and safety of our land,” she wrote.

During my time on the plains, sexual harassment was standard, but reality reared its ugly head further down the construction route in Iowa, when a pipeline worker catcalled a young Water Protector asking, “How much for the little girl?” When her mother tried to file an affidavit with law enforcement, she claims she was denied, though verbal street harassment is illegal in Iowa. (Dakota Access has not acknowledged this incident nor the increase in violent crime in oil towns.)

What’s more, according to the U.S. Government Accountability Office, U.S. attorneys reportedly declined 50 percent of the Indigenous cases deferred to them between 2005 and 2009, of which 67 percent were sexual abuse and rape related. As Terri Henry, former co-chair of the National Congress of American Indians Task Force on Violence Against Native Women, has said, “The violence we are living is directly connected to abusers walking free without fear of the law, fear of civil liability, or fear of criminal prosecution.”

I have seen the continued desensitization of our collective psyche to sexual assault and harassment. 70 percent of violent victimizations experienced by Indigenous peoples are not committed by persons of the same race, according to the Bureau of Justice Statistics. Attempted suicide has been reported by more than 20 percent of girls surveyed, and that research analysis showed attempts were in part associated with sexual abuse — yet another statistic that reflected my personal life experiences. Our youth are at critical risk for suicide due to the flagrant disregard for Indigenous sovereignty, and desperate need for cultural preservation, and land restoration.

In my work with Seeding Sovereignty, a women-led organization honoring Indigenous sovereignty with a goal of building cross-cultural bridges, I aim to inspire young folks to lift their voices for those who are voiceless, and strive to ground them in traditional teachings based on the multigenerational environmental stewardship gifted to us by our ancestors. Our movement was born on the ground in Standing Rock and seeks to strengthen the voices and leadership of youth carrying the spirit and lessons of resistance to the sacred fires lit in the wake of the #NoDAPL movement.

A catastrophic web has been woven between extractive industries and Native communities, and we are each called upon to observe issues of broader concern. It is evident, now more than ever, that extractive industries are having disproportionate adverse effects on indigenous peoples, particularly on the wellbeing of Native women. The continued desecration of unceded Indigenous territories and sacred resources resulting from extraction projects have contributed to disease, birth defects, reproductive health issues, and delayed early childhood development among community members. More attention needs to be given to Indigenous women living near points of extraction. This is the land we inherited from our ancestors. We are still here, intrepid and Indigenous; and we are moving forward.

More like this
Beyoncé & Madonna’s “Break My Soul” Remix Honors A Group Of Black Icons
By Stephanie Topacio Long
Charlene White & MPs Lead Tributes For Bristol Bus Boycott Organiser Roy Hackett
By Sam Ramsden
25 Things I've Reduced My Life To, In Addition To WFH In My PJs
By Ginny Hogan
The Spiritual Meaning Of The August 2022 New Moon
By Nina Kahn
Get Even More From Bustle — Sign Up For The Newsletter