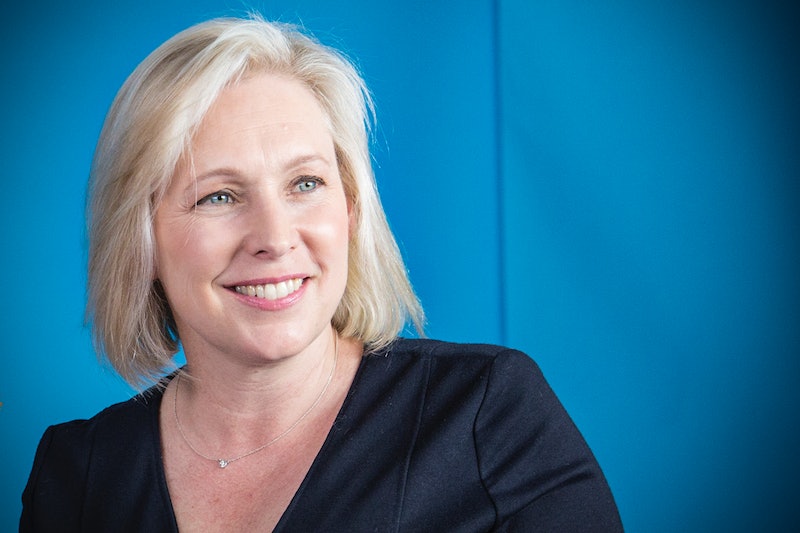 For Sen. Kirsten Gillibrand — who considers former Secretary of State Hillary Clinton to be a mentor — there has been one positive to arise from the ashes of Clinton's presidential loss: The Trump presidency has spurred people from across the country to rally together to speak out on the issues they care about. And that response to Trump's presidency has Gillibrand feeling more inspired than ever.

"The attacks that President Trump has made on women's health, on free speech, on freedom of religion with the Muslim Ban, on issues related to the balance of power and attacking the judiciary — I mean he's really trying to disrupt basic institutions we've taken for granted."

Gillibrand says that since the presidential election, she's noticed increased hype as constituents are calling their representatives, going to protests, posting on social media, and even writing traditional letters. "All of it is working, and it's pushing the senators, particularly who live in perhaps purple states as opposed to red states, to think twice," she explains.

One tipping point was the travel ban, the executive order signed by the president that banned refugees, immigrants, and visitors from seven Muslim-majority countries from entering the U.S. In its aftermath, thousands of people united at airports across the country to advocate on behalf of the vulnerable populations the president wanted to turn away.

"We believe that this country is big enough, great enough, kind enough, welcoming enough to welcome refugees and their families," Gillibrand says, her voice rising. "We're not afraid of refugees, it's not who we are. We're a country founded on immigrants, and so I do think something has broken open and I think that the result of of this is a commitment to being heard that is so important and so powerful."

"It's the only thing that will defeat Trump," she adds.

Going forward, and despite the polarized political climate, Gillibrand says she will continue to do what she does best: finding bipartisan solutions for the real problems affecting New Yorkers. She says she's currently working on a bipartisan bill with Republican Sen. Lindsey Graham of South Carolina to create a commission to assess foreign hacking during the presidential election.

"Women are finally realizing how vital their voices are and how important their worldview is."

Her advice for millennial women who want to follow in her steps and enter the world of politics despite these discouraging challenges is to do it anyway and to do it without fear.

"If you don't do it, the person who does might not care about the thing you care about, so you have to fight for it," she says, pausing for emphasis. "Own your ambition. Don't be afraid."