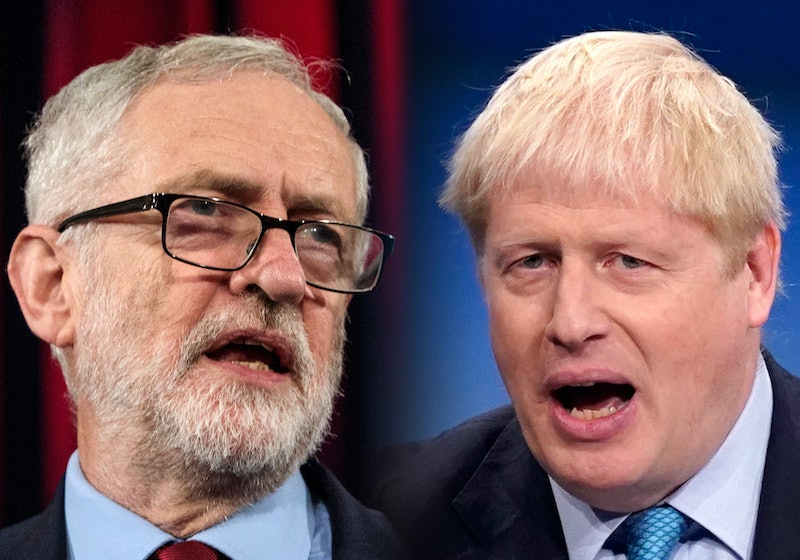 With another general election on the horizon and the nation still in a state of Brexit chaos, who to vote for is puzzling to say the least. But the voting history of the party leaders can reveal a lot about their personal beliefs as well as the campaigns their parties are likely to endorse.

Thankfully, a couple of sites — Public Whip and They Work For You — detail exactly what each MP votes for and against and even the votes they didn't show up for. It's worth noting that some stances have to be taken with a pinch of salt. When a politician joins a party, more often than not, they are told which way to vote. This is known as the party whip.

Of course, it is possible to rebel against the whip. And some politicians do. But the data is unable to state whether MPs were told they could vote freely on a particular issue or whether they should stick with the party's beliefs.

When you're the leader of a party, it's highly unlikely you're going to stray. But the following voting records should still give you an idea of the person and party you're planning to vote for.

Conservative leader and current Prime Minister Boris Johnson usually sticks to the party whip. In fact, most of the times he rebelled against his party involved EU matters (though it's unclear if these were free votes).

In terms of equality and human rights, Johnson has generally voted for equal gay rights. However, he was absent for several votes on the issue and has generally voted against laws to promote human rights and equality. Throughout his career, he has also abstained from all abortion-related votes, according to Where Do They Stand.

In 2015, he voted with his party against assessing the impact of government policies on women and against publishing a gender equality strategy. He also voted against requiring an annual gender pay gap report from the Equalities and Human Rights Commission.

Between 2002 and 2016, he generally voted for a stricter asylum system in the UK and for stronger enforcement of immigration laws. Notably, he has almost always voted against climate change prevention measures.

Unsurprisingly, in recent years, Labour leader Jeremy Corbyn has rarely rebelled against the whip. But between 2005 and 2010, his rebellion rate was pretty considerable at 25%. He has almost always voted for laws promoting human rights and equality. Like all of Labour, he recently voted to legalise abortion and same-sex marriage in Northern Ireland.

Generally, he votes against laws that would make the UK's immigration system stricter. Corbyn's also not a fan of reducing spending on welfare benefits. (Between 2012 and 2016, he voted 47 times against.) And, in the past, he has almost always voted to help unemployed young people by spending public money to create guaranteed jobs. Finally, when it comes to climate crisis, he generally votes in favour of measures to prevent it.

Jo Swinson's welfare benefits voting record shows that she is largely in favour of reducing benefits spending and of capping benefit increases. This is in line with the rest of the Liberal Democrat party; Swinson has almost always voted the same way as her fellow party members.

Recently, she voted to legalise abortion in Northern Ireland and has almost always voted for equal gay rights, including same-sex marriage across the UK. On the topic of abortion, Swinson has always voted against reducing abortion time limits and against a bill proposing compulsory abortion counselling and a seven-day "cooling off" period.

Climate change prevention proposals have received a mixture of fors and againsts. (Swinson has, however, always voted for imposing higher taxes on plane tickets.) And she's likely never been into the idea of Brexit after consistently voting for the UK to remain a member of the EU between 2018 and 2019.

Green Party leadership is currently shared between Siân Berry and Jonathan Bartley. Berry is a member of the London Assembly and a local councillor, therefore does not have a voting record. She is hoping to stand for London mayor once again in 2020 and is focused on clean air and making living costs more affordable.

Bartley similarly has no official voting record as he is also a councillor. He also hopes to tackle the climate emergency, per the BBC, and plans to "fundamentally change the way government works" in order to do so.

Nicola Sturgeon, leader of the Scottish National Party (SNP) and first minister of Scotland, is almost wholly loyal to the party whip. She does not have a seat at Westminster (but is a member of the Scottish Parliament), making her voting record a little trickier to decipher.

When Sturgeon was health secretary, she got rid of prescription fees and reversed closures of A&E departments, reports the BBC. But her biggest stance involves Scottish independence. She led the independence campaign that ultimately failed with the result of the 2014 referendum. And when Brexit came around, Sturgeon made a second bid for an independence referendum.

In fact, per the BBC, she has recently said she would only back a party in the upcoming general election that would support the "principle" of another referendum for Scottish independence. Sturgeon also wants Westminster to give powers to Scotland over issues such as employment and immigration and is seeking to put an end to austerity. She also supports human rights in terms of abortion, openly stating that, if she were in the House of Commons, she would have voted for amendments in Northern Irish abortion and marriage laws.

As the Northern Irish Assembly has not been functional since January 2017, per the Independent, Democratic Unionist Party (DUP) leader Arlene Foster's recent voting record is non-existent. But she and her party's deeply conservative views have caused much controversy.

The DUP opposes abortion and same-sex marriage (two things that were recently legalised in Northern Ireland by Westminster MPs). As the Independent reports, the party has voted against same-sex marriage legislation on numerous occasions. In 2016, Foster told the Guardian she "would not want abortion to be as freely available here as it is in England."

The party is also the only major Northern Irish party to support Brexit, per the Sun, but Foster is only in favour of a "soft Brexit".

Mary Lou McDonald, head of Northern Ireland's Sinn Féin party, has also not voted on anything recently due to the collapse of her nation's parliament. Her party supported abortion within the first 12 weeks of pregnancy, and McDonald personally supported abortion's decriminalisation, per the Belfast Telegraph.

McDonald is a staunch Remainer in the Brexit debate and, reports iNews, said it would be "unthinkable" not to have an Irish unification referendum if the UK were to leave the EU without a deal.

Plaid Cymru's Adam Price wants to achieve Welsh independence, per the BBC. He has recently called on Westminster to set up a Welsh reconstruction fund, reports the Guardian, that would give the country "justice" for the "crippling poverty" it now faces.

As Price is an MP, his voting record can easily be found. He rarely strays from the party line, consistently voting for equal gay rights, generally voting for ways to prevent climate change, and almost always voting against stricter asylum measures.

More like this
Pret & Costa’s Coffee Is The Strongest On The High Street, According To Which?
By Sam Ramsden
This Is When Netflix Is Going To Start Charging You For Sharing Passwords
By Darshita Goyal
Twitter Has *A Lot* To Say About The "Single Penalty”
By Sam Ramsden
Rita Ora Finally Opened Up About Marrying Taika Waititi & Their "Perfect" Wedding
By Sophie McEvoy and Catharina Cheung
Get The Very Best Of Bustle/UK
Sign up for Bustle UK's twice-weekly newsletter, featuring the latest must-watch TV, moving personal stories, and expert advice on the hottest viral buys.