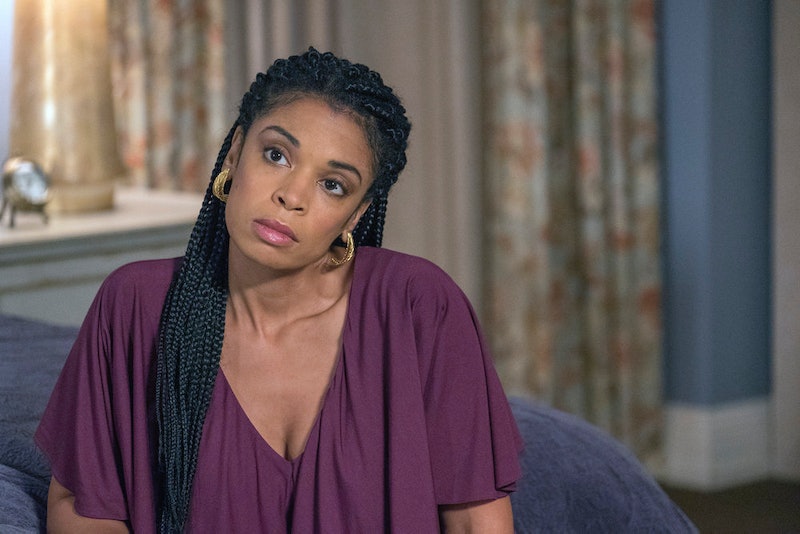 The Pearson family has had a lot of obstacles to overcome in the past, however, they seem to have an even bigger one looming in their distant future. This is, of course, in reference to the various This Is Us "her" theories that have been plaguing fans ever since the future timeline mystery was introduced at the end of Season 2. Who is this person everyone seems to concerned about in the flash forward and what could've happened to them that's cast such a dark cloud on so many of these characters?

Executive producer and co-showrunner Isaac Aptaker has assured fans that "Beth's OK" during an interview with Glamour. So if she is the mysterious "her," then whatever dire situation she's found herself in, it apparently won't be fatal. So it's important to take some sort of comfort in that fact at least. However, that still leaves the fate of a lot of other beloved characters up in the air. It's unclear why Adult Tess doesn't want to go to see this person or why the overall tone of this pending visit feels very, very somber, but it's very possible that death could be coming to collect another Pearson family member. And if that's the case, these "her" theories on This Is Us could help point us in the direction of who it could be.

"Her" & "She" Are Two Different People

Ever since the newest flash-forward, which included Toby into the Old Randall/Adult Tess mix, one popular fan theory that's been circulating is the idea that the "her" Randall and Tess referred to is different from the "she" Toby's talking about on the phone with Randall. Reddit User Marty5151 explains the theory by stating:

[M]y new theory the "her" Randall and Tess are referring to and the "she" Toby is referring to are both different than the actual person in the hospital... Randall and Tess both seem bitter/angry when talking about "not ready to see her yet" if "her" was a loved one I don't think they would sound that way or not be ready to see her... [The] "She" that Toby is referring to is Kate... Toby and Kate are recently divorced but Randall thinks Toby should still be there for Kate.

Marty5151 believes that if Kate is "she" then "her" must be Zoe since that would help to explain the connection for Randall and Tess. As for Kate, given Kevin's close connection to Zoe, it's possible she'd want to be there for her brother during any difficult time in his life, and perhaps she'd like Toby's support, even if they aren't on the best of terms — or maybe even separated.

Given Toby's involvement in the flash-forward and how he looked longingly at the other side of his bed, which was conspicuously empty, many fans are now convinced that Kate is the "her" in question. Though one could argue that it's a little too obvious for a show that loves to surprise viewers.

Neither Tess' younger sister Annie nor her adopted sibling Deja have appeared in the future timeline, leaving some fans to wonder if either of them could be "her." This is only slightly harder to justify given Toby's involvement (why would either of them specifically want him there?). Even if Kate is the separate "she" like the theory suggests, is she really that close to Annie and Deja that she would need Toby there with her for support? There's no telling how close some of these relationships could get over time, so it's possible, though less likely than some other theories out there.

Kate & Beth Are At Odds

Speaking of unlikely theories, reddit user Denaliwolf predicts that Beth and Kate's relationship will get pretty hostile as the season progresses, explaining that:

"What if the reason Beth was stress eating and so busy is that she's just found out she's pregnant and trying to avoid telling Randall since they've got so much going and she feels the baby will complicate things. My theory is Randall finds out and resents Beth for keeping it from him... They find out the baby is a boy and decide to name him Jack William. Kate becomes enraged because she's the "one who can pass on a part of dad." Kate tries to forbid them from calling the baby Jack because that's her name to use."

That part seems possible, given their somewhat tense history, however, the theory becomes a much bigger stretch during the second half Denaliwolf's explanation:

"There's a huge fight between Beth and Kate. Kate grabs a heavy blunt object and beats Beth with it. Beth stops moving and Kate snaps out of it long enough to realize what she's done. The paramedics get Beth to the hospital but it's too late, she lost the baby. Beth is now in a coma and on life support. Kate is charged with assault and infant homicide. When we see them in the future, it's time for Randall to pull the plug and that's why Tess is not ready."

Granted, this show loves its fair share of drama, but this may be a little too extreme, even for This Is Us.

Then again, it's possible that there's a much simpler explanation to all of this. There's one person in the This Is Us family who has strong and direct ties to everyone we've seen in the future timeline and that's Rebecca. The Pearson matriarch would be significantly older during this 10-15 year time jump, which means her health could be in jeopardy. It would also explain why Kate (if she really is this unidentified "she") would want Toby there since losing her mother would be very hard on her, regardless of their problems in the past. Randall was always there for Rebecca, even choosing to go to a different college that was closer to help watch over the family after Jack's death. It would be just like him to convince everyone to come together to say goodbye to the woman who who meant so much to all of them.

Fans will just have to keep watching to see who this mystery person ends up being, but odds are, one way or the other, it's definitely going to make you cry.