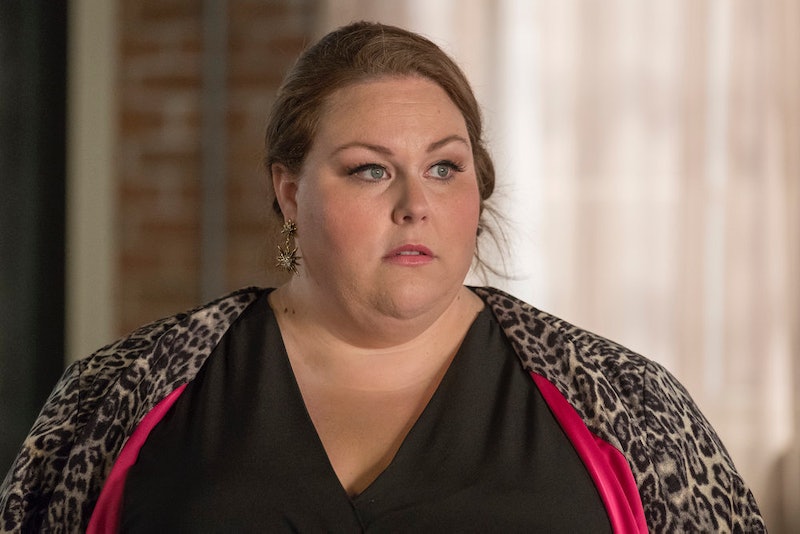 For those who thought they'd be able to just sit back and enjoy the third season of This Is Us, clearly you've forgotten the type of show you're watching. This is a series that prides itself on two things: The number of times it can make fans cry in a single episode, and its ongoing introduction of new mysteries. The latter used to center around the cause of Jack's death, but in Season 3 it's all about the identity of the mysterious "her" on This Is Us, and based on last Tuesday's premiere, the clues that Kate is "her" on This Is Us are becoming more prominent than ever.

If you're in need of a bit of a refresher, the "her" mystery all began last season when a flash forward sequence showed an Old Randall and an Adult Tess meeting up many years from now and discussing how it was time to go see "her," though neither mentioned who this person was or why they sounded so nervous to may her a visit. By all accounts, it's easy to assume that something bad has befallen this unknown character, which is why Tess is so hesitant to go, however, none of that has yet to be confirmed.

Many believed that Beth or Tess' younger sister Annie could be the "her" in question, but after the Season 3 premiere, those theories have turned toward Kate's direction. But in case you're still have some doubts, here are a few clues that indicate why fans have good cause to worry about this Pearson family member's fate.

During another flash-forward, Old Randall made a phone call to Old Toby, asking him to come down and see "her." When Toby responds that he doesn't think it's a good idea, Randall assured him that she wants him there. That's when the camera showed a bed-ridden Toby looking longingly at the empty space on the bed next to him. Why isn't Kate there with him? Maybe something goes wrong in their relationship and they're no longer married — or perhaps she's the one he and Randall are referring to on the phone.

She Has A Connection To Everyone In The Future

Every single character we've encountered within the future timeline shares a close connection to Kate. She's Tess' aunt, Randall's sister, and Toby's wife. If all of them have a reason to go see this "her" person, it would make sense for it to be Kate. Toby and Beth may get along great, but would she ever specifically tell Randall that she wants Toby there? It seems unlikely, which makes Kate an obvious choice.

Last week fans learned that Kate has Polycystic Ovarian Syndrome (PCOS), a condition that can result in numerous side effects, including fertility issues. Kate and Toby decided to go see a fertility specialist in the hopes that she would take them on as clients. During their conversation, the dangers of in-vitro fertilization were mentioned, but Kate said they were willing to accept any and all risks to have a baby. Could this be a clue as to how "her" ends up where she is in the future? One can certainly hope not, but given how much This Is Us is prone to heartbreaking plot twists, we shouldn't rule it out.

Fans will just have to wait and see who "her" ends up being, but if these clues are any indication, Kate's future on the show has never looked darker.