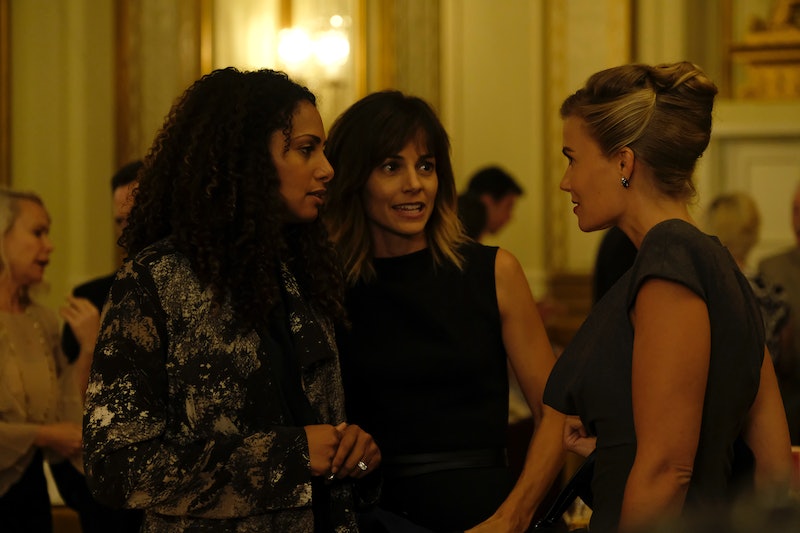 Spoilers ahead for Season 1, Episode 1 of A Million Little Things. From the moment the first trailers began to roll for ABC's new drama, A Million Little Things, this summer during The Bachelorette, the show drew comparisons to an already popular network drama. NBC's This Is Us has reigned in millions of viewers over the past few years, hooking them on its poignant drama and its riveting mystery about how the Pearson family lost its patriarch. The newer show doesn't aim to be a carbon copy, but still employs a lot of the same elements, which is why fans of This Is Us might like A Million Little Things. But at the same time, there are some troubling elements of its premise that make it far more difficult to enjoy.

In the first few minutes of A Million Little Things' premiere, Jon (Ron Livingston), a charming, successful, seemingly happy man, dies by suicide, to the shock and horror of his tight-knit group of friends. The scenes that follow are filled with loved ones supporting each other through mourning and confusion, and they're not unlike the tear-jerking moments of This Is Us.

Even the acoustic, trendy soundtrack, the flashbacks, and sheer number of characters at play hearken back to Dan Fogelman's Emmy winner. It seems clear that A Million Little Things is meant to be a direct competitor with NBC's smash hit, and in some ways, it is. But unfortunately, its heavy subject matter is handled in a way that might turn some viewers away.

The first red flags can be found in the small details — Jon's assistant is seen hiding the note he left behind, and secretly deleting a slew of files from his computer. Almost immediately, it feels like the show is trying to suggest some dark secret in Jon's life potentially pushed him over the edge. This act of dropping clues is a page straight from the This Is Us repertoire — fans agonized for months over every single hint about Jack's death before it was revealed. But the clues presented in the two shows carry much different weights.

Jack's death was the result of a house fire. It was a freak accident — as random and coincidental as a car crash. Jon's death was not caused by a stray spark from a faulty appliance — it was suicide. It feels inherently wrong to speculate on the details that led to it, because truly, no one will ever really know. To act as though the reasoning behind Jon's decision might be neatly pieced together from secrets inside his computer or phone calls he made before he died feels cheap and trivializing compared to the reality of suicide and depression. But, unfortunately, that's what the show suggests, at least in the pilot episode.

Jon's friends also frequently lament that "he seemed so happy," and "had everything," so how could he have done this? That notion in itself feels too surface-level to mean much. Daniel D'Addario wrote for Variety that "after a summer in which high-profile figures like Anthony Bourdain and Kate Spade — who, as far as the public understood, lived lives of success and advantage — died by suicide, the audience has likely come to understand just how complicated private lives can be."

Another way the two series differ is in terms of their respective deaths' effects on the survivors. Jack dies while his children are teenagers — so much of who they become as adults is shaped by how they cope in the wake of his loss, and the memories they made with him while he was still alive.

Jon's friends on A Million Little Things also feel they'll be changed by his death, but in a way that feels endlessly more complicated. Rome (Romany Malco), a third of the trio Jon leaves behind, suggests that Jon's death may have had a purpose. Maybe — just maybe — there's a silver lining here, he says. Perhaps now, they'll all be inspired to live each day to its fullest, and appreciate each other's company even more. Jon was the ringleader of their group, after all, who always wanted the best for them; the show almost seems to suggest that this is just one more way in which he continues to kick their butts into gear.

If you think that sounds a little... off, you're not alone. Changing your outlook on life after mourning a death isn't a bad thing, nor is recalibrating your priorities and realizing what's truly important after losing someone unexpectedly. But A Million Little Things comes dangerously close, at best, to suggesting Jon's death was a necessary evil that had to happen in order for those mourning him to become better people. Claire Fallon for the Huffington Post wrote that the idea of Jon's death being part of a greater good "seeks to imbue needless suffering with nobility and casts the dead and hurting as sacrifices offered up for the benefit of, well, the rest of us."

It doesn't help, either, that the audience knows very little about Jon, other than that he was a kind, fatherly figure, that he might have a few secrets, and that now, he's dead. Daniel Fienberg for The Hollywood Reporter wrote in his review that "This Is Us treated Jack as a real person before treating him like a dead person," and A Million Little Things doesn't do the same favors for Jon. To present the ideas that suicide has a "silver lining" or a tidy explanation is unwise — to conflate nearly Jon's entire existence with his cause of death feels worse.

Despite its many problems, there actually are ways that A Million Little Things nails the vibe it aims for, and in doing so, will likely bring in a lot of the same viewers as This Is Us. You'll probably cry during the funeral scene, when Jon's daughter plays a heartbreaking Joni Mitchell song, and when the guys reminisce over their good times together. The performances are nearly flawless — you believe the characters' heartbreak, and quickly learn how their personalities fit together. There's even potential there to fall in love with a few of them the same way you did the Pearsons, though there's still a long way to go.

Those high points within A Million Little Things are what make the low points so incredibly frustrating. A show that follows a group of friends as they reel from the shock of death is one thing. Reducing suicide to some puzzle to be solved, or a catalyst for other people's personal growth, is entirely different. Ultimately, because of that simplistic point of view, A Million Little Things differs from This Is Us in one major way. Throughout the entire pilot, you can't help but squirm a little bit, wondering if we should be participating in this kind of drama at all.

More like this
Everything To Know About 'Monarch' Season 2
By Gretchen Smail
Is Blake Lively Or Penn Badgley The Richest 'Gossip Girl' Star From The OG Series?
By Hugh McIntyre
Jamie Dornan Just Shared A Major Update About 'The Tourist' S2
By Orla Pentelow
'I Am Ruth' Will Hit Close To Home For Parents With Teenagers
By Maxine Harrison
Get Even More From Bustle — Sign Up For The Newsletter