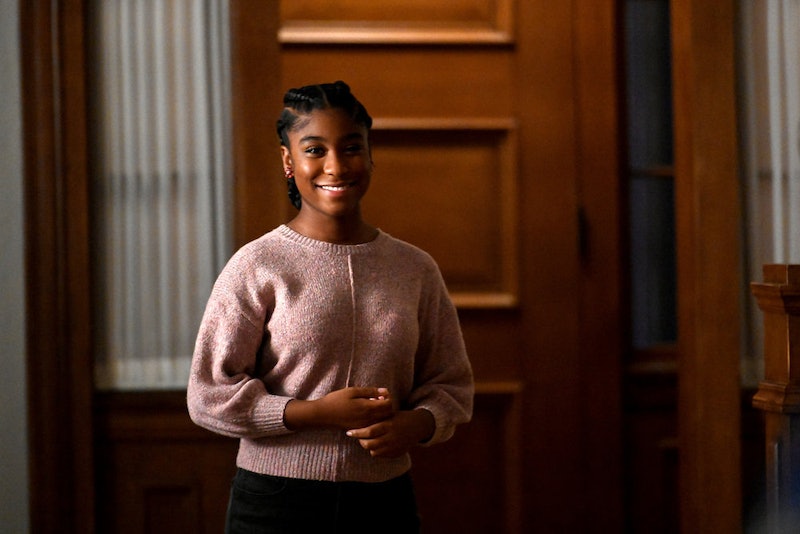 Deja may be looking forward to reuniting with her biological mother on Thanksgiving, but, that may not be the only important character she comes face-to-face with in the near future. During a recent interview with People, Lyric Ross discussed the possibility of Deja meeting Malik's ex on This Is Us and how that interaction would go on a scale of one to super awkward.

“I think Deja might be a little overwhelmed meeting the mother of Malik’s child," Ross told the outlet. "It’s not just because she’s the mother of Malik’s child but she has a history with him." Dealing with something like that would be difficult for even fully grown adults to handle, let alone a teenage girl who is only just starting to have a dating life, making any awkwardness to come completely understandable. "For her to be connected to Malik because of their child, I would be confused if I was Deja," Ross added. "I think it’s going to be a lot of mixed emotions going on in her head."

That's not to say that the two of them won't ultimately decide to get along for the sake of Malik and baby Janelle, but much like basically any story in This Is Us, getting to that point won't be easy.

This isn't the first time the subject of Malik's ex has been a topic of conversation. Series creator Dan Fogelman recently spoke with TVLine about the matter earlier this month and hinted that the mother of Malik's child could show up “potentially this season.” Fogelman also indicated that the premise for her return into the picture would be “less about” her relationship with Malik and “more about what it means from Deja’s point of view."

He added: “This young girl is not just Malik’s ex-girlfriend. She’s an ex-girlfriend who is the mother of his child — a child he spends all of his time and energy on. So it makes it complicated for her.”

Of course, Deja and Malik have already had a little practice with facing drama together. And if their relationship could survive that awkward dinner with their parents, there's no reason to think they can't' overcome any hurdles that come their way when Malik's ex gets thrown into the mix.

Needless to say, it'll take more than a little interaction with an ex-girlfriend to tear this romance apart, so don't expect this 'ship to sink anytime soon.