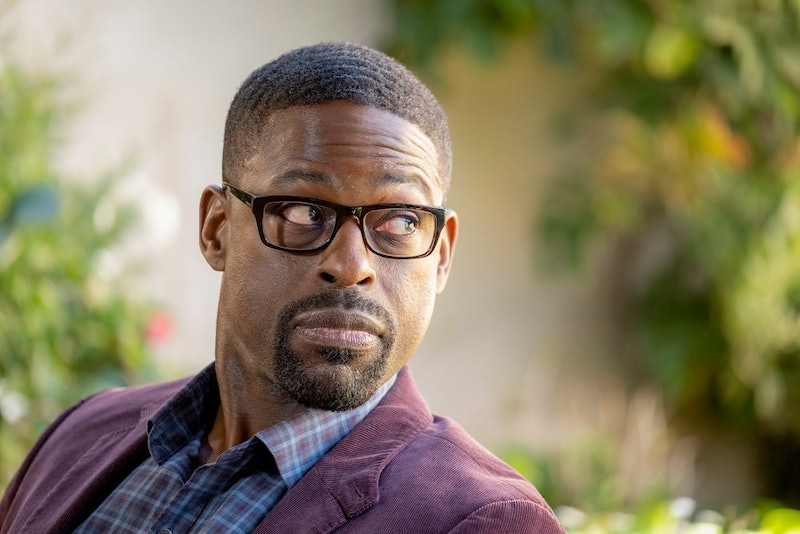 Whenever the Pearsons return, there's going to be a lot in store for them, at least based on Sterling K. Brown's recent teasing of This Is Us Season 5. Brown, who plays Randall Pearson in the NBC drama, shared quite a few tidbits about what's ahead for the Big Three and their mom, Rebecca. Let's just say life's highs and lows are far from over for the Pearson family.

The last time we saw the Pearsons, Randall and Kevin were at odds over Rebecca entering an Alzheimer's clinical trial, Kevin learned Madison is pregnant with his twins, Kate and Toby decided to adopt their second child, and there were major revealing flash forwards. And all of this will come to a head in Season 5, as Brown told Entertainment Weekly.

According to Brown, Randall's past will continue to be explored when new episodes return. "There's something there for Randall that I'm really excited about," Brown hinted to EW. "It has to do with this exploration of past. In a similar way in which we went to Memphis [in Season 1] to find out things about where he came from, his father's family, etc., it's going to be something very much akin to that." However, fans shouldn't expect a repeat of that fan favorite episode, as Brown teased, "But with its own little unique spin on it. I don't want to say too much, but it should be cool."

Brown also revealed that he expects "more backstory on the Miguel-Rebecca connection," which is something creator Dan Fogelman has also previously confirmed. He told People in March that viewers will learn about Rebecca and Miguel's history while they're in St. Louis for the clinical trial. Fogelman said viewers will get a "further understanding how their relationship bloomed then stalled then bloomed again and really getting inside their lives."

It's unclear if or when This Is Us will resume filming due to the coronavirus, but when they do, there's certainly a lot to look forward to come Season 5.