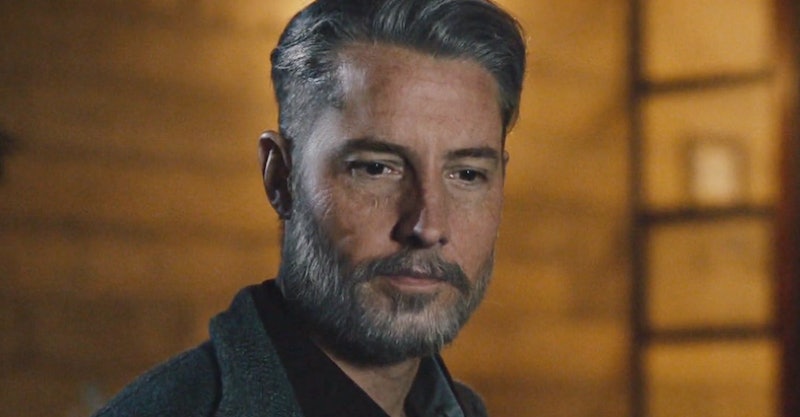 Spoilers ahead for the This Is Us Season 4 finale. It must really be spring, because there are babies popping up everywhere — especially on This Is Us. We learned about not one, not two, not three, but four new extended Pearson family members joining the world in the finale. The last episode of Season 4 covered so much ground with multiple flash forwards to hint at what This Is Us is heading towards in the next couple of seasons.

Fans also got answers about key plot points like why Randall and Kevin aren't talking at the 40th birthday party (um, because they had a complete blowout fight over Rebecca's care and said the most hurtful things possible to each other). We also learned who Kevin's pregnant fiancée is, who Kevin's kids (yes, plural) are, and more about baby Jack's very exciting future.

Because so much happened in just an hour of television, fans may have missed some of the finer points and big connections — like what the deal with Madison's doctor was and why Nicky was with Rebecca in the flash forward. Here are all the biggest things the finale revealed to us about the future of the show.

Kate & Toby Are Going To Adopt

Toby decided that little Jack deserved a sibling like Kate had growing up, but they both agreed that it was too much of a risk for her to try getting pregnant again. Instead, they decided they would adopt.

What We Know About Their Daughter

One of the flash forwards showed a woman named Haley (played by Adelaide Cane) working in an art gallery with her best guy friend Zach, who clearly has feelings for her. However, she told him it wouldn't be a good idea if they dated, and then insinuated that she was already sort of in a thing with a movie star. At the end of the episode we learned that Haley is baby Jack's adopted sister, so maybe the movie star is someone she met through her Uncle Kevin?

Kate & Toby's Son Jack Has A Baby Of His Own

In the future, Jack and his wife Lucy welcome their own daughter — a baby girl named Hope. And so the Pearsons live on... even if Jack is technically a Damon.

In the 40th birthday flash forward, it was revealed that Kevin has a pregnant fiancée. Since he's already 39 and quickly approaching that birthday, it stands to reason that he probably gets engaged to Madison, who's carrying his babies. And in the 10+ years flash forward with old Rebecca, Kevin has a wedding ring on, so it looks like he got married after all. Of course, that's enough time in the future that he could be married to someone else — but Madison, mother of his children, is a strong contender.

Their one night stand turned into a pregnancy, and Madison revealed that she planned to be a mom whether Kevin wanted to be involved or not. He said he did want to be, and that his child would be the love of his life. Madison corrected him to say "children," because she's pregnant with twins. The flash forward shows that they have a boy and a girl, which repeats the Kevin and Kate dynamic.

The two of them seemed very tense at the 10+ years flash forward where Rebecca doesn't recognize Randall anymore. They didn't really talk to one another and when Kevin put his hand on Randall's shoulder, it looked to be less of a brotherly instinct and more of a dedicated choice to try to move past this.

They said some really upsetting things to each other in their argument, like when Kevin told Randall that the worst day of his life is when his parents adopted Randall. It wouldn't be too surprising if tension lingered between them for years after that. Maybe the only thing that can bring them back together is Rebecca seemingly being near death in that years-later flash forward.

Why Nicky Is In Rebecca's Room In The Future

Nicky was wearing a wedding ring in the flash forward with old Rebecca. Unless he got married (which seems unlikely because he's kind of a loner), this may have been a hint to a popular fan theory. It's believed that Nicky is pretending to be Jack to help comfort Rebecca. It would explain why Rebecca's husband Miguel is nowhere to be found and why Nicky is sitting at Rebecca's bedside wearing a wedding ring.

Madison's Doctor May Be More Connected Than We Know

One of the most confusing storylines in the finale was one about a doctor, his daughter, and a frisky horse. Many scenes showed him working to tame the horse, but realizing he was approaching things the wrong way when his daughter said that the horse just wanted to run after being cooped up with so many others. "Little early to give up on him, don't you think? You haven't even given him a chance to be himself yet," his daughter said. The doctor used that same line on Madison during her pregnancy appointment when he encouraged her to tell the father (Kevin), because maybe he would end up being invested in this journey too.

But there has to be a reason the doctor was included in the finale besides just dispensing sage advice to Madison. It's worth noting that his daughter is named Sadie, which is also Jack Damon's dog's name in one of the flash forwards. Perhaps the family becomes as close with this doctor as Rebecca and Jack did with their own doctor, Dr. K. After all, this episode was all about bringing things full circle.

This Is Us will likely return for Season 5 in the fall, but we already have a really strong snapshot about where everyone ends up. Now it's just about filling in those missing pieces that get us there.