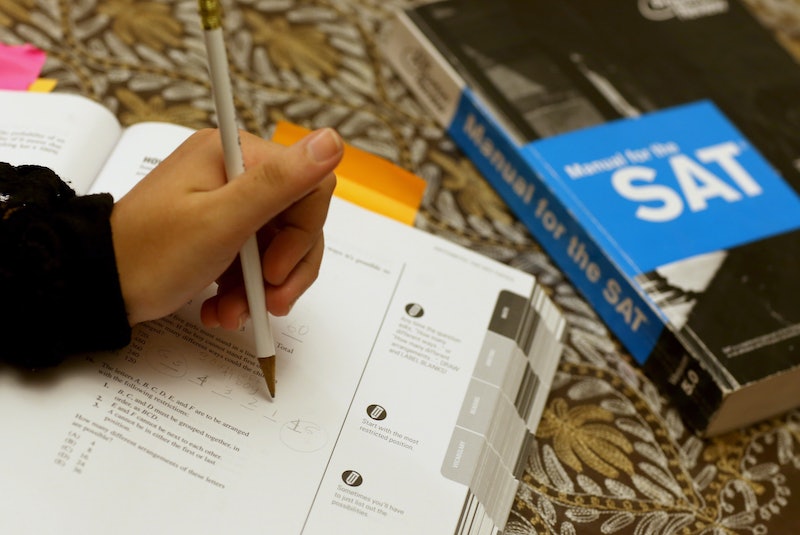 Bustle’s “What’s Missing” is a column that gives space to important insights being left out of the conversation around the most talked about news of the day. In this op-ed, Stuyvesant High School alum Nayyera Haq unpacks what’s missing from the discussions about the elite college and high school admissions conversation right now.

Life is more clear-cut when you believe in testing. You either make the grade or you don’t, and that’s all that’s needed to keep a meritocracy going. I bought into that theory when I went to Stuyvesant, the elite New York City public high school where entrance is determined entirely by the score you get on one test. Reflecting on the makeup of my graduating class of some 900 teens, the fact there were only a handful of black and Latinx students and a near majority of Asian American students validated the stereotypes many Americans have of who is talented and intelligent. Standardized testing plays into those stereotypes, and that's where those tests fail us.

As a society, we desperately want to believe this numbers-based system is just and that tests telling us we're worthy of the next level are correct. While standardized testing seems on its surface like an impartial way to determine one's place in school, there are assumptions that are built into the system. These tests were ultimately designed by people, and people have biases. What's been largely overlooked in the college admissions scandal and in the news that only seven black students were admitted to Stuyvesant this year — out of 895 spots — is that the testing process is biased, too.

Cultural bias infiltrates testing when students are expected to provide correct answers, even where they lack the context to get it right. A famous example of a biased SAT question decades ago asked students to find the analogy of "runner is to marathon as oarsman is to _." The answer is regatta, which low-income students (and anyone not living on a coast) might not know. The question was ultimately removed. While this may not seem like a big deal, such questions that rely on a student's cultural understanding can affect their score on a test that can determine the course of the rest of their life.

The challenge of biased standardized testing follows students throughout their school careers. A text-heavy math section on an exam isn’t a fair assessment of the math skills of students who aren't native English speakers, or who have dyslexia. Familiarity with the language being used on a test can also differ depending on a student's race.

In 2003, a study published in the Harvard Educational Review found that the SAT was "culturally and statistically biased." Seven years later, another study in the same journal confirmed that a bias exists on the test. "These findings are certainly strong enough to question the validity of SAT verbal scores for African American examinees and consequently admission decisions based exclusively or predominantly on those scores," the authors wrote.

Jay Rosner, the executive director of the Princeton Review Foundation, which preps students for standardized tests, said in 2001 that the SAT “is a white preference test and everyone kind of knows it.”

The challenge of biased standardized testing follows students throughout their school careers.

In New York City, parents in the affluent parts of Brooklyn and Manhattan not only encourage their children to take the specialized admissions test, but their middle schools train them to pass it.

By contrast, very few families from my working-class neighborhood on the South Shore of Staten Island were interested in letting their preteens commute 90 minutes to Manhattan for high school. No one else they knew had kids who made the trek — and certainly no one from the local school administration encouraged it — so what reference point did anyone have for how valuable that education could be? When I took the specialized admissions test ages ago, I was one of only three people who applied from my school. Barely a dozen kids from all of Staten Island attend Stuyvesant each year.

In the college admissions scandal, affluent parents reportedly paid thousands upon thousands of dollars to SAT and ACT administrators to fudge test scores that got their children into top colleges. But even after I got to Stuyvesant, there was zero chance my immigrant parents were going to shell out thousands of dollars for specialized SAT prep. If it’s a test of your ability to perform well in college, then there’s only so much you can do. You’re either a genius or you’re not, amirite?

Addressing the outsized role of standardized testing in America's education system won't be easy. But those who control the levers of power can start by acknowledging that talent and intelligence come from all families and in all colors and genders, and by taking a look at the group defined as the "best and brightest" — if they all happen to look the same, then something is wrong with the tests used to decide who makes it into the group and who’s left out.