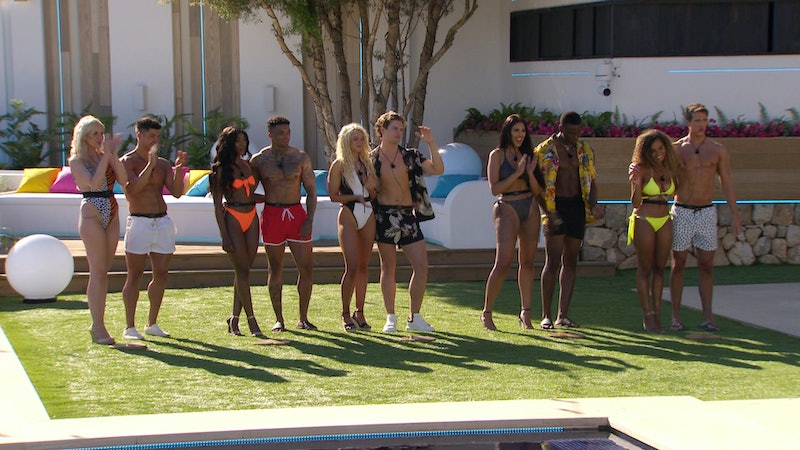 Undoubtedly, the tensest moments on Love Island come when someone new enters the villa. Will they find a person to couple up with, or will they be left on the sidelines? Well, it feels like (relatively) new boy Danny Williams had a pretty easy time of it, and that's because he's got one thing all the girls eyes claim is "their type on paper." He is over six foot. But why is the height of a partner so important to some people? I chatted with some experts on the subject to find out the answer to that question.

Molly-Mae made everyone aware that tall one of her biggest boxes to tick when it comes to guys, and Danny’s height definitely got all the girls' attention when he walked in. Plus, islander Anna even revealed in the initial selection process that she wanted a tall guy to match her stature. Needless to say, height is a *thing* when it comes to Love Island.

Relationship coach and neuroscientist Bobbi Banks says that this concern with height is not exclusive to the Love Island villa, though. In fact, it's incredibly common. "Some of my clients didn’t want to consider a shorter man even if their personalities were a good match," she says. "Men didn’t seem to mind too much and they were open to considering taller women as partners but the women I worked with seemed set in their decision."

So, what is it about height that people find so attractive? Well, Banks thinks it might have something to do with our development as a species. "Evolutionary speaking," she says, "it makes sense that women would prefer tall men as they may come across as stronger and better at protecting their family. Although we might make this choice subconsciously, research has suggested that tall men tend to have higher self-esteem and be happier, and we’re naturally drawn to confident and happy people."

And Banks is not alone in citing evolution as the cause of our height complex. Research conducted by Dutch psychologists Gert Stulp, Abraham Buunk, and Thomas Pollet found that women were more likely than men to think that the man should be taller, and they tended to not want to be in a relationship in which they were taller than their male partners. Pschology Today argued the results of this research could be down to evolution, which has taught us that tall equals stronger and better able to ward off physical threats.

However, Banks also points to more recent phenomena that could be influencing our decisions. "We also shouldn’t forget that we’re conditioned by the media to like a certain kind of appearance and shorter men often face discrimination," she says. Joe Jonas married Sophie Turner in a very secret wedding in 2019 and they may now be one of the coolest couples in Hollywood. However, if you google the pairs name the third result is 'height.' It has been written that Turner "towers" over Jonas and, when she has stepped out in heels, it has been treated like a spectacle because — shock, horror! — she's "already two inches taller" than her husband. This kind of rhetoric feeds into the archaic ideas about men and height.

I wanted to find out if the correlation between height and romantic interest played out among ordinary people — not just those in the Love Island villa. After talking to a group of my friends about whether height is a deal breaker, one told me, “tall men make you feel protected, snuggly, and small. I don’t know if it is natural instinct or me being shallow but I think they need to be 6 foot or above so I don’t look like a giant next to them.” Another said, “I wouldn’t say it’s a deal breaker, if I met someone they ticked all the boxes except height. But it also depends on how short they are.”

Lumen Founder Charly Lester says that, when developing the dating app, they "did a lot of research into which search filters daters wanted [them] to add to the app, and height was always listed as one of the top three choices by women." Similarly, research from dating app The Inner Circle found that 11 percent of singles claim one of the main reason to meet a match in real life, as opposed to on a dating app, is to scope out their height.

The standard that men should be taller than their partners is an idea that has been around for decades. While it may feel natural to you to be interested in tall men, it may also be worth considering where those ideas came from in the first place, and whether they play into the larger narrative at work.

Luckily, over in Hollywood, it would seem that being tall isn’t everyone's type on paper.

As well as Queen of the North Sophie Turner and new husband Joe Jonas, there is Hollywood royalty Cameron Diaz, who is 5 foot 9 inches while her boyfriend Good Charlotte guitarist Benji Madden is 5 foot 6 inches. Then there's Chrissy Teigen and John Legend, who serve couple goals on the daily, and they match each other at 5 foot 9 inches.

When you are online dating or out with your friends, the first thing that attracts you to someone is the way they look. However, height really shouldn't be the only thing you consider. As David Vermeulen, CEO and founder of The Inner Circle, says: "Physical chemistry is important — but ‘types on paper’ aren’t everything. Meet your online dating match in person and sparks could fly for many other reasons, from having an intelligent conversation to the same sense of humour.”

It's definitely something to think about.

More like this
Jess & Anya Are The High School Sweethearts Who Gave Love A Second Chance
By Jessica Morgan
GIRLI & Q Fell In Love At A Skatepark & Never Looked Back
By Jessica Morgan
Megan Barton-Hanson On Bi-Visibility & The Need For LGBTQ+ Love Island
By Sam Ramsden
Melony & Gia Prove That Couples Who Grow Together, Stay Together
By Jessica Morgan
Get The Very Best Of Bustle/UK