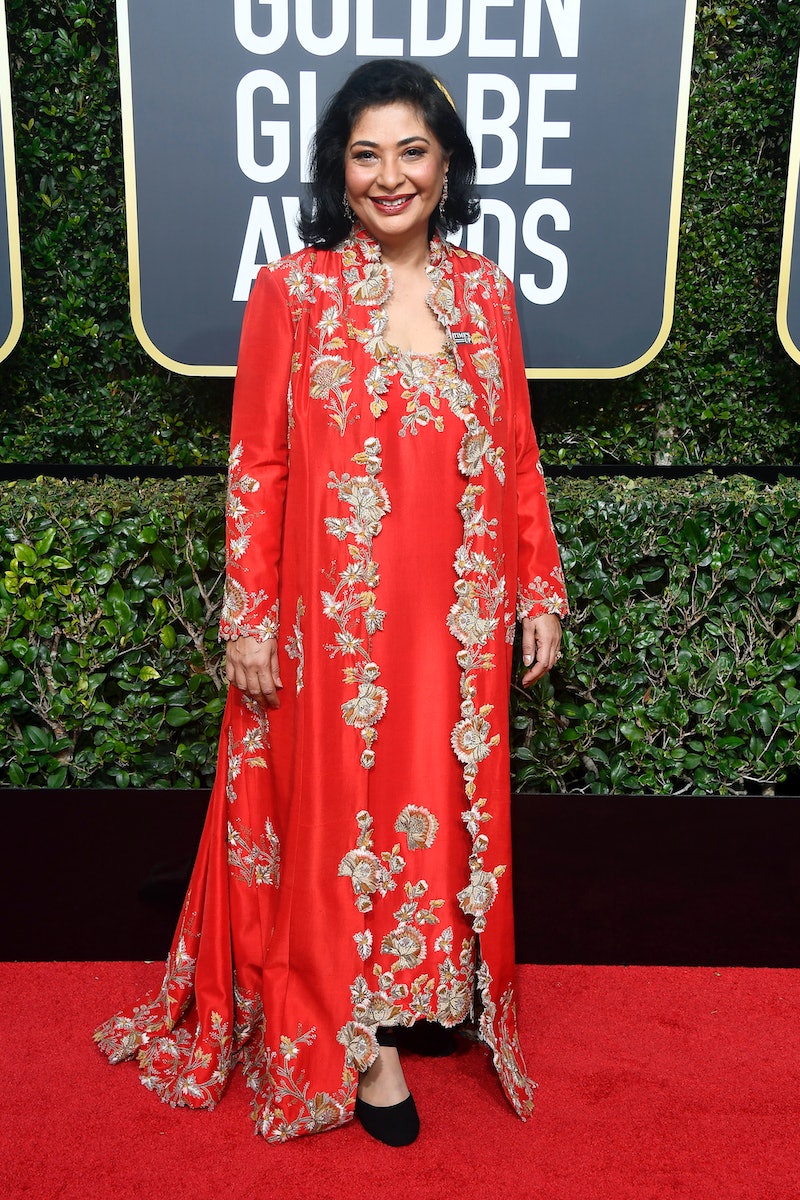 The big talk of the 2018 Golden Globes was more focused on fashion this year than possibly any year in the past. With almost every actor wearing black to the Golden Globes in protest of sexual violence, gender inequality, and sexism against women in the work place, news was abuzz about the act of solidarity on such a prominent platform. But not every person wore black on the red carpet. Hollywood Foreign Press Association president Meher Tatna wore a red gown with embroidered flowers to the much-awaited event, sparking some debate on social media. Tatna is a journalist from Mumbai, India, and told Entertainment Tonight on the red carpet that the choice was a personal one. Tantna also emphasized that she still stands in solidarity with the movement, regardless of what some may have initially thought of her outfit choice without first learning of its meaning to the president.

"My mom and I planned this together a couple of months ago, it is a cultural thing," Tatna told ET. "When you have a celebration, you don't wear black. So she would be appalled if I were to [have] worn black. And so this is, for my mom."

Tatna paired her bright red outfit choice with simple earrings and, most notably, a #TimesUp pin. This emphasized what Tatna has already said about both the Times Up movement and the all-black dress statement. In the same interview, the HFPA president said she stands with all the women at the awards show, noting her own position as president of her organization as evidence of that. "The HFPA is 60 percent women, we'll have our stories. We are also journalists, so anybody who expresses themselves, especially on this topic, we are in solidarity with," Tatna told ET.

In an interview with Vanity Fair leading up to the awards show, Tatna said that the act of wearing all black dresses is something she was happy to hear about — that it signified a time where women finally feel "safe enough" to come forward.

“I am totally in solidarity with them," Tatna told Vanity Fair. "It’s not just in Hollywood that this happens. I was a waitress—the groping and pinching happened . . . back then, nobody felt safe enough to say anything. You thought you’d be fired; you thought you would be ostracized. So yeah, I’m really glad that they found that power, and I hope that this is a time of profound change.”

"Why is the HFPA president not wearing black? Surely she got the memo... heck she probably sent it #GoldenGlobes," one Twitter user wrote, echoing the statements of others who criticized the choice.

While some criticized Tatna for not wearing black like most of the other attendees at the big award show, these criticisms are much like the notion that women shouldn't have attended the award show at all if they truly wanted to protest (another popular, though misdirected, sentiment surrounding the act of solidarity). Women should be able to express their support of other women in whatever way feels right to them — and this shouldn't mean they have to adhere to a dress code that doesn't match up with what they want or that they should have to simply stay home.

Tatna made it clear from that she is 100 percent behind the men and women who chose to participate in the protest. This statement of support is what really matters — not what color dress she wore.

Despite the hasty online criticism about Tatna's outfit choice, it's quite clear from her statements that she wore her red dress for reasons that are important and personal to her. This is all that matters when it comes to what women wear. And frankly, Tatna's dress choice is an important reminder that what women wear isn't anyone's business but their own. The choice to wear red is Tatna's, and she made that clear on the red carpet while emphasizing the strength and power of the women around her. That alone is powerful in its own right.