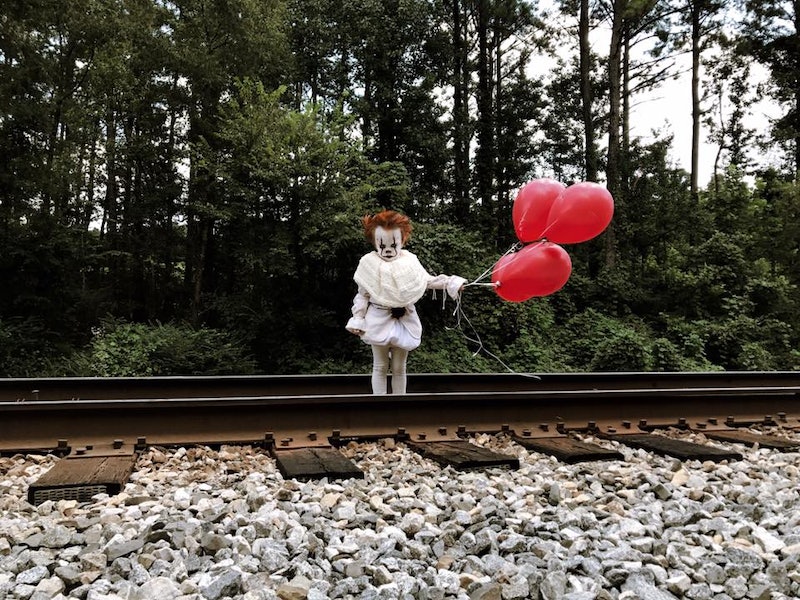 Is your main problem with the movie It that the clown just wasn’t quite creepy enough? Well, I’ve got great news for you. Behold, an It-themed child photoshoot. What do those words even mean together, you ask? Exactly what they sound like! A real, human child dressed up to look like Pennywise, the nightmarish murder clown from Stephen King’s thriller It. It’s fine! I’m fine!

You have Mississippi photographer Eagan Tilghman, 17, to thank for taking something as scary at It and making it even creepier. Tilghman dressed his three-year-old brother Louie to look exactly the killer clown, complete with his red maniacal hair and a handful of red balloons. Then, he went to the woods for a photoshoot. (Moment of pause to think of any unsuspecting passersby who may have seen a tiny Pennywise smiling in the woods.) Tilghman posted photos from the shoot on Facebook last week, and the internet was like, “YES and also NO but on further review VERY YES.” The Facebook photos have over 2,500 likes and have been shared over 3,400 times. An Instagram post of one of the photos even caught the eye of Andy Muschietti, the director for the upcoming remake of It.

Louie’s makeup is spot-on. The outfit is somehow even scarier in child size. There’s a photo of lil Pennywise in the water that will keep you up for months. Tilghman truly has a gift for all things spooky.

Perhaps the photos leave you with a few question, like “why tho?” As the Facebook caption of Tilghman’s photoshoot reads, “I got bored.” Also, this isn’t Tilghman’s first time experimenting with creepy cosplay. “It all started because my other brother, Hosea, who is four, wanted me to paint his face like the Joker,” Tilghman told Mashable. “I did and we just had the idea to dress Louie up and take a few pictures.”

It's a known fact that little kids make scary things even scarier. Could you imagine a tiny Michael Myers from Halloween? Or Friday the 13th's Jason but as a toddler? Do they even make hockey masks that small? Honestly, the idea of a child just playing hockey is enough of a scary movie for me.

In addition to the internet love, Tilghman is hoping his photoshoot catches the eyes of Ellen DeGeneres. Can you even imagine a tiny It dancing across her stage to a Justin Timberlake bop? Is there a word for adorable and scary at the same time? Given Ellen’s love of scare pranks, having Tilghman and Louie (in full Pennywise garb, of course) seems like a match made in spooky heaven. If Tilghman’s photoshoot crosses Ellen’s newsfeed at all, she certainly won’t be able to look away.

Since Halloween is right around the corner, let’s hope Tilghman has some more scary-good costume ideas up his sleeve. We weren't planning on sleeping for the rest of 2017 anyway.