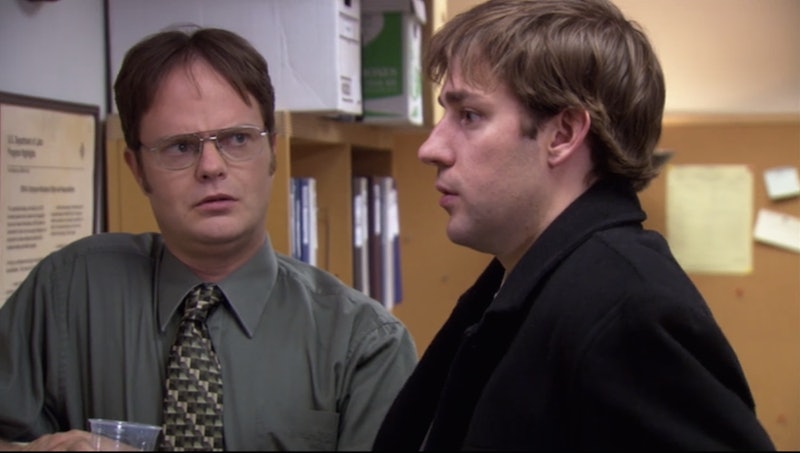 John Krasinski may have moved on from Dunder-Mifflin years ago — and become a full-blown action hero in the process — but to some of his fans, he'll always be Jim Halpert. So, naturally, there is no villain more terrifying for his new CIA operative character, Jack Ryan, to face off against than Jim's arch nemesis, Dwight Schrute, and a brand new John Krasinski Jack Ryan and The Office mashup takes Jim and Dwight's rivalry to a whole new level.

To celebrate the release of Jack Ryan on Amazon on Friday, Aug. 31, Funny or Die mashed up the trailer for the Tom Clancy thriller with scenes from The Office, in which Dwight (played by Rainn Wilson) is a menacing threat, relying on his love of disguises, plots, and surveillance to appear in the background of scenes while "Jim Ryan" tells his fellow CIA agents that Dwight is a "high-level target" with sleeper cells all over the world.

The comedy site's Jim Ryan trailer opens with scenes from the thriller's trailer, where Krasinski's character, Jack Ryan, explains that he is just a "state department supply chain logistician," which means, "I work behind a desk [and] I write reports," interspersed with shots of Jim Halpert hard at work at Dunder Mifflin. But when the agents start talking about their new target, the clip cuts to shots of Dwight in various wigs, standing menacingly on top of a building and announcing, "I am not a security threat." (Which, for the record is exactly what someone who is a security threat would say.)

Of course, the video isn't all quips and genius disguises — things quickly become action-packed once Dwight starts throwing snowballs, because all fans of The Office know that one should never challenge Dwight Schrute to any kind of fight. Any man who is willing to turn himself into a snowman in order to get the upper hand on his enemy is truly an evil mastermind.

Office fans will also recognize that many of "Jim Ryan's" super-spy skills were fist honed while working at the paper company, including his ability to interrogate suspects (a brilliant nod to the show's "Drug Testing" episode, where Jim turned the interrogation about the joint in the parking lot around on Dwight) and his ability to psych out his rivals (see: all of Jim's nicknames for Dwight).

However, despite all of these battle-ready skills and CIA intelligence, it turns out that the best way to get back at Dwight Schrute is to just tap the brakes before he has a chance to get his seatbelt on.

In addition to proving that Krasinski will truly always be Jim Halpert in all of our hearts, Funny or Die's video does make a convincing case that Dwight really is a menace to society. If this video proves nothing else, it shows that all it takes is just a little bit of menacing music to transform Dwight Schrute from an awkward, rule-obsessed salesman into a proper villain.

After all, any man who will casually bring a bull tranquilizer into his office (and point it at his co-workers) is really just a few steps away from becoming an international evil mastermind. Besides, why else would Dwight need wigs of everyone in the office if he wasn't planning nefarious schemes at his desk all day?

As fans await a possible Office reunion, it seems as if Funny or Die's Jim Ryan mashup might be the closest anyone gets to seeing Jim and Dwight face off once more. Although, you never need an excuse to binge watch the series just one more time to get your fix of this iconic rivalry.