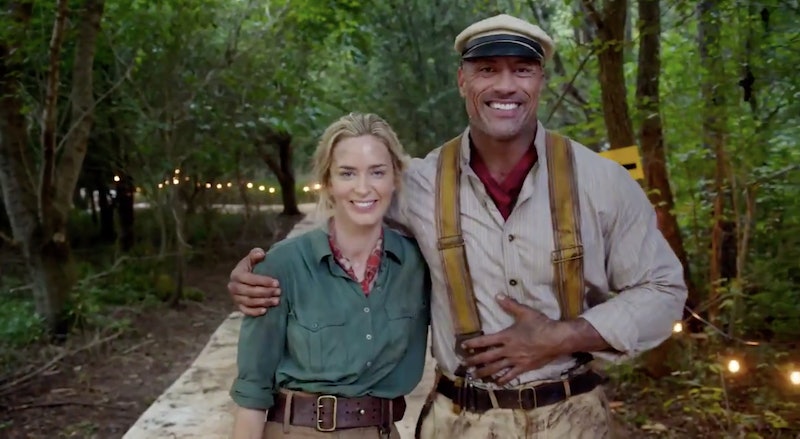 Disney is taking another stab at adapting one of its park's infamous attractions into film, and after watching the Jungle Cruise first look, which Disney posted on Twitter on July 31, it seems as though the production powerhouse is on the right track.

Starring Emily Blunt and Dwayne "The Rock" Johnson, Jungle Cruise is said to take its audience on a magical nineteenth century ride to find an ancient tree with healing powers. But of course, the journey to discovery won't be an easy task, as with any Hollywood adventure. Johnson, who plays Frank, and Blunt, who plays Lily Houghton in the film, will come up against a slew of challenges — namely warding off ferocious jungle habitants and competing adventures, seemingly on the search for the same wonder. Along with Johnson and Blunt taking over the starring roles, actors Jesse Plemons, Edgar Ramirez, Jack Whitehall and Paul Giamatti help to round out the cast. And thriller-afficiando Jaume Collet-Serra will direct.

The first look video opens with Johnson and Blunt decked out in their early 1900's garb, giving viewers a slight tour of the Jungle Cruise's backdrop. References of legendary Hollywood duos, such as Humphrey Bogart and Katherine Hepburn, and Michael Douglas and Kathleen Turner, were made throughout the clip, with the hopes of seemingly likening Johnson and Blunt's onscreen chemistry to their mid-twentieth century jungle-themed classics. And if that's the goal, Disney totally nailed it.

On another note, doesn't Johnson's recent feature resume hint that the entertainer is hanging out with all-things jungle, animal and adventure related lately? Because with the former pro-wrestler on the marquee of box office smashes like Rampage, Jumanji: Welcome to the Jungle and its sequel Jumanji 3 — which was just recently announced — and even Skyscraper, it seems as though Johnson is only setting his sights on thrills. And if it doesn't involve outsmarting villains, leaping from the tallest wonders of the world, or wrestling with creatures, he's not interested.

According to Disney, Johnson's latest Jungle-placed flick is set for an October 2019 release, but the premiere date being pushed a year out hasn't stopped fans from showing their excitement for the project. And of course, they've shared their enthusiasm all over social media.

The Jungle Cruise first look giving you strong Indiana Jones vibes? Well, you're totally not alone. According to the film's visual effects supervisor Jake Morrison, the connection between the iconic Harrison Ford franchise and Johnson's newest role is a bit uncanny. While speaking with ComicBooks.com about the film, which is currently in production, the visual effects supervisor said,

"I mean I've got to say, I'm incredibly excited about the whole thing, it's really like Dwayne is in a new Indiana Jones film. It's Dwayne at his best, and that is a man with some severe charisma."

You have to admit, Johnson does bring a special flair to the screen of each and every project he's in. And with the talented Blunt by his side, moments of fear and bickering will be especially hilarious and charming. The Jungle Cruise is just the beginning on this pair's onscreen magic together.