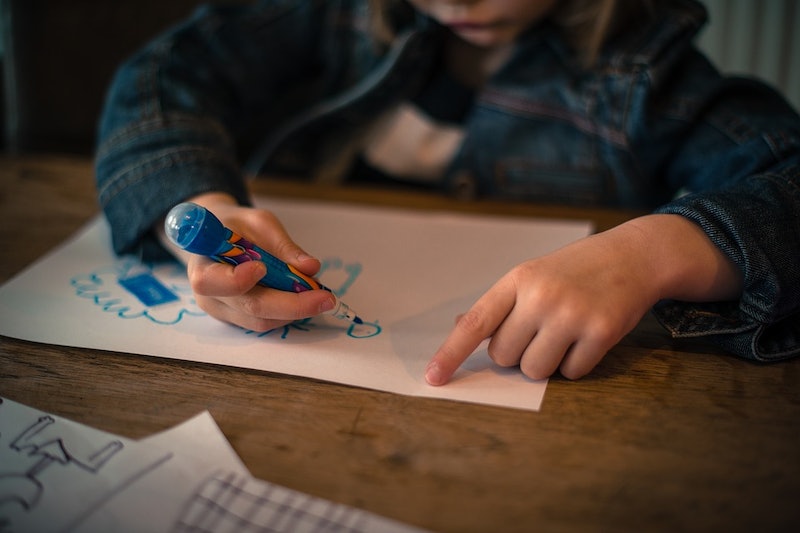 It's always a touching gesture when your child comes to you with a drawing they did themselves, particularly when it's of the family; and to really capture the details of his loved ones, this kid's family portrait included "Mom on her period," and the internet has officially fallen in love.

Five-year-old Julian drew a family portrait and handed it off to his mom, Penny Rohleder, who shared the hilarious (and heartwarming) story on Facebook, along with little Julian's drawing. In the picture, you can see a figure representing Mom; and near the bottom, Julian add a tiny red scribble. That red scribble? Well, that's Mom's period. Rohleder spoke to Metro UK about it, saying, "When I first saw the drawing and realised that it included my period, I was in hysterics. It was such an innocent, honest thing for a young child to come out with."

Rohleder's story was then shared by Constance Hall, the Australian mommy blogger you've maybe heard of thanks to her unapologetic, candid, no-nonsense view of parenting. At the time of this article, the post on Hall's page has received around 24,000 likes and over 700 shares, with many others commenting with their own stories embarrassingly cute stories.

Some disgruntled Facebookers were less than amused with the post and felt it was too inappropriate for the internet. Rohleder tells Metro UK, "I shared it because it was funny, but I was also proud that my 5 year old knows what a period is, when some fully grown men do not. It's such a taboo subject for many adults, especially men. Women too, are embarrassed about their bodies and I have absolutely no idea why."

While the drawing was surely sweet and innocent (and incredibly funny), some of the negative reactions point to a bigger issue: the shame and secrecy we still feel over menstruation. Of this, Rohleder says, "It’s not an 'unsafe' topic, it’s a normal bodily function that women shouldn't be made to feel embarrassed about."

While the shame and censorship surrounding periods continue, it's reassuring to note that for the most part, responses to sweet Julian's creation were positive. He's growing up in an honest, realistic environment where women have periods and it's not a huge deal — something women hope more people will catch on to.