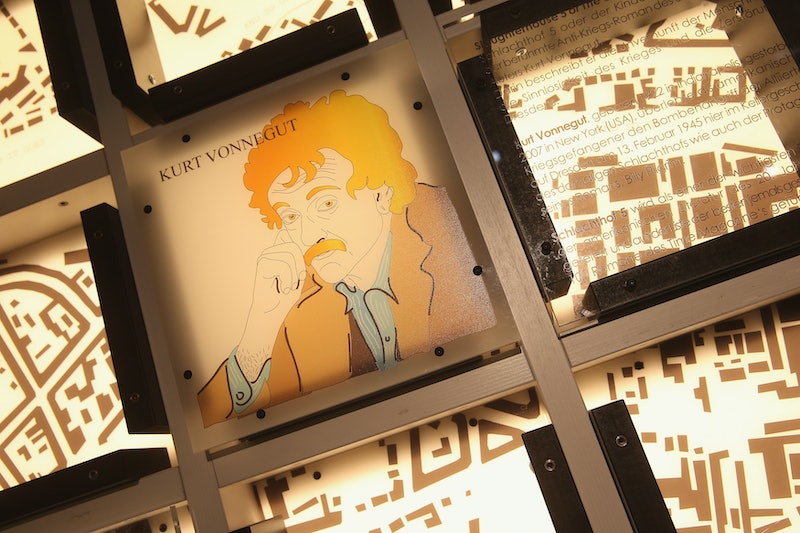 You can't touch it, but you can certainly feel it. You can't buy it, but you can create it. You can't see it, but you can easily perceive it. I'm talking, of course, about happiness, that ever-illusive feeling of contentment and joy we're all constantly chasing but rarely ever catching. It's called fleeting for a reason: one instant it's there, the next it's gone, and to experience it in the moment is a truly wonderful thing we don't do nearly enough. At least, that's what author Kurt Vonnegut taught me.

Somewhere between by sophomore and junior year in college, I became enamoured with the legendary satirist. I had somehow missed out on Slaughterhouse-Five in high school so it wasn't until a friend gave me a beat up copy of God Bless You, Mr. Rosewater that I was introduced to what would become one of my favorite writers of all time. In Kurt Vonnegut's work, I found a voice that spoke directly to my bizarre and sarcastic soul. His morbid comedy and dark satire perfectly captured my own outlook on life and modern society — namely, it had a lot of potential for good that was constantly being squandered away by materialism, technology, and conflict. Vonnegut's writing might have been simple, but it expressed complicated ideas about the disappointing world he lived in, and the many ways in which America continues to fail to live up to its promise of life, liberty, and the pursuit of happiness for all. In Vonnegut's struggle between idealism and cynicism, I saw my own outlook on the world come to life: we are all here to help each other, yet more often than not, we fail miserably to do so.

I was so enamoured with Vonnegut's writing that it even influenced my post-college career. Knowing I wanted to work in the book world, I sought out jobs and internships at large publishing houses and small presses that published his work, and eventually got one. It was during my first week at Seven Stories Press, and independent press in New York, that I found A Man Without a Country, Vonnegut's hilarious and biting essay collection. Inside the slim but powerful book, the author shares his funny yet pointed views on everything from art and humor to politics and technology in modern American society.

A Man Without a Country by Kurt Vonnegut, $11, Amazon

There, in the final pages of his short book of musings, Vonnegut dropped a wisdom bomb that completely shattered my faulty view of happiness and our ability to enjoy:

"But I had a good uncle, my late Uncle Alex. He was my father’s kid brother, a childless graduate of Harvard who was an honest life-insurance salesman in Indianapolis. He was well-read and wise. And his principal complaint about other human beings was that they so seldom noticed it when they were happy. So when we were drinking lemonade under an apple tree in the summer, say, and talking lazily about this and that, almost buzzing like honeybees, Uncle Alex would suddenly interrupt the agreeable blather to exclaim, “If this isn’t nice, I don’t know what is.”

So I do the same now, and so do my kids and grandkids. And I urge you to please notice when you are happy, and exclaim or murmur or think at some point, 'If this isn’t nice, I don’t know what is.""

I'll be the first to admit that chronically happy people have a way of getting under my skin. What is it that they have to be so cheerful about, and why oh why can't I get a hit of it? Being joyful doesn't come easily to me, and I have struggled with anxiety and depression all my life. But when I came across Vonnegut's advice, this idea that we should acknowledge when we are happy and exclaim it out loud, something inside me shifted. Suddenly, happiness wasn't this unattainable state of being I was always striving for but never reaching. It was something I could find pockets of in the everyday, if I was willing to do the work.

It is so easy for us to notice when we are unhappy, and even easier to express those feelings out loud. How many conversations do you have in a day that consist largely of you and a friend, coworker, or family member airing your respective grievances? Now think about how many conversations you have in a day about your happiness. Did you struggle to come up with one? Don't worry, you aren't alone. We live in a world where the bad is easier to find, and even easier to talk about, than the good, but what if things could be different?

If you want them to, if you try and notice those moments of happiness like Vonnegut urges us to, they can be. Or at least, they were for me. After reading this passage in A Man Without a Country, I decided it was high time I started celebrating my happy. It wasn't easy at first — in fact, the first few weeks I bemoaned my inability to find even an ounce of contentment in my every day. Over time though, I started to lean into the moments in the day where I found slivers of joy: my first cup of coffee in the morning, someone holding the elevator door for me at the office, a sweet text from my boyfriend in the middle of a hectic afternoon. Like those people who find their perspectives altered by gratitude lists, I found mine completely turned upside down when I started to acknowledge and appreciate my own happiness, however small and fleeting it was.

If This Isn't Nice, What Is? (Much) Expanded Second Edition: The Graduation Speeches and Other Words to Live By by Kurt Vonnegut, $16, Amazon

Clearly, I am not the only one who has found comfort in Vonnegut's advice. In 2016, a collection of the author's graduation speeches and short essays was released bearing the title of the quote I've constructed my view of joy around: If This Isn't Nice, What Is? The subtitle of the book lets readers know it contains "words to live by," and I have to agree, because I've been living by Vonnegut's advice for over half a decade, and I can honestly say its transformed my life.

On the days where I can feel my blood boiling under my skin, the afternoons where I would rather claw out my eyes than read one more email, the nights where my heart heavy I'm not sure how it keeps beating, I try and find moments in between that are just simply nice. I reach for my dog, who loving licks my hand, or I turn on a song that makes me smile, and I think to myself: If this isn't nice, then I don't know what is. And I mean it.