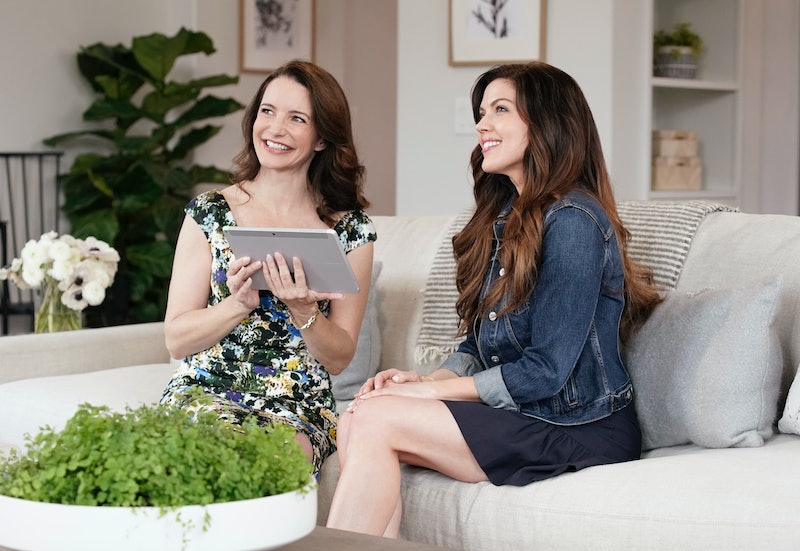 There's a new dating show to watch while in quarantine, and it makes recent phenomenons like Love Is Blind and Too Hot to Handle look very tame. This Labor Of Love clip shows just how bonkers the new dating show will be. The concept is essentially the same as The Bachelorette, but with a heavy focus on parenthood, and a whole new level of ridiculousness.

On the upcoming reality show, aspiring mother Kristy Katzmann is on the hunt for the perfect man to spend the rest of her life with. But something that she's taking into special consideration is how they would be as fathers, so she's examining everything about the contestants... including their sperm. Yes, it's as wild and invasive as it looks.

In the new clip, host Kristin Davis (yes, Charlotte from Sex and the City is here) explained to Kristy's suitors that they'll have to go through some tests to determine their ability to become parents — literally. "Part of this process is figuring out if you're all fit enough to be fathers," she told them. "I mean that in the most literal sense possible." Suddenly, waiters come through with specimen cups on their trays, utterly perplexing the men. "We're not here to mess around," Davis said.

Their reactions range from taking the task in stride with laughter, to an utterly horrified "Oh my god," with someone saying that the host and Kristy were ruthless. "I did not see this coming," one contestant, Matt, remarked in the clip. "No pun intended." Neither did anyone else, Matt.

As reported by E! News, each episode will see Kristy put the contestants through a different grueling challenge in order to assess their potential skills as both future husband and father to her kids. Much like how Bachelor Nation uses Chris Harrison as their pseudo-therapist, Kristy will use Davis as her own consultant, helping her decide which man is the right fit for her future after eight weeks of competitive courtship. No word yet on whether there's a Fantasy Suite, but considering the focus on baby-making, it wouldn't be surprising.

"When I first heard the premise of Labor of Love, I knew I had to be a part of this show," Davis said in a statement when the show was announced, as per Deadline. "I believe every woman should feel empowered to go after their dreams, whether it be professional or personal, and to be at Kristy's side as she took her future into her own hands was truly exciting."

Labor Of Love premieres on FOX on Thursday, May 21, and, knowing reality TV, it's only going to get weirder.

More like this
RHOP’s Robyn Dixon Explained Why Juan Paid For Another Woman's Hotel Room
By Brad Witter
'Love Island' Has Added Yet Another Bombshell To The Villa
By Bustle UK
Kylie Jenner Clarified How To Pronounce Her Son's New Name
By Jake Viswanath
Joey Essex Is Rumoured To Be Dating A 'Love Island' Favourite
By Sam Ramsden
Get Even More From Bustle — Sign Up For The Newsletter
From hair trends to relationship advice, our daily newsletter has everything you need to sound like a person who’s on TikTok, even if you aren’t.