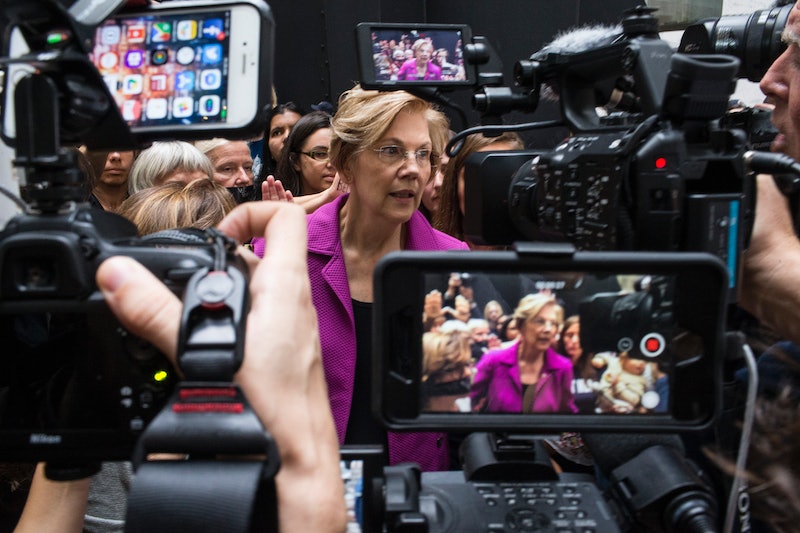 The media needs to change how it treats women candidates vying for the presidency in the 2020 election, according to a coalition of women's rights groups. At least 20 organizations signed a letter calling out "sexist" 2020 coverage of women candidates in the 2020 Democratic primary. Furthermore, the groups laid out three demands they believe will ensure women candidates receive equal coverage and are treated fairly.

Organizations like Ultraviolet Action, EMILY’s List, Feminist Majority Foundation, Not Without Black Women, Women's March, and others highlighted what they believe are big problems with the press coverage of women candidates. According to the groups, these include limited exposure by the press, "sexist tropes" about a woman's ability to lead, not enough attention paid to candidates' backgrounds and policies, and "electability" tests that critics have denounced as sexist ways to assess a female politician's potential in elections.

To combat such inequality in media coverage, the groups listed three changes they want to see happen. Their first demand centered on representation among debate moderators. Signatories urged the media to make sure that "half of their moderators for debates and town halls be women and half people of color for both the primary and for the general election." Special emphasis should be placed on uplifting the voices of women of color, they added.

In their second demand, the groups asked the press to make sure that male candidates were asked to talk about "sexism, maternal health and mortality, abortion access, and sexual assault [or] violence." As HuffPost noted in April, only women 2020 candidates were asked about their thoughts on sexism at CNN's town hall event that month. Male candidates should have to address the issue as well, per the letter.

In their third point, the groups cited a study from the Northeastern University's School of Journalism that stated women on the 2020 campaign trail weren't being treated fairly compared to their male counterparts. By conducting a text analysis of news articles, researchers found that female candidates were "consistently" treated negatively in the press. This problem had to be tackled, the groups said.

In addition to these demands, the coalition also wrote that news media should cover and evaluate these women candidates based on their platform and experience instead of only asking them about sexism in politics. Outlets should also give women and men contenders the same amount of media exposure, the organizations said, citing a FiveThirtyEight analysis from April.

In April, FiveThirtyEight reported that Democratic presidential candidates Vermont Sen. Bernie Sanders and Mayor of South Bend, Indiana, Pete Buttigieg were the first and second most-mentioned contenders in media. "The media plays a central role in educating the public about candidates, especially with such a crowded field," the signatories emphasized.

Given that, per Quartz, there are at least five Democratic women running in the 2020 presidential race, it's possible that more progressive groups will make similar demands. Though it's hard to predict just how the letter will be received in the immediate future, the coalition sounds determined to even out the playing field when it comes to 2020 coverage. "The media has the power to form and shape voter opinion on candidates," the signatories implored, "and to even sway an election."