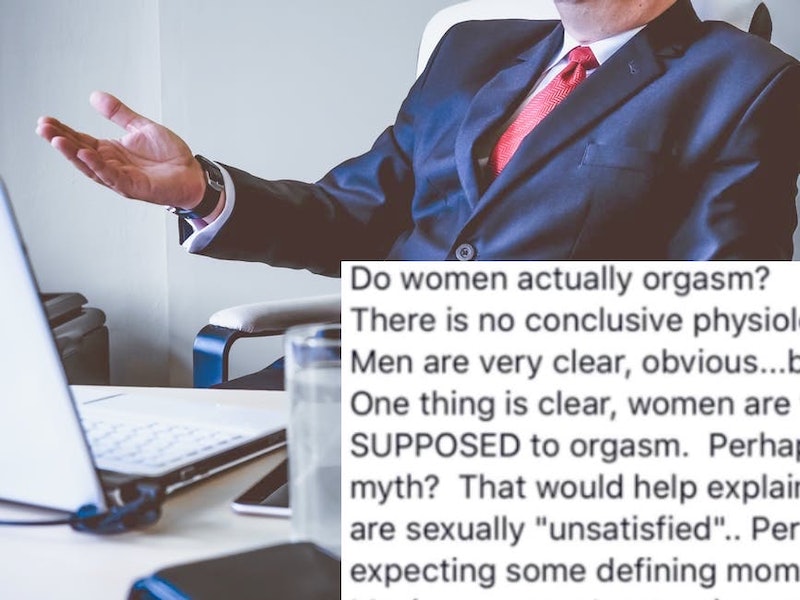 Breaking news: After centuries of debating whether women can orgasm, one man — not a woman, of course, because how would their delicate minds comprehend such a complicated concept? — has stepped forward to settle things once and for all. Ladies, you no longer have to wonder if your sexual partner is mediocre. According to some guy named Kyle, who made a post regarding the subject on Facebook, women simply cannot orgasm. The female sexual climax, he has decided, is a myth after all.

"But Kyle!" I can hear you cry. "Women orgasm all the time. Just ask any of your sexual partners or friends who are women!"

Kyle was prepared for exactly that response. In a Facebook status posted on Thursday, he laid out the case that women are "taught that they are SUPPOSED to orgasm," but it is an "unreasonable myth" to expect to have a defining sexual climax. The crux of the argument is that women may simply have a different sexual experience than men — one that doesn't include orgasm.

I'll let Kyle himself explain his thinking on this one. The Facebook status in question reads:

"Do women actually orgasm? There is no conclusive physiological evidence of it. Men are very clear, obvious... but women not so much. One thing is clear, women are taught that they are SUPPOSED to orgasm. Perhaps it is an unreasonable myth? That would help explain why so many women are sexually 'unsatisfied.'"

He went on to posit that women anticipate their sexual experience to follow the same trajectory as the other half of the human population. "Maybe a woman's sexual experience is just totally different from a mans [sic]?" he concluded, adding that he planned to conduct his own research on the matter.

But while Kyle may think he has come up with a groundbreaking hypothesis, other interpretations are less flattering. When writer and blogger Parker Molloy screenshotted the status and posted it on Twitter, Kyle was thoroughly, roundly (and hilariously) mocked.

Molloy tweeted Kyle's status on Saturday, and by Monday morning, it had gone viral, with nearly 2,000 comments. Naturally, there was an influx of tweets that questioned his judgment.

Molloy had a field day comparing Kyle to various clumsy and/or clueless GIFs.

Many users pointed out that if he doesn't believe in female orgasms, Kyle may have never witnessed one firsthand.

Any time a grown man is making comments like this, it probably doesn't bode well for his partners.

His Hypothesis Is Flawed

The female orgasm isn't the sexual equivalent of Bigfoot. There's plenty of evidence out there, provided you actually give women credit for understanding their own bodies.

An accurate assessment of the situation.

For his part, one man felt he should stand up for the reputation of other Kyles.

Apparently, Kyle kept everyone updated with his friends' responses to the initial Facebook post, and, well, yikes.

A Man With True Integrity

Only a true hero would offer to explore the female orgasm in person, despite questioning its existence.

That's the last of the sexual incompetence jokes. I promise.

A quick Google search would have shown that the Master and Johnson research team documented plenty of physiological evidence for female orgasms.

Real talk here. People (read: men) have been questioning the existence of female orgasms for decades, if not centuries, and all goes back to the prioritization of male sexual pleasure. Even after the sexual revolution of the '60s, cultural norms teach us that male pleasure is seen as a requirement for sex, while female pleasure is a happy accident. If a woman enjoys a sexual encounter, great! But it's not seen as central to the proceedings. With that in mind, it's no wonder an orgasm gap exists between men and women.

So our friend Kyle may have been the one to publicly put his foot in his mouth, but he's not the only one to believe that women can't orgasm. Let's just hope someone, even if that someone is the entirety of Twitter, teaches him otherwise one day.