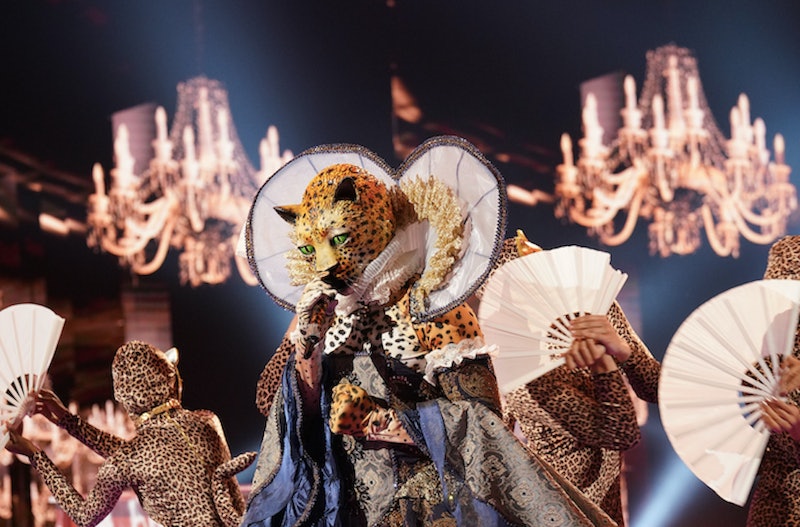 This early in the season of The Masked Singer, it's still impossible to know who all the celebrities are hiding under the masks. But, after Oct. 2's episode, there is one Masked Singer Leopard theory that seems especially strong. The Leopard made his debut Wednesday night, and fans are convinced that the individual behind the mask is none other than a famous '90s musician who was once married to Heidi Klum. Is Seal the Leopard?

Seal first became famous in the early '90s with "Crazy." He's also known for other hits including, "Love's Divine," "Fly Like an Eagle" from Space Jam, and "Kiss From a Rose," which was on the Batman Forever soundtrack. He's now 56 and he just might be performing on the Masked Singer stage.

The judges were completely thrown off by the Leopard, who was dressed in an elaborate gown. At first, they assumed it was a woman, but as soon as the Leopard sang "Somebody to Love" by Queen, they realized they had been fooled. And the clues weren't all that helpful to the judges either. Though, that's probably what the celebrity wants. As the Leopard said in his clue package, "But now I'm stripping away the headlines and everything that has come to define me. Behind this mask, I will show the world why I've been and always will be the Leopard."

Based on the Leopard clues, there are several hints that suggest Seal is wearing the mask. Good thing he made it through the first round, because fans need more clues to see if their top guess is right.

Until the Leopard sings again, here are the clues that seem to suggest that Seal is masquerading as the Leopard.

"Spotted With The President"

During a sneak preview of The Masked Singer that aired before the Season 2 premiere, the Leopard gave the following clue: "I'm ready to move meow-tains with my spectacular purr-formances. The security here reminds me of the secret service — and I should know, I've been spotted with the president." As pointed out by @Rockgamegirl, Seal faced backlash for serenading the president of Chechnya in 2011.

As previously mentioned, Seal's first major hit was "Crazy." In the Leopard's clue package, a newspaper headline read, "Crazy Game Ends with win for the LEOPARD." This could be a reference to his song.

As his final clue of the evening, the mystery celebrity said, "Leopards can be fierce and yet so divine," which could've been a reference to Seal's song, "Love's Divine."

Another newspaper in the clue video read, "Out of Hits and Out of Time." Hits could be hinting at Seal's many popular songs. As for "time," this might refer to Seal's song "Fly Like an Eagle," which has the lyrics, "time keeps on slippin', slippin', slippin'." The was also a clock in the background of the video.

"And I know what it's like to be at the top. In my career, I've been a heavy hitter. No one could catch me," the Leopard said in his clue package. "But, now, all anyone wants to talk about is the celebrity aspect. You know, I really don't care what they say about what I'm wearing or even in my relationships."

As fans pointed out on Twitter, Seal is known for his marriage to model Heidi Klum. They split in 2012 after eight years together, which made plenty of headlines and is a topic he's asked about a lot. He has previously made it known that he prefers a more private life. While discussing his extravagant vow renewal ceremonies with Klum during Andy Cohen's Sirius XM radio show in 2015, Seal said, "That was my ex-wife’s idea, to be honest. It kind of turned into a circus which I wasn’t terribly fond of. Because I’m, by default, I’m quite a private person."

The Leopard explained his costume choice on the show, telling the judges, "I am the Leopard, because I am adaptable and can survive anywhere, even under the harsh conditions." According to an interview Seal did with The Guardian in September of 2010, he was placed in foster care as a baby, and was eventually returned home to his biological family, where he alleged he was physically abused by his father. At 17, he also left home and became homeless. It's unclear if this is what the Leopard is referring to, but it certainly qualifies as "harsh conditions."

Like @BryceIsHEERRE tweeted, there is a Leopard Seal animal, so Seal dressing up as a Leopard isn't that far fetched.

Fans of the Masked Singer seem convinced that Seal is the Leopard. But, as the Leopard made it to the next round, the real identity of the celebrity behind the mask has yet to be revealed.