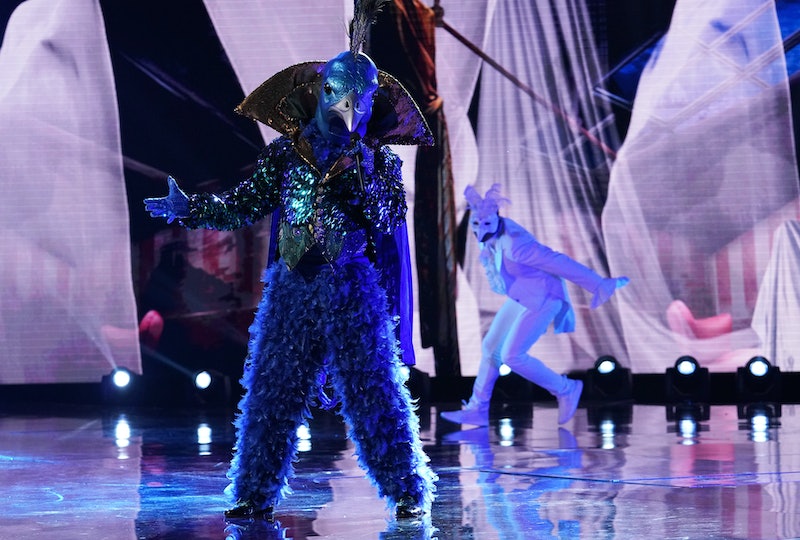 Midway through The Masked Singer, pretty much everyone left has the chance to win the competition, and it seems likely they'll be able to squeeze by without being identified by the show's panel. The judges missed a Masked Singer clue about the Peacock that basically confirms it's Donny Osmond. Even though Jenny McCarthy almost suggested Osmond's name, she hesitated because the long brown wig threw her off.

Said wig was unveiled during the "show and tell" portion of the Feb. 6 episode. The Peacock said that because of it, he landed in jail, which threw the panel for a loop. They guessed David Hasselhoff, Neil Patrick Harris, Shaun Cassidy, David Copperfield, and Wayne Brady — who would be a great future contestant if he's not the Peacock.

Online theories range from Brenden Urie to Ricky Martin and Michael Bolton, but for those familiar with Osmond's career, the wig was a total giveaway. It's clearly the wig that he wore as the title character in Joseph and the Amazing Technicolor Dreamcoat. In that musical, Joseph is thrown in jail. It also explains the coat of many colors in his opening clue package that the judges thought was a gay pride rainbow — which it was not, as one of its stripes is brown.

Osmond has appeared on Broadway three times: as the title character in the 1982 revival of Little Johnny Jones, as Gaston in Beauty and the Beast, and as himself in the holiday special Donny & Marie, alongside his sister. However, Joseph is hands down the musical theatre role he is most famous for.

While Osmond did not play this role on Broadway, he starred in the Toronto production, toured the United States, played more than 2000 performances as Joseph, and starred in the 1999 film that's basically a stage production. Check it out for yourself below; that's 100 percent the same wig that the Peacock revealed in The Masked Singer.

But as GoldDerby notes, the Peacock's hints have been pretty revealing throughout the season. He said that he's had "many different incarnations" of his career, which makes sense since he hosted a TV variety show with his sister, Marie Osmond, in the '70s and a talk show two decades later, as well as appeared on Dancing With The Stars and opened a Las Vegas nightclub.

The Peacock also revealed that performing on Masked Singer made him feel like he "was 5 years old again," which again checks out because, GoldDerby continues, Osmond was just five when he joined the Osmond Brothers on The Andy Williams Show in 1963. Finally, the Peacock said he "started out as a little teeny bopper," and Osmond was famous throughout his teenage years.

When McCarthy guessed that the Peacock could be Osmond, the masked performer cackled — maybe to throw the panel off his scent or maybe out of nervous relief that somebody finally said his name. We won't know for sure that it is (or isn't) Osmond until the Peacock loses a match-up or wins the show entirely, but based on the evidence so far, Osmond is a pretty safe bet.