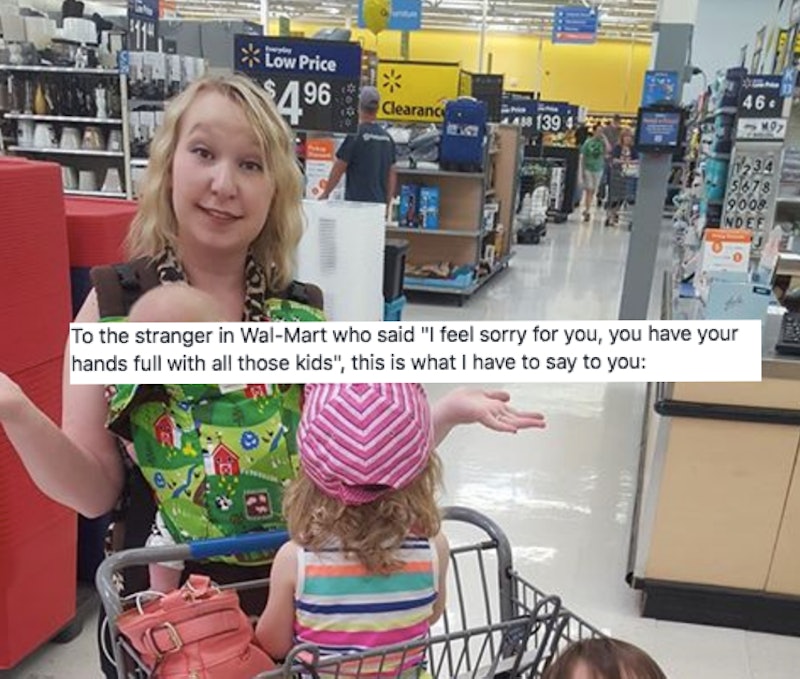 Although going shopping with kids in tow can be stressful, Courtney Lester, mother of three, has got it handled. That didn't stop a total stranger from pulling her aside during a recent trip to say he felt sorry for her, but she got in the last word with a Facebook post shutting his comments down. One month later, it's received more than 12,000 shares and twice as many Facebook reactions, so it's safe to say she came out on top of this one.

Lester was out running errands at Wal-Mart with her three young children when she was approached by another shopper. "I feel sorry for you," he told her, according to Lester's post. "You have your hands full with all those kids."

He may have meant well, but the implied judgment struck a nerve with Lester, who responded publicly online. If he absolutely had to feel sorry for her, she wrote, there were better reasons for his pity — ones that didn't have to do with the size of her family. She wrote:

What you can't tell is that I lost two babies before being blessed with my last two, so if you want to feel sorry for me, there's the only reason why you should. My children are blessings. They aren't perfectly modeled citizens because, well, they're children.

Although she admitted that like all young children, her kids have been known to misbehave, they were fairly quiet when the man decided to make his pity known. Her newborn was sleeping, and her four-year-old was singing in the shopping cart while her sibling listened. "If that is your definition of having your hands full, I feel sorry for YOU," Lester wrote.

She told Parents magazine that the man's tone bothered her enough that she couldn't forget about it even when she tried. After some encouragement from her husband, she decided to air her thoughts online. The post quickly spread beyond her friend group, with most comments applauding her response. When a few people pointed out that the stranger probably meant to express sympathy, though, Lester edited the status to clarify her problem with his remarks.

The "hands full" comment isn't exactly what bothered me. It was the fact that someone went out of their way to say they felt sorry for me BECAUSE of my children, in front of my children.

She added that people often remark on the size of her family, but the suggestion that her children were an inconvenience rubbed her the wrong way. "Even on days when they won't listen, have meltdowns, and when it seems like nothing I do is good enough, I have never felt sorry for myself and I don't expect others to either," she wrote.

To be fair, raising a family is difficult. In a study released this week, researchers found that between their careers and household duties, working mothers put in an average of 98 hours of labor each week. (That's equivalent to two full-time jobs.) But that doesn't mean children aren't rewarding, and there's no need to pass judgment on other people for having a family.