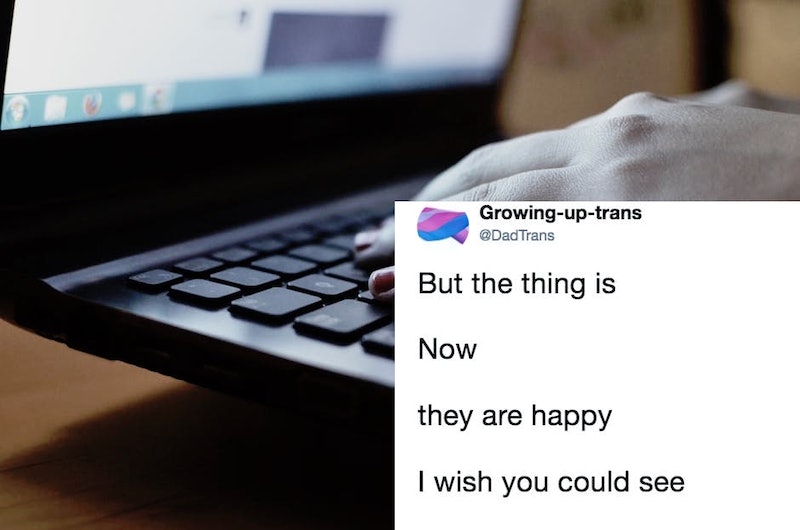 Raising a child is never easy, but raising a transgender child in the modern day comes with its own collection of highs and lows. One UK family has turned to the power of poetry to cope with a society that challenges rather than supports children's gender exploration. In early November, this mother's poem for her transgender daughter went viral after her husband posted it on Twitter. While most news stories center on the struggles faced by transgender children, the poem focuses on a different point of view: that of the parents whose children are at the heart of debates about LGBT rights.

The couple in question runs a parenting blog, Growing Up Transgender, where they published the poem on Nov. 1. Both parents choose to be anonymous, citing harassment routinely faced by transgender people and their supporters. The mother explained to Bustle over email that she was inspired to write the poem, titled "Finding My Fierce," after listening to a public figure use scientific research to back up questionable opinions. "I spent the morning I wrote this poem in tears having heard a well respected scientist (however, with no expertise in transgender children) misquote research and misinform the public about transgender children," she wrote to Bustle.

Although the transgender community has become more visible than ever over the last decade or so, misconceptions about transgender children, which often masquerade as scientific "fact," are all too common. One of the most common myths is that children who explore their gender identity in their youth will change their minds later — which brings down a world of criticism on the parents who support a transgender child from the beginning.

"The continual scrutiny, hostility and abuse directed at parents who are following medically and evidenced international best practices to support their child is sometimes overwhelming," Growing Up Transgender continued. "Writing this poem was a form of self-therapy to help me to reflect on what's important, keep my head held high, and stand up for my wonderful daughter (who happens to be transgender)."

Written from her point of view, the poem reflects on how it feels to watch total strangers debate the validity of her child's existence.

Another scare story, platform of hate

Day after day another attack

The mindless celebrity, the scientist quack

All spouting distortion, spitting out lies

They don’t know the facts, yet pretend to be wise

They couldn’t care less about my child and their friends"

It goes on to send a pointed message to other parents who have looked askance at her child or questioned her decision to raise her child as a girl.

"I see how you stare on the playground each day

Eyeing the dress, judging the way

That I raise my family

It couldn’t happen to you

With your conforming children"

Finally, she concludes that despite the challenges of raising a transgender child, they need adult allies to "stick up for them / fight the battles to come."

After the poem was published, her husband was so proud he posted it on Twitter, where it was met with a warm reception. Some users commented to say that as parents of trans children themselves, they related to the poem's message, while others simply applauded its honesty.

In a world where transgender youth are some of the most vulnerable people out there, research has shown that parental support is incredibly important in protecting their mental health. Unfortunately, that support is often missing, even in 2017.

So does Growing Up Transgender have any advice for parents whose children are transgender or question their identities? "All parents want the best for their children," she writes. "Listen to your child and support them whoever they may turn out to be."

To read "Finding My Fierce" in its entirety, head over to Growing Up Transgender.

More like this
The Case For A Hard Launch Summer
By Morgan Sullivan
10 Times Boris Johnson Got It Wrong On Trans Rights
By El Hunt and Sam Ramsden
TikTok Is Using A ‘Love Island’ Sound To Expose Their Weird Crushes
By Courtney Young
What Is “Night Luxe?” Breaking Down TikTok’s New Aesthetic
By Courtney Young
Get Even More From Bustle — Sign Up For The Newsletter