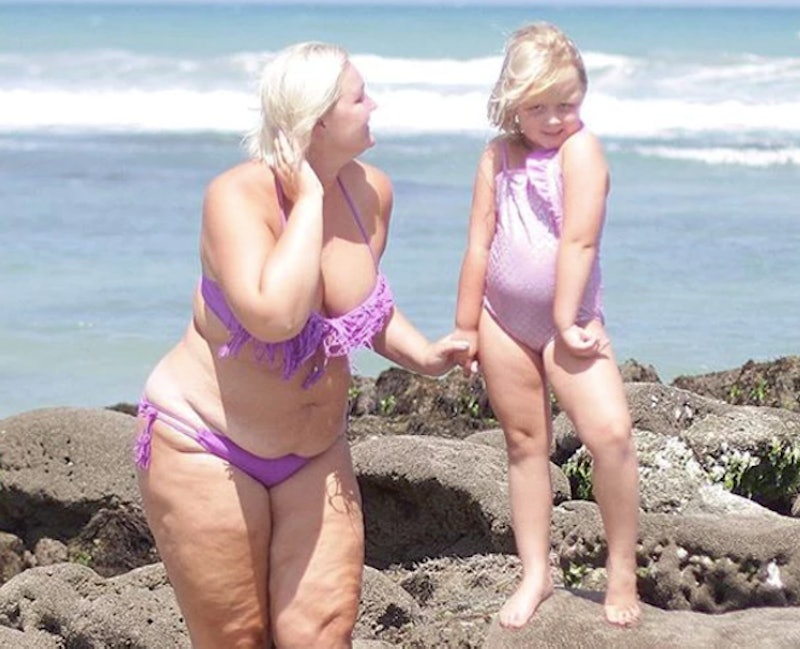 In 2017, there is still an impressive stigma on the word "fat." Fortunately, women like Allison Kimmey are not only breaking that stigma down, but also priming the next generation to appreciate the word for its full and true meaning. Kimmey, an international self-help author and speaker, "swimwear and plus size fashion connoisseur," and mother, runs the popular Instagram @allisonkimmey, which largely features photos of her living her best life in trendy bathing suits and summery outfits. But most recently, her Instagram has gone viral for her powerful response to her daughter calling her fat, which provides perfect instruction for all parents navigating how to explain the concept of fatness to their children in a constructive and meaningful way.

Kimmey shared a picture of herself with her daughter following a conversation they had at the pool. When Kimmey told them it was time to leave, her daughter, upset, told her brother that their mother was fat. Concerned that the word was coming from a place of insult rather than what it is — a descriptor, and something that all people have in various forms — Kimmey sat her daughter down to discuss what exactly the word "fat" means, and what should and shouldn't be associated with it.

In the caption, Kimmey describes how she and her daughter spoke about how fatness, in her eyes, is not something a person is, but rather something that they have — and most importantly, that fat is not in any way tied to inherent moral goodness or worth, despite the mixed messages children often receive indicating otherwise.

"Each moment these topics come up I have to choose how I'm going to handle them. Fat is not a bad word in our house. If I shame my children for saying it then I am proving that it is an insulting word and I continue the stigma that being fat is unworthy, gross, comical and undesirable," wrote Kimmey in her powerful post. "Since we don't call people fat as an insult in my household, I have to assume she internalized this idea from somewhere or someone else. Our children are fed ideas from every angle, you have to understand that that WILL happen: at a friend's house whose parents have different values, watching a tv show or movie, overhearing someone at school — ideas about body image are already filtering through their minds. It is our job to continue to be the loudest, most accepting, positive and CONSISTENT voice they hear. So that it can rise above the rest."

The truth is, stigma against fatness begins at a very young age — and for the most part, are entirely conditioned by societal cues. Studies have shown that kids not only ascribe fatness to undesirable qualities at a young age, but also engage in fat-shaming their peers — acting on preconceived notions that have the power to affect their targets for an entire lifetime.

Thankfully, with role models like Kimmey spreading messages of positivity and truth, we're always taking steps in the right direction to reclaim and destigmatize the word fat not just with adults, but with the next generation, as well.

More like this
25 Quotes About Love To Share During Pride Month 2022
By Madeleine Aggeler and Emma Garza
What Does “Gatekeeping” Mean On TikTok? The Viral Term, Explained.
By Courtney Young
TikToker Kate Glavan Has The Antidote To The “Hot Girl Walk”
By Alexis Morillo
What Is “Night Luxe?” Breaking Down TikTok’s New Aesthetic
By Courtney Young
Get Even More From Bustle — Sign Up For The Newsletter