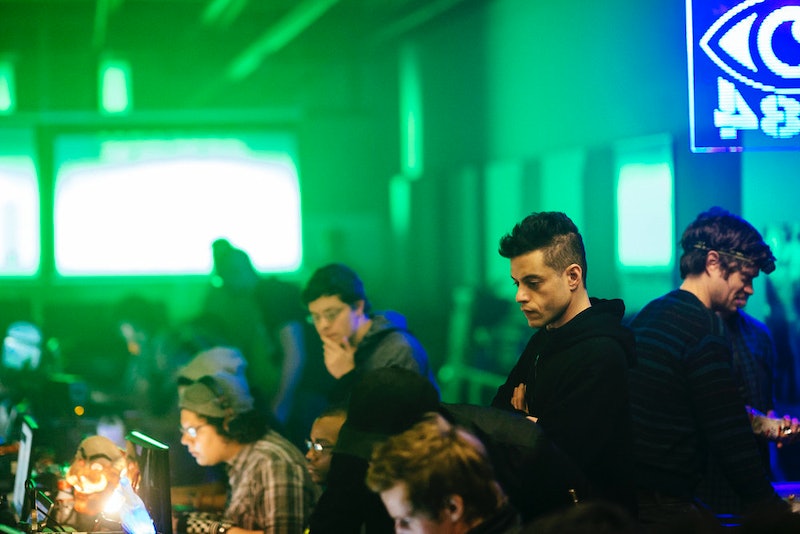 To say that Mr. Robot is a complicated show is a massive understatement. The show's twisting narratives and flexible reality make it difficult to follow but supremely satisfying to solve. This Mr. Robot Season 2 recap will bring you up to speed on what happened so you'll be prepared for the Oct. 11 Season 3 premiere. The USA series' mystery box storytelling is sure to get even twistier with this new episodes, and viewers may be tempted to rewatch the previous season just to try and remember what happened in the wake of the 5/9 hack. But time is running out, and this rundown will give you all the essential info.

If Mr. Robot Season 1 was defined by characters coming together and finding each other, then Season 2 was defined by characters being spread apart. Season 1 found a variety of people forming a community alongside Eliot Alderson under the lead of Mr. Robot to carry out the 5/9 hack, and followed them as they all went their separate ways and tried to stay undercover after successfully destabilizing the U.S. Economy and E Corp. Season 1 ended with some major revelations — including the reveal that Mr. Robot is actually the identity of Eliot's father and an invention of Eliot's mind, who sometimes "takes control" of the hacker; Darlene is Eliot's sister; and that E Corp employee Tyrell Wellick was working alongside Mr. Robot to bring down the company with assistance from Chinese hacker group, the "Dark Army".

While Season 1 had some engaging, shocking mysteries, Season 2 doubled down with more shocking twists and major questions. Here's what you might have missed:

What Happened To Eliot?

In the season's largest twist, Elliot spends the first half of Mr. Robot Season 2 in prison — although it doesn't look like prison, initially. Elliot lies to the audience, and makes it appear as though he's living in his mother's house while he's incarcerated. In prison, he tries to suppress Mr. Robot's influence over him by following a strict routine and gets access to a computer where he can help fsociety from behind bars. He's recruited by a warden to help fix a website on the dark web intended for the illegal sale of guns and drugs, as well as facilitating sex trafficking. Eliot sells out his warden to the FBI and is set free. Upon being freed he is attacked by the warden's criminal partners, who are quickly taken out by Leon, Elliot's sole friend in the joint. It is revealed that Leon is an assassin for Dark Army who was tasked to protect Elliot.

What Happened To fsociety?

With Elliot in jail, Darlene takes control of fsociety and tries to finish the job that Elliot started. While the global economy took a major hit from the 5/9 hack, fsociety's true target, E Corp, was left relatively unscathed. So Darlene continues to hack the company, but things begin to get too dangerous for fsociety's other members. Romero is killed; Cisco begins working as an agent for the Dark Army; and Mobley and Trenton escape to live in hiding. Eventually, Darlene is left as the only member of fsociety and is being pressured by FBI agent Dominique DiPierro. After Cisco, Darlene's boyfriend, is killed in an ambush that Darlene survives, Darlene is interrogated by Agent DiPierro. She shows Darlene a massive board that reveals that the FBI knows about everyone who is involved with the 5/9 hack, including her and Elliot. At the end of the season, it is revealed that Mobley and Trenton successfully started new lives undercover, and Trenton believes she has found a way to stop the hack. During their conversation, they are approached by Leon.

What Happened To Angela?

After accepting a job at E Corp at the end of Season 1, Angela's life takes a turn for the corporate. While Angela once wanted to take down E Corp as revenge for causing her mother's death via a toxic waste incident, she eventually settles and works her way up the E Corp ladder. However, when it's revealed that she's being targeted by the FBI, Angela agrees to help Darlene hack E Corp from the inside to try and cover up her own involvement in 5/9. When she realizes that even hacking E Corp might not be enough to save her from the FBI, she confesses to Elliot that she intends to come clean. However, she is kidnapped by the Dark Army and speaks to Whiterose, the leader of the Dark Army, who attempts to persuade her to work with them.

What Happened To Tyrell?

Of all the mysteries of Season 2, none was larger than the question, "Where Is Tyrell Wellick?" Tyrell disappeared at the end of Season 1 and spends most of Season 2 still out of the picture. Over the course of Season 2, his wife Joanna receives a phone call and a few mysterious gifts that she believes to be from Tyrell. It's revealed that these actually came from Scott Knowles, Tyrell's former rival, as revenge for Tyrell killing Scott's wife. Joanna insults Scott's deceased wife until he begins to beat her — and Joanna immediately starts crafting a way to get revenge on Scott.

Tyrell doesn't actually reappear until the season finale, where Elliot — who believes that Mr. Robot killed Tyrell — ends up taking a cab ride with him and ends up in an abandoned where Tyrell says "Stage Two" is underway. That involves destroying all of E Corp's paper records. The plan was dreamt up by Mr. Robot, Tyrell, and the Dark Army, but Elliot cannot abide by it because it involves the death of innocent people who'll be in the recovery center when they blow it up. Elliot begins to undo the hack, causing Tyrell to threaten him with a pistol. Elliot, convinced that Tyrell is not real, doesn't stop. Tyrell eventually shoots him, leaving Elliot unable to stop Stage Two. Tyrell calls Angela, who seems to be aware of the plan, distraught over having to shoot Elliot. Angela assures Tyrell that he "did what needed to be done," and insisting that she "should be the first person [Elliot] sees when he wakes up."

That cliffhanger ending leaves a lot of doors open for Season 3. Will Darlene help the FBI? Is Angela working with or against Elliot? Will Leon kill Trenton and Mobley? What is going on with Whiterose? What is Joanna's plan? It wouldn't be Mr. Robot if the show wasn't juggling multiple mysteries simultaneously, with no guarantee of getting an answer anytime soon. But that's the fun of it.