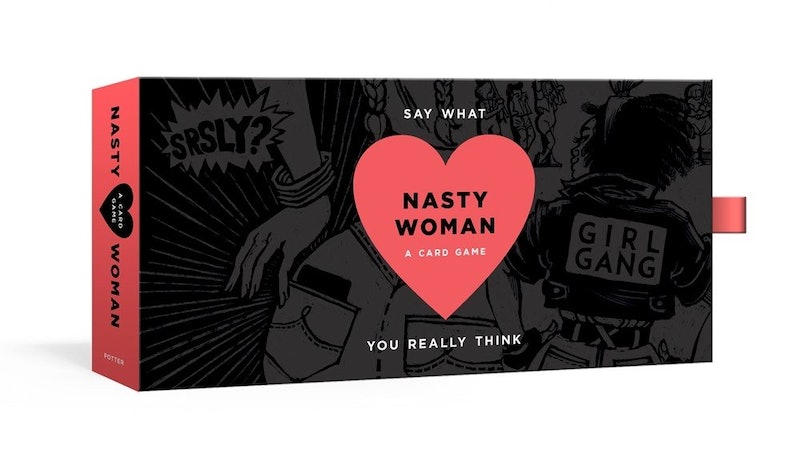 After a long, hard day of being a Nasty Woman, sometimes you just want to come home, kick back, relax, and continue being so, so Nasty. Behold, The Nasty Woman Game, a card game that’s described as “Cards Against Humanity with a feminist twist” or “Exploding Kittens meets Rad Women.” Basically, it’s the kind of casual, funny, frustrated, empowering socio-political conversations you’re already having with your friends in card game form.

Amanda Brinkman of Shrill Society is to thank for this new game that pairs well your closest friends and drink of choice. You’ve likely already seen Brinkman’s work while scrolling through your Instagram feed or following your favorite feminist celebrities at Women’s Marches across the country. Shrill Society is the creator of the original Nasty Woman t-shirt which went viral after it was sported by everyone from Katy Perry to Will Ferrell to Julia Louis-Dreyfus. With 50 percent of the shirts’ proceeds going to charitable organizations, according to their website, Shrill Society has helped raise over $136,000 for Planned Parenthood, the ACLU, the Houston Food Bank, Unidos Por Puerto Rico, and She Should Run.

Last October, around the one year anniversary of the Nasty Woman t-shirt, Brinkman created a Kickstarter for a card game that combines politics and pop culture to allow people to say what they’re really thing. “In making the shirt and hearing from thousands of women around the world,” Brinkman writes on the Kickstarter page, “I realized there was a community who wanted to be in conversation with one another, fight back, and have fun.”

Like the aforementioned Cards Against Humanity, The Nasty Woman Game is a social card game. Players take turns drawing cards, hoping to avoid cards like “Attack of the All Lives Matter sympathizer” and the dreaded Trump Card. As you go, you want to collect Nasty Woman cards, which feature feminist throughout history from Ida B. Wells to Ruth Bader Ginsburg to Serena Williams. There are also Statement Cards, similar to the typical Cards Against Humanity cards, where players have to finish a prompt like, “Rejoice!!! It’s 2030. Women can finally: .” The goal is to be the last Nasty Woman standing at the end of the game.

For its initial iteration, the game comes with 110 cards. However, they’re hoping to expand with additional card packs in the future. The cards feature the artwork by illustrator Erin K. Wilson. The Nasty Woman Game is ideal for parties of three to nine people who are down to dedicate an hour to catharsis through a card game. Unlike Cards Against Humanity, its accessible for ages 12 and up. Plus, any explaining that goes on within the game will involve things like giving a quick history on Angela Davis rather than, say, “Harry Potter eroitca.”

For a more in-depth tutorial on how to play the game, let Brinkman explain in her own words in her Kickstarter video or the video below.

The game launched at the end of July through Penguin Random House. You can buy the game for $17.99 through places like Amazon and Target. However, if you purchase the game through the Shrill Society website, a portion of the proceeds made in 2018 are donated to five different nonprofits: Planned Parenthood, She Should Run, Ida B. Wells Monument, Sylvia Rivera Law Project, and Honor the Earth. In 2019, Shrill Society will be choosing five new nonprofits to support.

The Nasty Woman Game is part comedy, part strategy, part conversation starter, and all in good, feminist fun. “Nasty Feminist also puts the power of comedy back into the player’s hands,” the Kickstarter explains. “Instead of relying on racism, sexism, misogyny, and transphobia like some other social games, Nasty Feminist doesn’t make its players the punchline. Instead, players are given the spotlight to generate their own responses, tell their own jokes, and set the tone that works for them and their friends.” So it’s nasty. But the good kind of nasty.